Getting started with your telescope – Which way is up?

Anyone starting out in astronomy now and buying their first telescope will probably find that it comes with the ability to point at any object in the sky with the touch of a button. This GoTo facility, as it is known, is a relatively new phenomenon, certainly on cheaper or smaller telescopes, and follows the increased power and reduction in cost of computers generally. 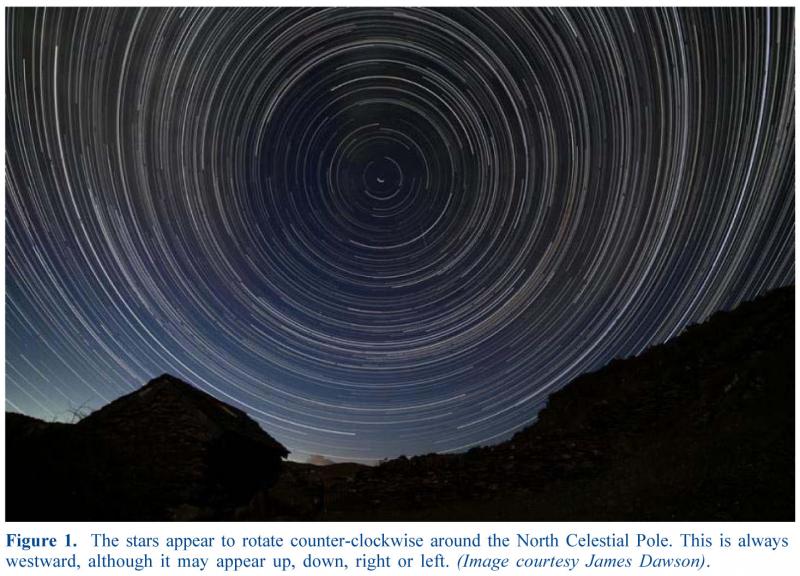 Before the age of GoTo many telescope mounts were fitted with setting circles which, once correctly aligned, allowed the observer to locate any object by moving the telescope until the correct RA (Right Ascension) and Dec (Declination) was displayed on the circles, RA and Dec being the equivalent in space of longitude and latitude on earth. For an explanation of RA and Dec see Paul Abel’s tutorial in the 2016 April Journal (https://britastro.org/journal_item/7245) and for different types of telescope mounts his tutorial in the 2016 February issue (https://britastro.org/journal_item/7108).

But what if you don’t have GoTo or setting circles, how do you find your target? For this there is a time-honoured way of bagging your quarry known as Star Hopping. Simply put, you ‘hop’ from star pattern to star pattern using maps or star charts until you reach your target.

Image orientation
Star hopping is not difficult and can be very rewarding, but it does take practice and what is essential is that you know the orientation of the image in your eyepiece – is north up, south up, east to the right or west to the right – or some combination of these? Without this information it is impossible to relate the eyepiece view to the star chart that you are using.

So why this confusion? After all, with a normal pair of binoculars you will see an image you are familiar with. Top will be at the top and anything to the right will appear on the right. You will see the same as a naked eye view but magnified.

So why is it different in a telescope? The simple answer is because different telescope types, such as reflector, refractor or Cassegrain, have different optical configurations. Of course it is possible to add extra lenses or mirrors to turn an image the ‘right way up’, but any extra glass will reduce to some extent the light getting through to your eye (or camera) and frequently in astronomy light is at a premium. And, of course, what is the right way up in space anyway? This strange eyepiece orientation problem can be very confusing for beginners and even if your telescope is equipped with GoTo it is worthwhile understanding why the orientation is the way it is.

When we look at the night sky from north temperate latitudes north is not overhead but towards the north celestial pole, the point about which the sky appears to revolve. This is very close to the aptly named Pole Star (alpha Ursae Minoris). South is then in the direction exactly opposite to north. So when you are observing and you want to find north, just nudge the telescope towards Polaris and north is the direction from which new stars enter the field of view. The east/west line is then at 90° to this north/south direction. But which direction along that line is west and which direction is east? Luckily there is an easy way to find out.

Because the Earth spins from west to east it gives the impression that the sky rotates from east to west. With the telescope drive (if you have one) switched off, east is always the direction from which new stars enter the field of view.  Unfortunately there is another complication because the direction in which new stars enter the field depends upon where the telescope is pointing. Most people are familiar with photographs of star trails showing stars wheeling around the pole. All these stars are moving westwards but the ones above the pole are moving in exactly the opposite direction to those below the pole (Figure 1). So, if you are observing near to the pole and your telescope is pointing just below it, west will be in the opposite direction from if it is pointed just above the pole.

Confusing? Yes, possibly, but really only if you are trying to relate directions in the sky to those on the ground. If you are using an equatorially mounted telescope aligned on the pole the situation is somewhat easier as the positions of the cardinal points in the eyepiece remain fixed as the telescope is moved around the sky – important for long exposure photography. 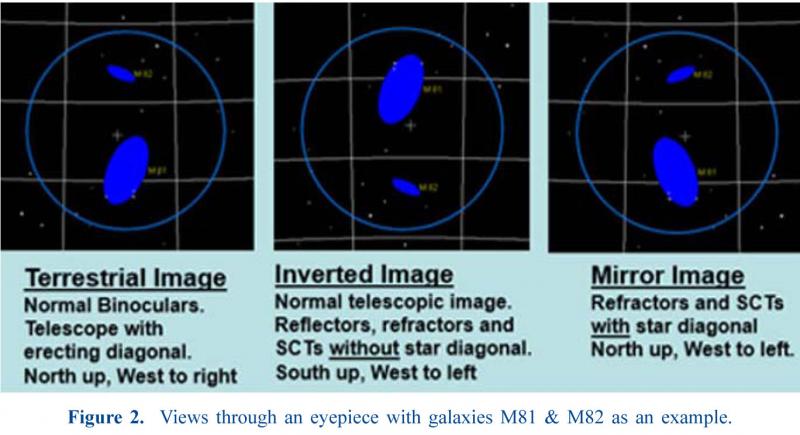 With an altazimuth mount, however, such as a Dobsonian or a simple tripod, these positions move as the telescope is moved, an effect known as field rotation. It might be thought from this that an equatorial mount is vastly superior to an altazimuth mount, but life is not so simple and whereas the eyepiece of a Dobsonian telescope can always be at a very convenient position, that of an equatorially mounted Newtonian, certainly if observing near the pole, is usually close to being the most inconvenient position possible.

To consider how eyepiece image orientation is affected by telescope type we will consider the view of the galaxy pair M81 and M82 in Ursa Major as seen through different telescopes (for a basic description of common telescope types see another of Paul Abel’s tutorials, in the 2015 October Journal (https://britastro.org/journal_item/6712).

In Figure 2 there are three possible image orientations. The first, on the left, can be regarded as a terrestrial image and is known as an erect image. It is what would be seen using traditional binoculars, i.e. binoculars that would be used for daytime terrestrial viewing where everything is the correct way up and nothing is reversed. In this case, looking at this galaxy pair north would be up and west to the right. This is also the orientation that a small ‘birding’ refractor would give – it would be confusing to see birds upside down and light is not normally at a premium when bird-watching.

An astronomical refractor however would not normally show this orientation unless it was fitted with an erecting diagonal. Instead the image would be as seen in the middle figure, known as an inverted image. This is also the view that a traditional Newtonian reflector would give and it can be seen that it is identical to the first image except that it has been rotated through 180°. South is now at the top and west to the left. In the final figure (right hand side) the orientation is as seen through a refractor or Schmidt-Cassegrain telescope fitted with a star diagonal. Here, no amount of image rotation will give the view as shown in the other figures as it is a mirror image. North is up, as in the first view, but west is to the left.

Before the advent of charting software, observers whose telescopes were equipped with diagonals giving a mirror image and who wanted to relate their eyepiece view to a star map, were advised to turn the map over and shine a light through it from behind, thereby viewing the map as a mirror image. I’m not sure if anyone ever had success with this procedure – I’ve never tried it – but users of star diagonals will be relieved to know that modern software has made the procedure redundant and charts can now be printed in any format necessary.

A mirror image occurs in any optical system that reflects light an odd number of times, so removing the star diagonal from a refractor or Schmidt-Cassegrain would give a standard inverted image as seen in a Newtonian. Although this would make the image easier to interpret, it would also involve gymnastics and neck stretching in getting your eye to the eyepiece if the telescope was pointed at any significant angle above the horizontal. This is easy to imagine by looking at the working end of the refractor in Figure 3.

Many beginners are confused by the fact that on star maps (and on planispheres) east and west are reversed compared to their positions on normal terrestrial maps. The explanation is that whereas terrestrial maps are viewed from above – with you looking down on them – star maps are used as though held above your head and so are looked at from underneath. This reverses right and left or, more accurately, east and west. 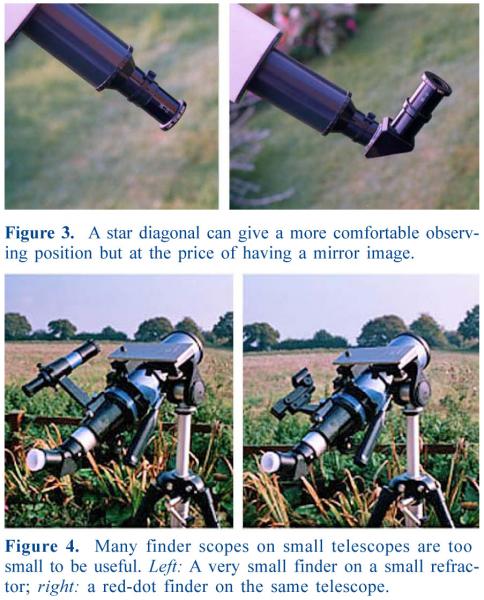 Finder scopes
Most telescopes are fitted with a small finder scope mounted parallel and optically aligned (collimated) with the main telescope tube (Figure 4). Finders are rather like one half of a pair of binoculars and their purpose is to give a wider field of view of the sky than would be seen through the main telescope, thus helping in finding targets or showing you exactly where your telescope is pointed. Often though, certainly on small refractors, the size of the finder is too small to be useful and it is much easier to simply put a low power eyepiece in the main telescope. To be of any serious use a finder should have a size around 10×50, that is x10 magnification with a lens diameter of 50mm.

My small refractor (70mm f/6) gives a field of view of almost 4° when fitted with a 24mm eyepiece (see Figure 3). This is eight times the diameter of the full Moon and the same field as my 15×70 binoculars. It does not need a finder scope. However, what can be extremely useful on any telescope is a zero-power device such as a red-dot finder. Looking through it will show you a naked eye view of the sky with the addition of a red dot superimposed, telling you exactly where your telescope is pointed (Figure 4 right hand side). Usually the intensity of the dot can be adjusted so you can reduce the brightness when you are fully dark adapted and also, in some cases, the dot can be made to flash. 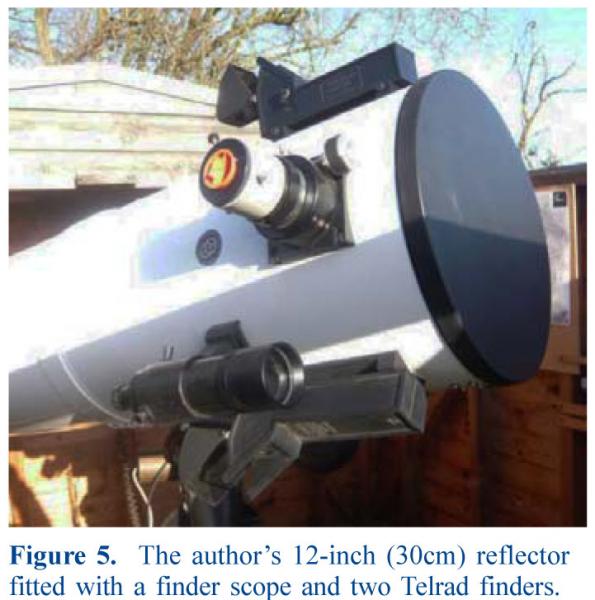 Similar, but slightly more sophisticated than a red dot finder, is a Telrad. This is another zero-power finder that shows you a naked eye view of the sky, but instead of just projecting a small dot, projects three concentric rings, 0.5, 2.0 and 4.0° in diameter. Some charting software e.g. the deep-sky program MegaStar, allows you to add Telrad circles to your finder charts in addition to eyepiece circles. The author’s 12-inch (30cm) Newtonian (Figure 5) is fitted with two Telrads (with dew shields) along with a traditional finder. Often, with a good star chart and a Telrad, no other finder is needed. When I visited the 60-inch Hale telescope on Mount Wilson a few years ago I was amused to see a Telrad fitted next to the eyepiece holder!

Conclusion
Knowing the direction in which your telescope is pointing may seem complicated at first but with practice it soon becomes second nature. This knowledge and a suitable means of aiming the telescope will enable you to find your way around the sky and begin to discover the many interesting sights visible in even a small ’scope.

Stewart L. Moore
Stewart is a former Director of the BAA Deep Sky Section. He is a keen visual observer who prefers using a pencil and paper to a CCD and computer.