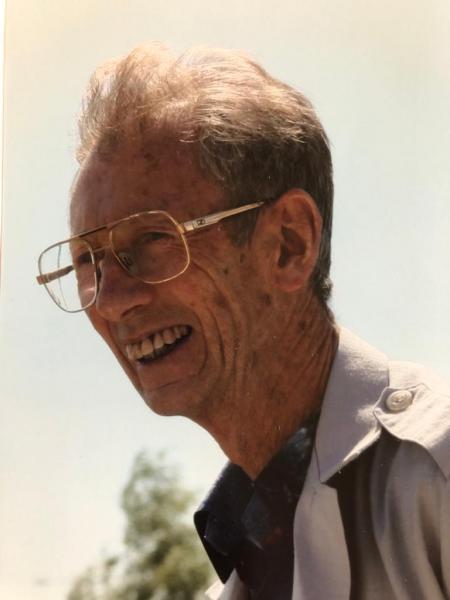 The Association lost a senior figure with the death of Gordon Taylor on 2020 Mar 15 at the age of 94. He was Director of the Computing Section for many years, served a term as President from 1968 to 1970, and was widely regarded to be the ‘father’ of planetary and lunar occultation predictions. He was elected a member of the BAA on 1945 Mar 28.

Gordon, whose autobiography is published in the Journal for Occultation Astronomy.1 attended Solihull Grammar School but following the death of his father was moved to Cotham Secondary School, Bristol. In 1941 May his home was destroyed by a bomb, but luckily that night he was staying with his aunt. At 16 years of age he joined the Home Guard. Then, in 1942 December, he read in the Bristol Evening Post about a new astronomy group being formed, and joined it. This group became the Bristol Astronomical Society (BAS). When in 1943 he was called up to join the RAF, he handed in his BAS membership card, which remains in the Society’s archives to this day.

When Gordon was demobbed from the RAF he remained a civilian meteorologist, until being transferred to the Nautical Almanac Office to work in the Occultation Section. The office in Bath was moved to Herstmonceux Castle, Hailsham in 1949, and then absorbed into the Royal Greenwich Observatory (RGO). He started as a scientific assistant using the occultation machine designed by J. D. McNeile. Once during the machine’s operation Gordon broke a tooth on the back of the Moon carriage, but his claim for industrial injury compensation was turned down.

In 1951 he was married to Violet, who also worked at the RGO. This was the same year that his first scientific paper was published. Later, in 1975, he designed an equiangular sundial which is in the grounds of Herstmonceux Castle and commemorates the third centenary of the RGO.

Lunar occultations were events that could be timed by the amateur and reported to Her Majesty’s Nautical Almanac Office (HMNAO). Predictions for planets and asteroids occulting stars (and also for occultations of asteroids by the Moon) were first published in the Association’s 1953 Handbook, in an article written by Gordon describing the work of HMNAO. His Presidential Address in 1970 December described the state of the art. Many of the techniques covered are currently being used by both amateur and professional observers.

In 1950 Gordon was thinking about lunar occultations of the larger minor planets, but with little observational success. By 1952 their orbits were sufficiently improved to allow predictions for occulting stars. The first confirmed observation of an asteroidal occultation was that of BD –5°, 5863 by Pallas on 1961 Oct 2, recorded at Uttar Pradesh State Observatory, India with a duration of 25.5s.

The 1966 Handbook contained predictions for Juno and Vesta, described as appulses that could result in occultations. Indeed, the initial predictions had large uncertainties in location, but accuracy was to improve using updates obtained with the astrograph at the RGO. At the Association’s Ordinary Meeting on 1980 Jan 2, Gordon reported that predictions of occultations by minor planets were now proving to be very successful. On 1979 Dec 11 an occultation by Juno was recorded by 12 stations, more than for any other minor planet in the solar system at the time. Gordon did not observe an asteroid occultation himself, although he may well have tried.

When Gordon addressed the BAA Ordinary Meeting of 1959 Jun 24 at the Royal Institution, he explained the importance of planetary occultations where the atmosphere, diameters and positions can be measured. He predicted an occultation of Regulus by Venus on 1959 Jul 7, and beta Scorpii by Jupiter and Io on 1971 May 14. Both provided important new information and the diameter of Io was revised from 3,200km to 3,659km.

This was followed by a prediction for epsilon Geminorum by Mars on 1976 Apr 8, which was widely observed although it was at low altitude from England. As a member of the IAU and Chairman of the Working Group for Stellar Occultations by Planets, Gordon was brought in to calculate the position and timing for the Kuiper Airborne Observatory (KAO) which was being used to observe the occultation at 41,000ft. ‘Fortunately I got it right’, he said in his autobiography.

In the course of his research he published a prediction of an eighth-magnitude star being occulted by Uranus on 1977 Mar 10, which resulted in the discovery of five rings.

Within the BAA his amateur interests were concentrated in the Computing Section, being the longest-serving Director (1974–2009). He used his programming skills to create MS-DOS programs for lunar occultation predictions that could be used at home on personal computers. This was an advance over the two-station predictions given in the Handbook. Gordon’s interests were wide-ranging, including sundials and the aurora.

He was also an observer of grazing lunar occultations, as well as providing the predictions for them. On 1977 Apr 26, Gordon observed the graze of 50 Cancrii where the shadow passed near Arundel, Sussex: an event that was successfully reported to the RGO from 53 mobile telescopes set up by local astronomical societies in southern England.

Gordon was an honorary life member of Eastbourne Astronomical Society, and also helped form the Swansea Astronomical Society in 1948, later becoming Life President. He received many awards, including the BAA Merlin Medal and Gift in 1962 and 1979, an ‘outstanding contribution’ award in 2009 from the BAA, and the 2014 David E. Laird Award of the International Occultation Timing Association (IOTA). A main-belt asteroid, (2603) Taylor, is named in his honour.

Gordon was an outstanding runner in the 50s to 80s veteran age groups, usually winning fun runs and 10Ks. Sport was particularly important to him. He played table tennis, mainly in the first division of his local league, and he followed these pursuits with the same deliberation as he did astronomy.

I became an occultation observer myself, meeting Gordon at BAA Winchester Weekends and on the Monte Umbe eclipse cruise in 1973. There he demonstrated his skill in table tennis and chess, taking on friendly competition from eclipse chasers.

Gordon was instrumental in helping transform the prediction of occultations into a modern science, probing distant objects in the solar system and beyond.

Grateful thanks are due to Gordon’s son Trevor and Richard Miles for additional background information.