The annual Perseid meteor shower is among the most reliable of the year, producing an abundance of fast, bright meteors on generally warm summer nights. In 2013 August we can expect another fine display and the good news is that there will be little or no interference by moonlight, with New Moon occurring on August 6 and first quarter on August 14.

Indeed, the Perseids and the other lesser annual meteor showers that peak in late July or early August are particularly well placed with regard to the Moon this year. The Delta Aquarids, Piscis Australids, Alpha Capricornids, Iota Aquarids and the rise to maximum and peak of the Perseids may all be observed under dark skies. Watches carried out any time at the end of July and in early- to mid-August are all likely to produce good observed rates.

Perseid meteors may be detected as early as late July/beginning of August and until about August 21. The shower’s activity displays a marked ‘kick’ around August 8–9 and steadily increasing observed rates can be expected in clear, dark skies, from this date onward until the peak, which is expected at around 18h UT (19h BST) on August 12 this year. The two nights of Sunday night to Monday morning (August 11–12) and Monday night to Tuesday morning (August 12–13) will probably be equally productive for observers in the UK.

Observers watching after midnight on August 11–12 should experience increasing activity towards dawn, as the shower radiant at RA 03h 13m, Dec. +58° (near the Double Cluster, on the Perseus–Cassiopeia border) climbs higher in the eastern sky. Activity should only just be starting to decline by the time darkness falls on Aug 12–13. Weather permitting, observers should try to cover shower activity even on nights away from the maximum, for example on Friday night to Saturday morning (August 9–10) and Saturday night to Sunday morning (August 10–11).

Visual meteor observing requires little in the way of equipment. The observer should dress warmly, find a dark site away from any lights, and recline on a garden chair or similar support so that the sky at 50° altitude can be watched in comfort. Our visual meteor report forms, available as downloads in both pdf and Excel formats from the Section website http://britastro.org/meteor/, enable observers to record the details of each meteor seen. These include: time of appearance (UT); apparent magnitude (brightness); type (shower member, or random, ‘background’ sporadic); constellation in which seen; presence and duration of any persistent train. Watches should ideally be of an hour’s duration or longer (in multiples of 30 minutes). Observers are reminded to carefully record the observing conditions and the stellar limiting magnitude, and should also bear in mind the nightly eastwards ‘drift’ of the Perseid radiant due to Earth’s orbital motion. In early August, the radiant is 15° west of its position at maximum (given above), to the north of Andromeda.

The best observed rates are found when the Perseid radiant is highest in the sky during the pre-dawn hours, but even in early evening the radiant is already at quite a favourable elevation above the horizon. Under cloudless skies, and at dark sites, observers can expect to see between 50 and 70 meteors each hour near the peak. Even in towns or cities observed rates may still be around ten an hour in the early morning hours when the radiant is high.

The Perseids are an ideal target for digital imaging. With a tripod-mounted camera, lens (usually a wide-angle) at full aperture and a high ISO setting, the observer hopes that a bright meteor will flash through the field of view while the shutter is open. Digital SLR (DSLR) cameras are very efficient at collecting background light from the sky, particularly at a setting of ISO 1600, so exposures should be kept relatively short – no more than two minutes’ duration in a really dark, rural location, and probably only 10 to 15 seconds from a more typical observing site. 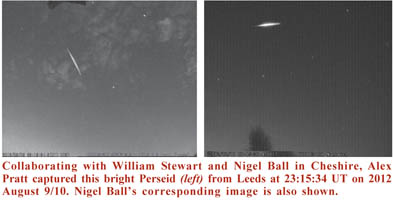 A recent significant shift in observing techniques has involved increasing use of new highly sensitive, high resolution, black and white CCTV video cameras for recording brighter meteors. As shown by the paper published in the June Journal by Alex Pratt, William Stewart and Leonard Entwisle, teams of observers working together can produce valuable two-station video data for shower and sporadic meteors. Meteors are detected and recorded with UFO Capture software and processed by UFO Analyser. From the highest quality data, meteor shower radiants, ground plots and orbital maps are generated by UFO Orbit.

By whatever means you observe the Perseids this year, please e-mail your observations to the BAA Meteor Section at meteor@britastro.org.