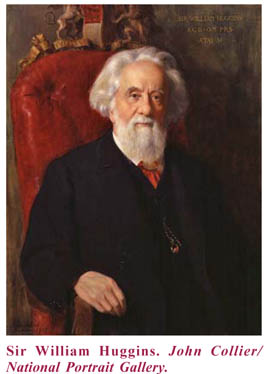 When Charles Messier and his colleagues started their systematic searches for comets in the 18th century it soon became apparent that the sky was littered with nebulous patches, which in many cases looked remarkably like the objects they were searching for. These comet masqueraders, as they came to be known, now form the most popular list of deep sky objects for amateur astronomers: the Messier objects. Messier’s telescopes were low power instruments, ideal for comet hunting but not conducive to examining these nebulous patches in any detail, and in many cases his descriptions of them read merely ‘nebula without stars.’
William Herschel in the late 1700s was the first person to study the ‘nebulae’ in any detail, and extended the number known from the 100 or so (depending on how you count them) catalogued by Messier to over 2000. Herschel knew Messier and visited him in Paris, and it is likely they would have discussed the nature of these mysterious objects. However whereas Messier was interested in discovering comets, Herschel was more interested in the nebulae and soon started a systematic search for them on every clear night, with his sister Caroline recording the observations shouted out by William from his position on the telescope.
With his larger instrument Herschel could see detail that had eluded Messier in many of the nebulae and in many cases was able to resolve them into stars. This led to a feeling amongst some astronomers that all nebulae could be resolved, if only you had a big enough telescope.
Herschel himself seemed initially to agree with this view and it may have been one of the driving forces for the construction of his ‘40-foot’ telescope in 1787.  However, his observation of some planetary nebulae in which a bright central star was surrounded by what Herschel called a ‘shining fluid’ led him to think that perhaps this fluid was not composed of unresolvable stars but was instead a fluid condensing into a star.
No progress was made on the true nature of these unresolvable nebulae until the night of 1864 August 29, 150 years ago this year, when William Huggins turned his telescope to what we now know as NGC 6543, commonly called the Cat’s Eye Nebula.
Huggins was an amateur astronomer of independent means who built a substantial observatory at his house in Tulse Hill, London. After purchasing an 8-inch [203mm] Alvin Clark object glass from W. R. Dawes for £200 and being in his words ‘…dissatisfied with the routine character of ordinary astronomical work, sought about in my mind for the possibility of research upon the heavens in a new direction or by new method.’4 When he heard of the spectrographic work of Gustav Kirchoff he realised that spectroscopy could be the way forward for him to extend these ‘…novel methods of research upon the Sun to other heavenly bodies.’ He continues, ‘A feeling as of inspiration seized me: I felt as if I had it now in my power to lift a veil which had never before been lifted.’ … [continued]