HR Lyr: The fitful slumbers of an old nova 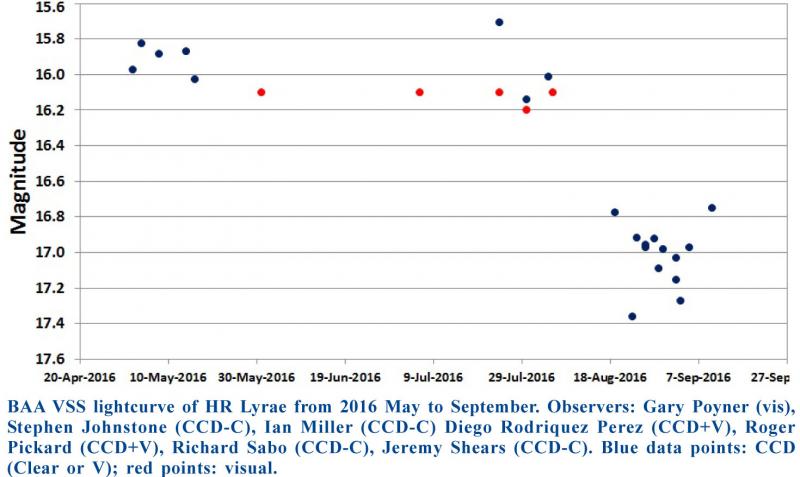 Generally speaking, variable star observers get excited when a star becomes unusually bright. However, that’s not always the case. Cataclysmic variables are a case in point. These are semi-detached binaries in which a cool secondary star loses mass to a white dwarf primary. A stream of gas is drawn off the secondary and, because it has a lot of angular momentum, it doesn’t fall directly onto the white dwarf, but instead forms an accretion disc around the primary.

From time to time the disc goes into a hotter brighter state and that’s when we observe the star to be in bright outburst. However occasionally, accretion becomes much less and sometimes stops altogether, when the star is seen in a faint or low state. Quite what causes the latter is not fully understood. In some cases it is thought to be due to magnetic activity, possibly star spots on the secondary which move to where the accretion stream originates, causing the flow to stop.

In the case of classical novae, sufficient material can accumulate on the surface of the white dwarf to cause a runaway thermonuclear reaction. That’s what happened to HR Lyr on the night of 1919 Dec 6, when it became Nova Lyrae 1919, reaching magnitude 6.5.[1,2] It faded rapidly over the following six weeks and has been in quiescence ever since. A monitoring campaign conducted since 1991 shows the star is generally between mag 15 and 16, but its sleep is not a restful one, with its brightness varying by a few tenths of a magnitude. However, from time to time it fades to around mag 17;[3] we reported such a deep fade in the Journal in 2010.[4]

A new faint excursion began this summer and the accompanying lightcurve shows the behaviour of HR Lyr between 2016 May 2 and September 10, the latest observation before going to press. At its faintest it was mag 17.3. An email alert was issued via the BAAVSS–alert Yahoo group. Time-series photometry by several observers has shown hump-like features of up to 0.3 mag, but these do not appear to be strictly periodic.  Spectroscopy was obtained by Prof. Ulisse Munari of Padua University, using the Asiago 1.22m telescope, which shows some intriguing features that are quite different from those exhibited during normal quiescences of novae.[5]

How long will HR Lyr’s faint excursion last and when will be the next one? The answer to these questions can only be gleaned from further observations. HR Lyr is an easy CCD target and monitoring it would make an ideal project for those who are familiar with the techniques for CCD imaging of, say, deep sky objects. With a small telescope exposures of only ~60 seconds are needed. It can also be observed visually with a 40cm telescope (when in its ‘normal’ state, that is!).
We encourage observers to monitor HR Lyr closely over the next few months. One observation per night is sufficient to cover the general profile of the event; a comparison star sequence can be found on the AAVSO website.[6]