Imaging Mars from Curaçao in 2018

The 2018 apparition of Mars was especially interesting, because at the opposition of 2018 Jul 27 the apparent size of the disc reached a comfortable 24.3 arcseconds (″). Unfortunately, for European observers the planet stood only ~12° above the horizon. From their locations Mars could best be observed in January–February (average altitude ~18°) and November–December (average altitude ~30°). However, during those periods, the apparent size of Mars was only 6 & 10″, respectively.

For observers on the Dutch Caribbean island Curaçao, the situation was quite different. At its latitude of 12°N, Mars stood 40° higher above the horizon. In this paper we describe the fine observing conditions on Curaçao for planets in general and, in particular, the imaging of Mars during the 2018 apparition. The observations of the planet in the early and late phases are complemented with those from the Netherlands. 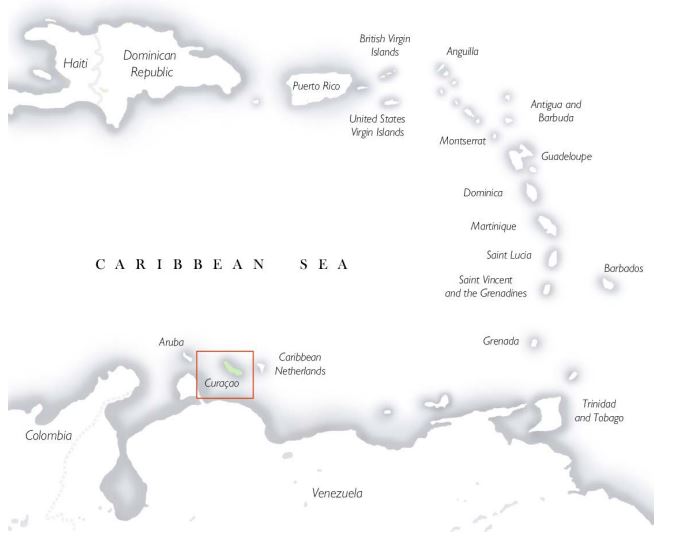 The cameras were equipped with Barlow lenses with magnifications from ×1.5 to ×3. For imaging of Mars, videos in SER format were collected, containing 10,000 frames. The frames were centred with the software program PIPP. Subsequently, the best frames were stacked with Autostakkert 3 and subjected to sharpening using the wavelet functions of Registax 6.1 or Photoshop.

The seeing conditions on Curaçao can in general be characterised as ‘good’ to ‘very good’. The reason for this qualification is the location of the island (Figure 1). The surrounding sea stabilises the atmospheric temperature, which varies over the year from 29 to 32°C. The temperature at night is only a few degrees lower. Most of the year the continuous northeastern trade winds provide a laminar airflow, which also contributes to the stability of the atmosphere and leads to excellent conditions for planetary imaging. The island does not have seasonal atmospheric changes, with the exception of the months November and December when it rains more often than usual and cloudy skies prevent imaging. Curaçao lies outside the hurricane belt, and rarely gets hit.

There is one issue the serious planetary imager must consider: on most nights, the skies are partially clouded (Figure 2). The strong trade winds let these clouds fly across the sky and their presence often interferes with the capturing of contiguous series of red, green and blue videos. Due to these clouds, an RGB series is often incomplete. For that reason, most of the time we used the ASI290MC camera.

Figure 3 illustrates the difference in imaging conditions on Curaçao (latitude 12°N) and in Houten, the Netherlands (latitude 52°N). Clearly, the C8 telescope performs much better than the C14. The C8 result was obtained with an ASI290MC camera; for the C14 image, an ASI290MM camera was used in combination with an RGB filter set.