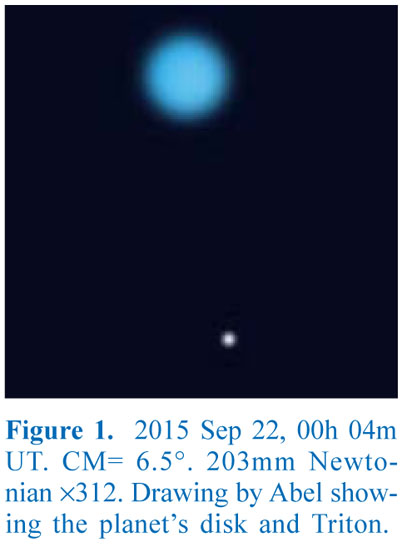 Voyager 2 images and subsequent professional observations using the Hubble Space Telescope or large ground-based instruments have shown Neptune to have an active atmosphere. However depending upon seeing and telescope aperture, the best that most amateurs can do is to resolve the small disk as shown in Figure 1 (This figure is oriented with south upwards as are all figures in this report).

In recent apparitions both David Gray and Stanislas Maksymowicz have reported some lighter areas on the disk but the detection of disk detail has been rare. During the 2014 apparition, Anthony Wesley (Australia) was able to image a bright region on the planet in infrared. Animations derived from his individual images showed that this region moved with the rotation of the planet. This showed that amateurs can now image large storms given suitable equipment. (…continued)