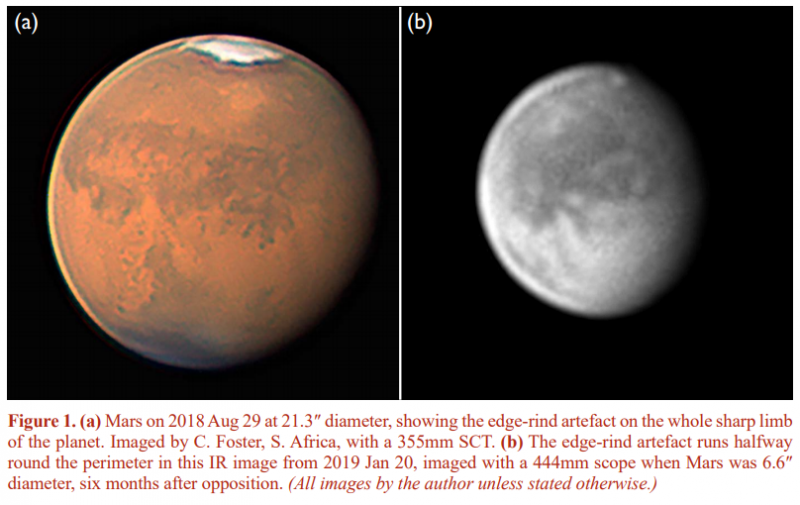 Over the last 20 years or so, digital video imaging has developed to become the leading method for recording planetary detail, allowing amateurs to record levels of detail impossible with film photography and often surpassing those seen by the best visual observers. The method uses a video camera to capture streams of hundreds or thousands of short-exposure digital frames of a target planet. The sharpest frames from these videos are later aligned and stacked to produce a single master frame, where much of the blurring effect of our atmosphere is reduced or averaged out. As the final stack is effectively a very long-exposure image, the noise levels in this master are very low. This allows it to be stretched and sharpened to draw out surface detail without the image suffering unduly from noise issues. In this way, wonderful Earth-based images can be produced of our near neighbours in space.

More recent advances in camera technology and sensor design have led to reductions in levels of image noise and to improvements in image resolution and fidelity. Spurious image artefacts, often originating in the cameras or sensors and a common part of early digital imaging, are now thankfully rarer. Even so, images of the planet Mars continue to be afflicted by a noticeable spurious edge defect, which has been seen since the early days of digital video imaging. This paper discusses the appearance and cause of this persistent effect, which will be referred to as the ‘edge-rind’ artefact.

The Mars edge-rind artefact consists of a narrow darker arc running concentrically with the limb, just inside the sharper non-terminator edge, often occurring in conjunction with a brightening of the region between the arc and the edge of the planet. Examples of a typical edge rind are shown in Figures 1a & b.

Although most commonly seen on images of Mars, the artefact can quite often be seen in a similar form on those of other planets. Mercury can be particularly badly affected, due to its hard edge, small angular size and the fact that it exhibits phases – all of which seem to exacerbate the effect.

In certain circumstances, other types of edge artefact that may be confused with edge-rind can be seen on Mars images. Many of these are chip- or electronic circuit-related – occurring due to electrical ringing or reflection effects at abrupt signal changes, and exacerbated by poor electronic filtering design. Often such electronic ringing effects relate to the Gibbs phenomenon, where a sharp transition can lead to overshoot and the production of sinusoidal variations in an analogue signal at that transition.

In the early days of high-speed video imaging of the planets, one would often come across spurious edge effects that were related to particular cameras or chips and such issues are still to be occasionally found in commercial cameras today. Usually problems occur when cameras are operated with insufficient gain or low image brightness, but sometimes they become apparent when frame rates are too high.

The first of these artefacts that the author came across was the ‘offset ghost’ artefact that used to be seen in cameras having the popular Sony 098 chip and running at the highest frame rate of 60fps. This chip-related artefact was a ghost image seen 11 pixels to the right of any abrupt edge. In Figure 2a, the artefact shows as an arc rather than a concentric ring as it is the same diameter as the planet. Changing the frame rate to 30fps made this artefact disappear completely. 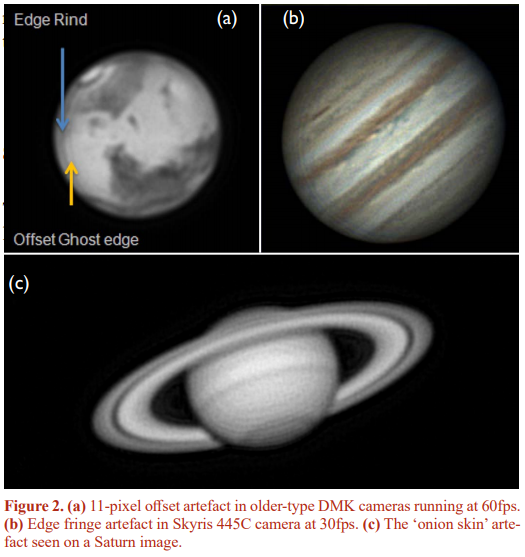 Another chip-related offset artefact is shown in Figure 2b, for a Skyris 445C camera having a Sony ICX445AQA chip. Again this artefact is related to frame speed, appearing at 30fps but being absent at lower speeds.

Other edge artefacts related to gain and brightness settings can be occasionally seen. One such defect is the so-called ‘onion skin’ artefact (Figure 2c), which arises when the video has been recorded at too low an image brightness. The failure to use a good proportion of the full dynamic range of the 8-bit camera (256 levels) means that there are too few grey levels to render the planet in a smooth manner. As a result, it shows a characteristic concentric ring texture, whose shape can be influenced by the brightness distribution on the planet.

Main characteristics of the edge-rind artefact

The artefacts discussed in the previous section relate to particular cameras or chips and camera settings. The edge-rind artefact, however, is far more universal and persistent, its prevalence being the cause of ongoing frustration amongst Mars imagers. The artefact cannot be eliminated by just changing camera settings or camera model and this tells us something about its cause – it must be far more fundamental.

It is useful here to outline the key characteristics and dependencies of the edge-rind artefact, helping to give us clues as to what its cause might be.

Observation shows there to be little or no dependency of the angular width of the edge-rind artefact on the angular diameter of the ‘host’ planet – this width stubbornly stays the same as Mars’ diameter changes, provided that the telescope and wavelength used to image the planet stay the same. As Mars retreats and shrinks, the relative size of the edge-rind increases because its angular size is maintained (see Figure 3). As a result, the effect becomes even more of a distraction as it affects a larger and larger fraction of the planet’s diameter. 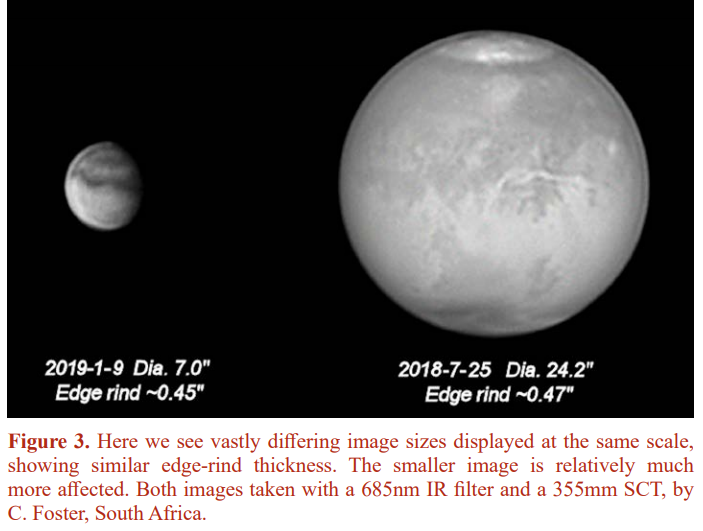 The constant angular width of the artefact means that for different optical amplifications on a given night, the ratio of the edge-rind width to the planet diameter stays the same. This behaviour is illustrated in Figure 4, where altering the choice of Barlow lens makes the planet shrink to 60% of the original diameter on the chip and the edge-rind subsequently changes by the same factor. Such directly proportional behaviour might not be expected if the cause of the edge-rind was a ringing effect in the chip/electronics, arising from the abrupt change in signal associated with the edge of a bright disc. 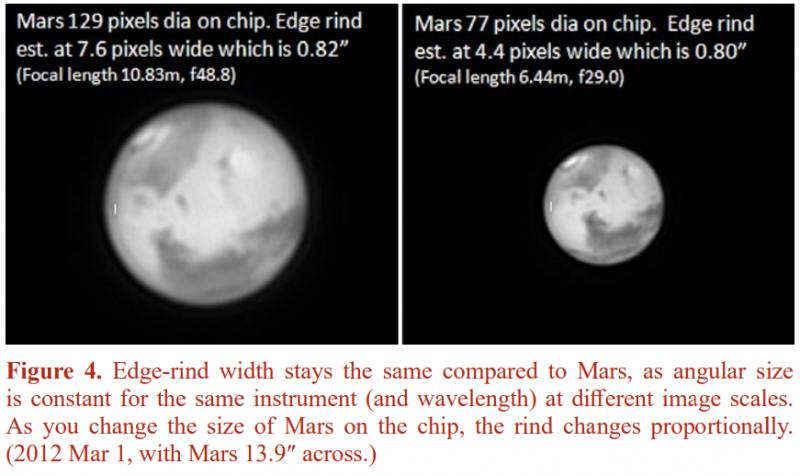 When away from opposition, the artefact always lies along the sharper Martian limb opposite the softer terminator. On this side there is a more abrupt transition from the bright limb of the planet to the dark sky background.

When Mars is close to opposition the limb is sharp all the way round and then the artefact may be seen to occur at any position. Such behaviour is seen clearly in Figure 3 – the image on the left is a month after eastern quadrature, whilst the image on the right is two days from opposition.

A noticeable characteristic of the edge-rind is that the artefact is generally most evident in the red and infrared wavelengths, and less evident at shorter wavelengths. Not only is the intensity quite often stronger at the longer wavelengths, where seeing effects are less evident and the image is thus generally sharper and at higher contrast, but the width of the rind is invariably greater at these wavelengths too. The analysis seen in Figure 5 shows that the width of the edge-rind, from limb edge to the middle of the dark arc, seems to change in direct proportion to the imaging wavelength.

When using a mono camera, imaging through single red, green, or blue colour filters, any edge-rind is seen as a dark arc whose distance from the sharp limb is related to the average wavelength of the colour filter used. If these separate red, green and blue images are later combined to create a full-colour image, the different dark-arc-to-limb separations for each colour can lead to colour fringing. An example of this is shown in Figure 6. If imaging with a one-shot colour camera, which has colour filters of a much wider bandwidth, the greater range of wavelengths can lead to softer, wider dark arcs at each colour. This may lead to less colour fringing, but the increased overlap can make the overall dark arc more obvious in the full-colour image.

Wavelength-dependent diffraction effects are fundamentally part of astronomical imaging. A star observed at best focus in a telescope is not a point source – instead, diffraction causes it to be seen as a small disc surrounded by concentric dark and light rings of decreasing brightness. This is the so-called Airy pattern. The angular size of the central Airy disc in radians (d) depends on the wavelength (λ) and diameter (D) of the telescope’s aperture, linked by the simple relationship d= 2.44λ/D. Empirically the width of the edge-rind, measured from the limb to the middle of the dark arc, appears to stay a fixed ~60% of the telescope’s Airy disc diameter (taken as the diameter of the first dark ring). In Figure 7 we see a direct size comparison between a star’s Airy pattern and edge-rind width. Both images were taken with the same telescope, on the same night, and are presented at the same image scale.

Another key observation of the edge-rind artefact is that its angular width is aperture-dependent – the width decreases in inverse proportion to the aperture. Halving the aperture doubles the edge-rind width. As a result, smaller telescopes are generally much more troubled by edge-rind than large telescopes, due to the comparatively wider rind width.