James Henry Worthington was born on 1884 June 17 at Eccles in Lancashire, the eldest son of Henry Hugo Worthington and Amelia Maud Worthington (née Kennedy) of Sale Old Hall, Manchester. The family was a wealthy one with James’ father Henry being a prosperous manufacturer of ‘card clothing’ and also a Liverpool ship owner. James had two younger brothers, Nigel (born 1885) and Rollo (born 1890). The family moved south around 1890, to the impressive property that was Wycombe Court, at High Wycombe. Henry became a JP for Buckinghamshire following the move and in 1917−1918 he served as the High Sheriff for the county. Wycombe Court was a 26-acre estate and the house (Figure 1) was built in an Oriental style by the previous owner, Charles Forgett, who was a civil servant and a philanthropist with the Bombay Police. 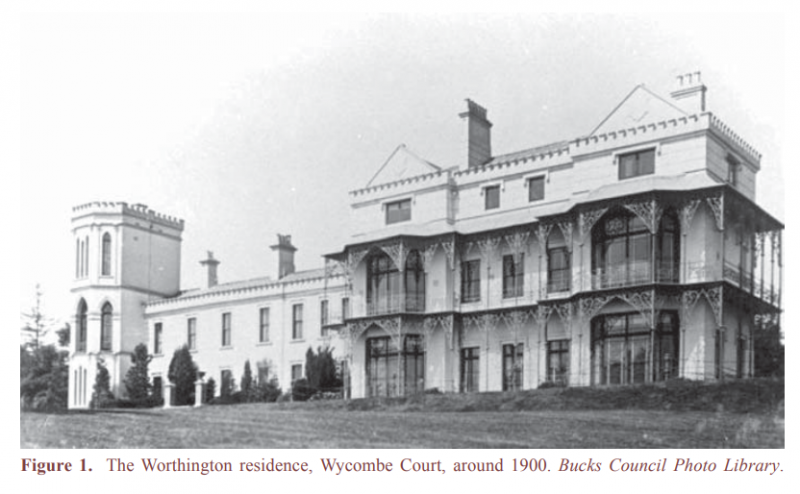 During Worthington’s tenure the house employed eight servants: a lady’s maid, a cook, two parlour maids, three house maids and a kitchen maid. As if this property were not enough for a family of five, Henry Worthington also purchased a large, 12-bedroom, 17th century country retreat in 1898; this was Bindon House, situated at Langford Budville, just north of Wellington in Somerset, which the family owned for the next 11 or 12 years. Henry had attended Clifton and Oriel Colleges at Oxford, graduating with a BA, upgraded to an MA in 1890. James followed in his father’s footsteps, graduating with a BA from Wadham College, Oxford in 1908, with (as was the system at Oxford in those days) an automatic upgrade to MA in 1912.

On obtaining his BA in 1908 the young James Worthington, just 24 years of age, set about pursuing his passion for astronomy immediately with incredible enthusiasm. He was elected to the RAS on March 13 a few months before graduating (citing his student address as the Bindon House family retreat) and he was elected to the BAA seven months later, on 1908 Nov 25 (proposed and seconded by P.M. & S.T. Johnson) citing the main family residence of Wycombe Court as his postgraduation address.

A letter from James, sent from Wycombe Court, was published in the same Journal that his BAA election was announced. It was written on December 5, a mere ten days after he became a member. In the letter James recalled an observation which he had made six years earlier, aged 18, in 1902, using a 2.4-inch (6.1cm) refractor. It was a challenging observation for such a small telescope, at a magnification of just ×70, namely one of an occultation of Ganymede by Europa on 1902 September 3, taking place from 9.25 p.m. until just after 10 p.m. Twenty-first century planetarium packages show the event took place much as he described. James’ letter was prompted by an earlier communication in the October Journal, written by a Mr Beattie. James concluded his letter with ‘The image at the middle of the occultation was somewhat pear-shaped, so I think the passage was not quite central. The diminution of light did not coincide with the middle of the occultation, but followed it by a few minutes. This observation seems to require much explanation, especially the marked loss of light of the satellites.’

From 1909 to 1912 James Worthington, still in his twenties, embarked on an impressive tour of the world’s finest astronomical observatories, managing to throw four solar eclipse expeditions into this itinerary as well! That time period included the much awaited return of comet Halley to the inner Solar System, although, strangely, that Great Comet was rarely mentioned at all in his communications. Even in the 21st century, with air travel being commonplace, a tour of the world’s greatest observatories, including four eclipse trips crammed into a three year period, would be an impressive undertaking. In the steamship era of 1909 to 1912 it was a truly remarkable accomplishment.

There is no evidence that James’ younger brothers shared his passion for astronomy. His brother Nigel… (continued…)