Jupiter and the Juno mission: the amateur’s contribution

NASA’s Juno spacecraft went into orbit around Jupiter on 2016 July 5: the first spacecraft to orbit the giant planet since the Galileo mission terminated in 2003. Juno will start its scientific mission this autumn. In this Journal Jupiter Section Director John H. Rogers summarised the state of the planet’s atmosphere during the 2015–’16 apparition, up to the start of the Juno mission (see PDF). Here he describes a pro-am workshop in Nice in May which set the scene for amateur involvement and ground-based support for Juno from Europe and around the world. 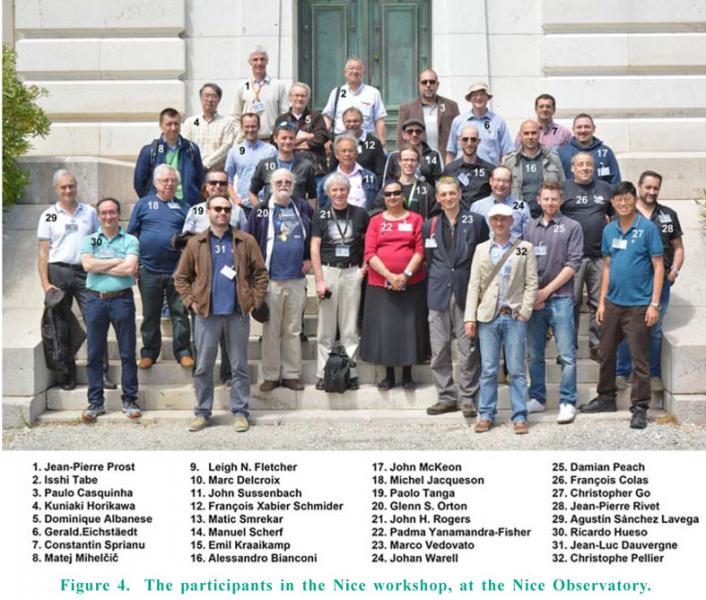 In preparation for the professional–amateur (pro–am) collaboration which is expected during the Juno mission, a workshop on ‘Juno ground-based support from amateurs’ was held in Nice, France, on 2016 May 12-13. It was organised by Dr Ricardo Hueso and Dr Paolo Tanga, and funded by the European Union through the EuroPlanet network. It took place at the Observatoire de la Côte d’Azur, high on a hill with a spectacular view over the city and the sea.
The aims were to inform amateur observers about the Juno mission and the plans for obtaining both professional and amateur observations of Jupiter during this mission; and to enable amateurs to improve their own imaging by sharing best-practice techniques.
This was a valuable opportunity for some of the best-known amateurs from Europe (and several from the USA and the Far East) to meet each other, and to meet professional planetary scientists. The participants were united in enthusiasm that we are all part of a shared enterprise, producing new results, valued by professional scientists as well as ourselves. There were 30 talks, of which only some can be mentioned here.
Dr Glenn Orton (NASA Jet Propulsion Lab), who represents the JunoCam team and has been travelling the world to liaise with amateurs, explained the Juno mission and the JunoCam project [see below], urging all amateurs to participate. Dr Tristan Guillot (Observatoire de la Côte d’Azur) explained one of the main scientific purposes of the Juno mission, the gravitational probing of the planet’s interior. Dr Leigh Fletcher (University of Leicester) showed how large ground-based telescopes can now produce spectacular images and spectra of Jupiter’s mid-infrared thermal emissions (and will do so during the Juno mission), contributing to a three-dimensional understanding of the atmosphere. John Rogers described the current state of Jupiter’s atmosphere [see above], pointing out phenomena of possible interest for JunoCam, with hi-res maps provided by amateur imagers and the JUPOS team.
Several leading amateur observers presented aspects of state-of-the-art planetary imaging, including Christopher Go (visiting from the Philippines) and Damian Peach (UK) who described how they produce their top-quality images. Go uses at least six programs sequentially: Firecapture for image capture, Autostakkert!2 for stacking, Registax for wavelets, GoogleNik for sharpening, Photoshop for noise reduction, and finally, WinJUPOS for combining several images by derotation. All this takes four times as long as the imaging session itself. Christophe Pellier (France) gave a masterly review on the use of filters for observing Jupiter.
Currently, amateurs use small(ish) telescopes frequently, mostly in the visible waveband, whereas professionals use large telescopes for short periods, mostly in the infrared. But this gap is being bridged. On the professional side, Dr Agustin Sanchez-Lavega (University of the Basque Country, Spain) described how his group is now accessing medium and large telescopes, including the 2.2 metre telescope at Calar Alto, using ‘PlanetCam’ to take hi-res images from 0.38 to 1.7 microns.
He has also set up a Meade 143 [355mm] SCT at Calar Alto for remote operation. Whereas remote imaging is now well established for deep-sky objects, it has not been optimal for planets up to now, because careful manual control is needed for best results. However, several organisations are now installing suitable systems with telescopes in the one-metre range, which will be available for amateur use. J-P. Rivet and J-P. Prost (France) described one such setup using a pair of 1-metre telescopes owned by the University of Nice. Damian Peach mentioned another being installed near La Silla, Chile; and the Sierra Stars Observatory in California is also installing one. Also, the 1-metre telescope at the Pic du Midi is available for experienced amateurs to use on site, as described by Jean-Luc Dauvergne and Dr Francois Colas.
Among several talks on the software used for creation and analysis of amateur images, Marco Vedovato described the construction of maps and zonal wind profiles in WinJUPOS. Dr Ricardo Hueso (University of the Basque Country) showed how his professional team are likewise using amateur images to extract zonal wind profiles. Johan Warell (Sweden) presented the ‘Voyager 3’ project by Swedish amateurs to create a continuous animation of Jupiter’s winds from amateur images.
The JunoCam data will also require a different kind of processing by amateurs to produce fully aligned and realistic images [see below]. Gerald Eichstädt (Germany) showed how he had done this with the images from Juno’s Earth flyby, to produce many of the images posted by NASA.
Several organisational issues were addressed in a concluding discussion:
1)    Submission of images to databases: At present, observers are asked to submit to three worldwide databases (PVOL, ALPO-Japan, and JunoCam), and there are also some national databases. Several observers suggested that there should be just one global database with direct uploading from the image processing software. In fact, AutoStakkert!2 already has a direct uploading facility. There was no enthusiasm for discontinuing any of the existing databases, but the operators of all of them will continue working to make uploading and sharing as simple as possible.
2)    Software maintenance: Current amateur imaging depends heavily on a few software suites created entirely by individual dedicated amateurs, notably Registax, AutoStakkert!2, and WinJUPOS. It was pointed out that the whole process is vulnerable in case these people were to become unable to maintain them. (Registax is already unsupported.) Emil Kraaikamp said that he is personally committed to maintaining and upgrading AutoStakkert!2 (and Grischa Hahn is doing likewise for WinJUPOS). It was generally recognised that the success of these programs depends on the personal flair, enthusiasm and experience of these individuals, so professional or group support would not be practical even if it were desirable; vulnerability comes with the package.
3)    There is still debate about whether image analysis should be done with north up (the convention used by professionals) or with south up (the historical convention used by amateurs). This was not resolved, but during the Juno mission, the BAA Jupiter Section will be showing north up, for compatability with NASA output.
All the talks are posted at: http://www.ajax. ehu.es/Juno_amateur_workshop/talks/index.html
John H. Rogers, Director, BAA Jupiter Section

The Juno mission and JunoCam 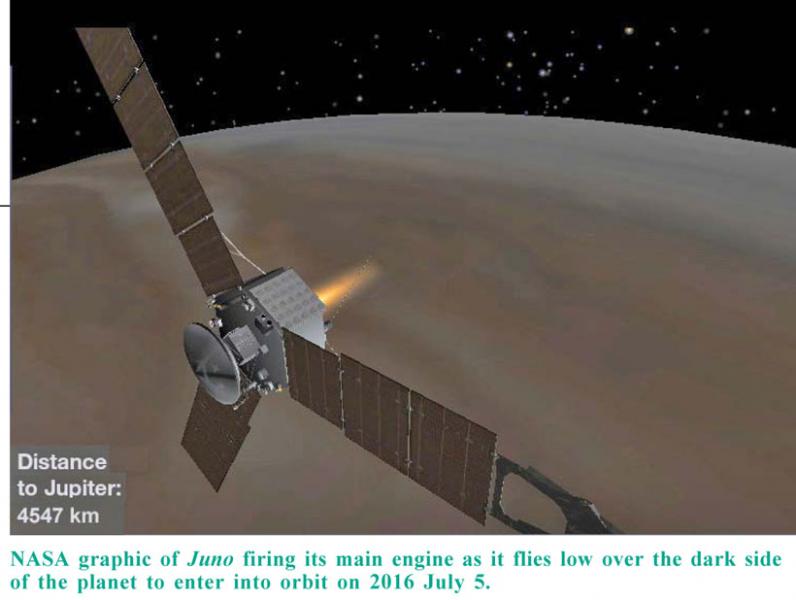 The mission is intended to study the internal constitution of Jupiter – not the visible atmosphere. There are three main goals, to be achieved by a series of very close flybys covering every part of the planet. First, to map the gravitational field in great detail; this will give information on the internal density layering, possibly including detection of a rocky core and of deep-penetrating jetstreams. Second, to map the magnetic field and magnetosphere in detail, along with intensive study of the polar aurorae by ultraviolet and infrared imaging spectrographs. Third, to probe the temperature and pressure of the atmosphere below the visible clouds by means of a microwave radiometer; the results should reveal the abundance of water vapour in the deep atmosphere, and possibly clues to the atmospheric dynamics.
None of these goals requires a camera; but at some point it was realised that politicians and public would expect to see pictures from such an expensive mission, so JunoCam was included, with the official goal of ‘public outreach’. It has a comparatively small data allocation, so only around 10-15 full-colour images will be returned on each perijove. Some of these will be used to support the main scientific goals, by imaging the polar regions and the microwave radiometer targets; but others will be taken at various points below the spacecraft track as determined by public input.
This will be done through a website set up by NASA’s JunoCam team (Dr Candy Hansen and Dr Glenn Orton & Tom Momary). Amateur imagers are uploading their images of Jupiter to this site; Tom Momary makes a map from these images every two weeks; members of the public (including ourselves) flag up features of interest; and on each orbit, the public will vote on which features should be imaged. The targeting will be determined by the JunoCam team based on these votes and discussion as well as scientific criteria. Meanwhile, amateur images will also provide valuable context for the narrow fields targeted by JunoCam and the microwave radiometer.
The Juno spacecraft is spinning (unlike spacecraft such as Voyager or Galileo), so the JunoCam ‘images’ will be assembled from scans taken as the spacecraft spins twice a minute – a technique not seen since the Pioneer 10 and 11 flybys of Jupiter in 1973 and 1974. Thus, the raw images to be released by NASA will consist of 3-colour strips, and amateurs will be invited to process them further, de-rotating and combining them to make more realistic images.
On July 5 (July 4 in the USA), Juno came in over Jupiter’s north pole and performed a 35-minute main engine burn at closest approach, passing only 4547km above the cloud-tops. The burn took place perfectly, and Juno is now in its first orbit. All orbits will be highly elliptical and polar, so the key event on each orbit will be the perijove (closest approach to Jupiter). The spacecraft is currently performing several ‘engineering orbits’, during which the orbital period will be shortened and the instruments checked out; these perijoves are on 2016 Aug 27 (just 4147km above the cloud-tops), Oct 19, and Nov 2. The first normally operational perijove will be on 2016 Nov 16; this will also be the first one for which the public will be able to vote on targets for JunoCam. From then onwards, perijoves will occur every two weeks, at altitudes around 4300km until 2017 March, after which the altitude gradually increases. (There will be no satellite flybys.)
The timing is not ideal for ground-based observers, as Jupiter is in solar conjunction on 2016 Sep 26, so we will have no hi-res images from Earth until November. By the New Year, hopefully the amateur input will be up to standard. However, JunoCam will probably become degraded by Jupiter’s intense radiation belts over several months, so the quality of the images may not be sustained beyond Spring 2017. Nevertheless, the main mission continues until 2018 Feb 20 (or possibly later), when the spacecraft will be sent on a final plunge into Jupiter’s atmosphere. – JHR

All about the Juno mission is at: https://www.missionjuno.swri.edu/.

For collaboration on JunoCam see: https://www.missionjuno.swri.edu/junocam.