Jupiter and the Juno mission: the latest developments 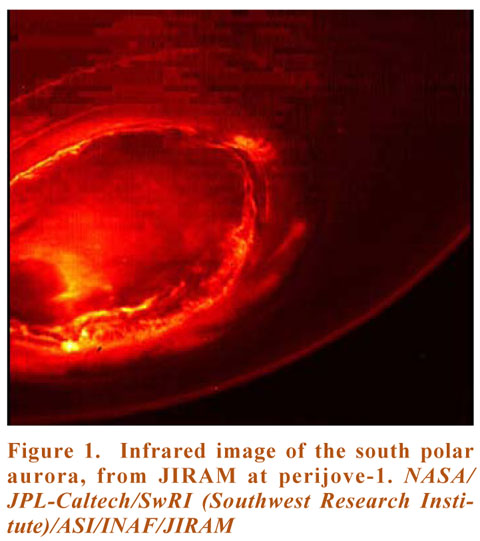 NASA’s Juno spacecraft, which went into orbit around Jupiter on 2016 July 5, had its first operational close approach (‘perijove’) on August 27 to try out all its instruments. Everything was reported to have performed well; as an example, NASA released a spectacular infrared image of the south polar auroral oval from the JIRAM instrument (Figure 1). The ‘public outreach’ camera, JunoCam, took the first images from directly over the poles, revealing the full intricacies of the tangled and turbulent cyclonic disturbances that cover most of the polar regions (Figure 2). 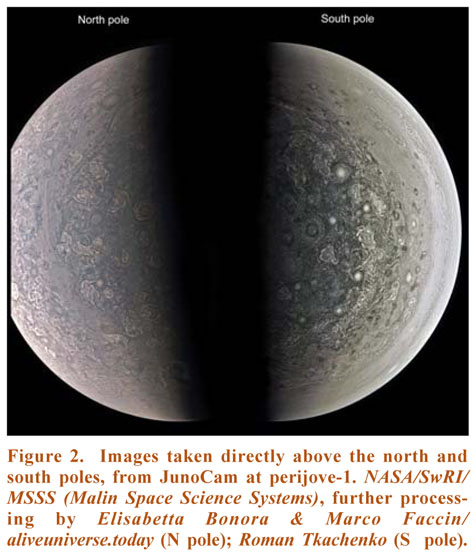 The second perijove, on Oct 19, was more troubled. It was intended to carry out a main engine burn to reduce the orbital period from 53 days to 14 days, so as to commence the planned mission. However, this was cancelled a few days before because two valves were apparently ‘sticky’. Instead, the spacecraft was reprogrammed to perform a full set of scientific observations, as at perijove-1. But this too was lost when, 13 hours before perijove, the spacecraft systems registered some anomaly and went into ‘safe mode’ – i.e. shut everything down.
As if to compensate for these tribulations, while Dr Glenn Orton was taking images from Hawaii coinciding with the perijove on Oct 19, he discovered a spectacular new outbreak on Jupiter’s fastest jet stream…(continued)