This article presents a synopsis of the activity in Jupiter’s North Equatorial Belt (NEB) from 1986–2010, and of the speeds of dark formations on its south edge and bright streaks (‘rifts’) in its interior. In particular I discuss NEB expansion events (NEEs), which took place every 3–5 years during this time, and how the various features of the NEB are involved in them. 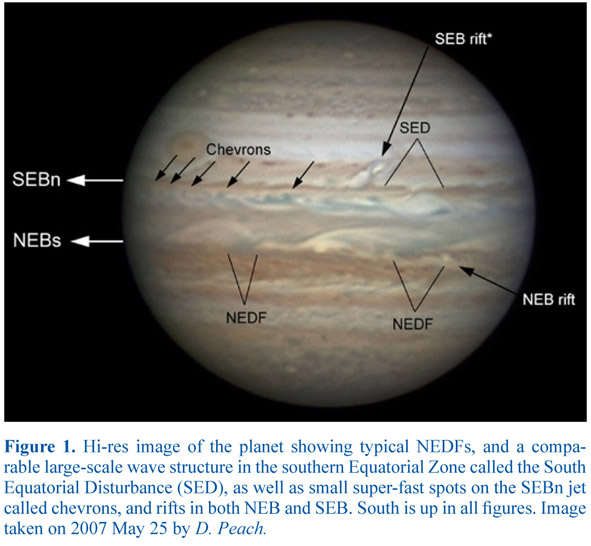 I present evidence that the NEE affects not just the northern edge, but the whole width of the belt. It begins with an outbreak of a bright rift that is more northerly and slower-moving than usual; this is often involved with the first ejection of dark material northwards into the N. Tropical Zone, but typically the rift also expands southwards across the width of the NEB. NEBs dark formations are usually affected, as they are during individual interactions with rifts at other times; they may be disrupted, or intensified, and they usually undergo deceleration. The expansion of the dark NEB to the north occurs concurrently, and is followed by the appearance of new dark ‘barges’ and white ovals flanking the NEBn jet.
The speed of the NEBs dark formations varies with their mean spacing, consistent with the prevailing hypothesis that they are planetary Rossby waves. In most apparitions since 2000 we have also detected smaller, faster features (~120 m/s). I propose that these represent waves of the same type, but with higher frequency, and that their speed is slightly less than the true wind speed at cloud-top level under normal conditions.

The North Equatorial Belt (NEB)
Jupiter’s North Equatorial Belt (NEB) is one of the broadest and darkest belts on the planet. It is almost always a scene of notable weather formations and activity (Figures 1 & 2). Nominally bounded by the retrograde jet at 17°N on its northern edge (NEBn), and the very fast prograde jet at 7°N on its southern edge (NEBs), the visibly dark belt does not always respect these limits (note that Planetographic Latitudes are used throughout this paper). There is a continuous gradient of wind speed across the NEB – as shown by zonal wind profiles (ZWPs) from spacecraft – from the NEBs jet on the south edge (close to System I), to the North Tropical Current which governs the barges and AWOs on the north edge (close to System II). This gradient is demonstrated in Figure 3. The northern edge usually shows irregularities, which often include prominent oval circulations: dark brown cyclonic ovals (‘barges’) at 15–16°N, anticyclonic white ovals (AWOs) at 18–20°N; and sometimes anticyclonic dark spots (ADSs) at ~19°N which may be grey, brown or reddish. The latitudes of barges and AWOs vary slightly according to their drift rate, but do not depend on whether they are surrounded by dark ‘belt’ or bright ‘zone’ material.
Within the belt there are usually white ‘rifts’, i.e., oblique, turbulent streaks which are cyclonic convective regions. They are often initiated or renewed by the appearance of brilliant white spots, which are thought to be convective plumes arising by moist convection from the deep water-cloud layer. These are almost certainly thunderstorms, as observed in the NEB rifted region by Voyager and Galileo. The latter spacecraft also observed them in the SEB, and they were detected in similar cyclonic turbulent regions elsewhere in the planet by Voyager and Cassini. The bright spots spread out obliquely as they are sheared by the wind gradient. They often expand into – or form within – more extensive rifted regions, which can last for months or even years.
On the NEB southern edge, there are large dark formations which are among the most conspicuous features on the planet, as described below. They are often associated with bright white features which are called ‘plumes’, since their appearance is suggestive of cloud streaming vertically and/or horizontally… (continued)