Paper II described the extreme changes in Jupiter’s North Equatorial Belt (NEB) which took place in 2011–’12: quiescence, narrowing and fading of the belt, along with acceleration of the prograde NEBs jet to super-fast speed. Here we describe how this anomalous state was terminated in 2012, in a rapid and vigorous disturbance known as an NEB Revival – the first in living memory. At the same time, the North Temperate Belt (NTB) had entered a similar preparatory state, which was terminated by an NTB Revival initiated by a typical outbreak on the super-fast NTBs jet. The two concurrent Revivals appeared to constitute a ‘great northern upheaval’ extending from the equator to ~38°N, which may have been the first such event ever recorded. We compare this dual event with the more typical ‘global upheavals’, which consist of near-simultaneous Revivals of the NTB and the South Equatorial Belt (SEB), along with equatorial coloration. We also discuss the current understanding of global upheavals. 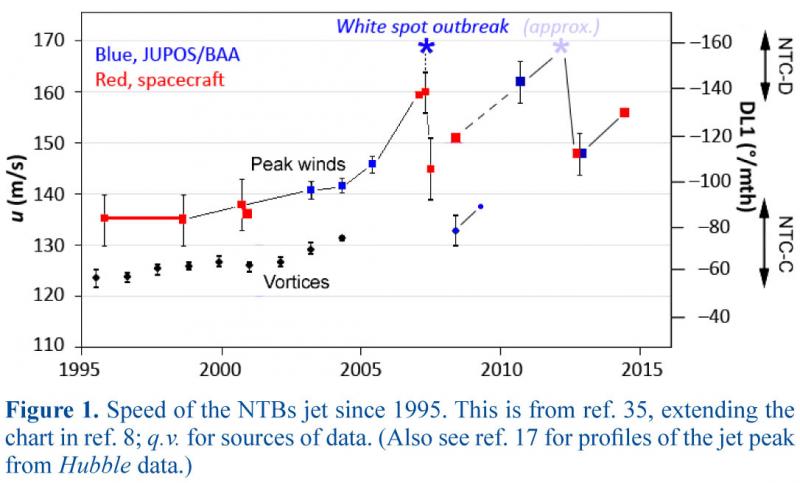 The very fast jet on the NEB south edge (NEBs) was described in Papers I & II. The jet on the NTB south edge (NTBs) is at least as fast, and was undergoing changes in apparent speed which would come to a head in the NTB Revival at the same time as the NEB Revival in spring, 2012. Historically this jet was only observable when there were distinct outbreaks of spots on it, but with spacecraft data – and with very-hi-res amateur imaging since 2003 – it has been possible to measure the wind speed even when there was no outbreak occurring.

This jet has two very different states (Figure 1). In the ‘fast’ state, which held from 1991–2005 and in several earlier outbreaks of dark spots, it carries vortices at DL1~ –60°/mth (u~ 125m/s, called the North Temperate Current C or NTC-C), and the peak wind speed of the jet at cloud-top level is only ~10m/s faster. In the ‘super-fast’ state, which held from 1970–’90 and again from 2007 onwards, it undergoes spectacular outbreaks initiated by one or more brilliant white plumes at DL1~ –160°/mth (u~ 170m/s, called the North Temperate Current D or NTC-D). In such an outbreak chaotic dark spots appear following the super-fast plumes, leading to the development of a vivid orange NTB(S), and usually to the revival of the whole NTB. These outbreaks occurred every 5 years from 1970–’90 (assuming one during solar conjunction in 1985); the only previous comparable outbreak had been recorded in 1880 and they resumed in 2007. These outbreaks have been described in detail for 1975, 1990, & 2007. Each proceeded in the same way, as summarised elsewhere.

Usually such outbreaks occur when the NTB has faded and lead to revival of the dark belt, so they are sometimes called ‘NTB Revivals’. This is not always accurate: for example the NTB was not faint prior to the 1975 event, whereas it sometimes revived without a jet outbreak in previous decades. Nevertheless, the term has suited the phenomenon in recent decades, and is also appropriate as it resonates with the names of comparably grand Revivals of the SEB and NEB. As we shall discuss below, these three types of Revival have much more in common than their diverse appearances suggest…. (continued)