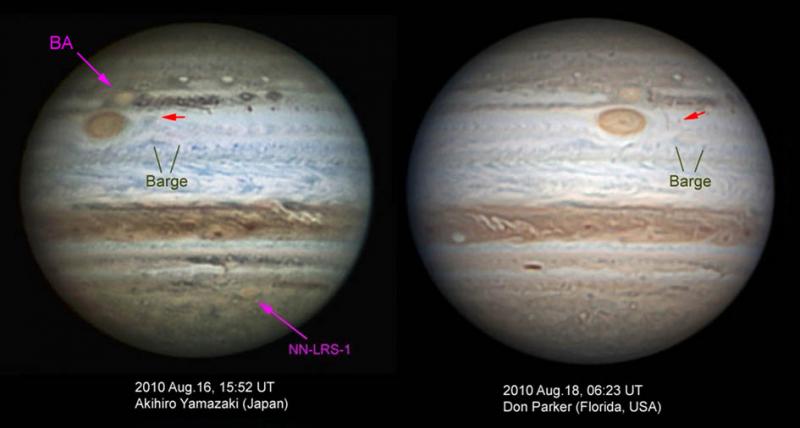 Cycles of fading and revival of the South Equatorial Belt (SEB) are the most spectacular large-scale events that occur on Jupiter.  The most recent started in 2009, when the SEB suddenly ceased its convective activity and began to fade. Modern amateur images, combined with measurements by the JUPOS team, have revealed several new insights into the process.
The following phenomena were observed in this SEB Fade and in some or all previous ones: (1) Fading began within a few months after convective activity ceased. (2) As soon as the convective activity stopped, a series of dark cyclonic ovals (‘barges’) appeared in the SEB, suggesting reconfiguration of the retrograding jet. (3) The Great Red Spot (GRS) became isolated and increasingly red. (4) The GRS decelerated (i.e. increased westward drift). (5) As the SEB faded, a bright plume erupted intermittently to high-altitude on the north edge of the GRS, and induced a blue-grey streak preceding it. (6) A chain of faint spots developed all along the SEBs, constituting a wave-train with a drift rate less than full retrograding jet speed. (7) There was an outbreak of spots on the STBn jet. Some of these recurrent phenomena are not merely aspects of quiescence and increased cloud cover, but distinctive processes, indicating climatic conditions unique to the SEB Fade.

Introduction
Among the large-scale climatic upheavals that from time to time affect various belts on Jupiter, the best known and most impressive are the cycles of fading and revival of the South Equatorial Belt (SEB). During the Fade, the normally dark SEB becomes calm and gradually lighter in colour, sometimes becoming completely white. Then the Revival begins at a single point from which vigorous disturbance spreads around the planet over several months. There were 15 such cycles in the 20th century, and so far two in the 21st. These cycles occur with unpredictable timing, sometimes with a periodicity of ~3 years but sometimes at much longer and irregular intervals.

The known characteristics of SEB Fades have been summarised as follows (see pp.169-170 of Ref. 2). The fading occurs over a matter of months, and persists for between one and three years before the onset of the Revival. If the SEB is not already double, the fading begins in the middle latitudes of the belt, but soon the southern component virtually disappears; this can occur within 2-3 months, or over a much longer period. In the era with 3-year periodicity, some fadings were not completed. The N component may remain as a dark though quite narrow belt, or it may fade also. The fading of the belt may not be entirely uniform; distinct, very dark streaks of SEB(S) may persist for several months.
The faded SEB can show a variety of pale colours. Bluish tint is common in the residual SEB(N), and occasionally in the faded SEB overall. Conversely, reddish colour is only seen in the faded belt when the colouration of the previous SEB Revival lingers during the next fading, or when the SEB(N) is involved with strong colouration in the EZ (though these conditions did not exist in 2009-’10). Sometimes there is a distinct bluish or grey triangle on the south edge of SEB(N) north-preceding (Np) the GRS. Bluish colour is thus common. As this colour is rarely seen at other times, it is evident that the fading is not merely a covering of the belt with white clouds.

During the fading of the SEB, the GRS intensifies, both in darkness and (often) in colour, to become a prominent dark reddish oval surrounded by the broad white zone (12 of 14 fades). Sometimes, rather faint bluish shadings develop around it… (continued)