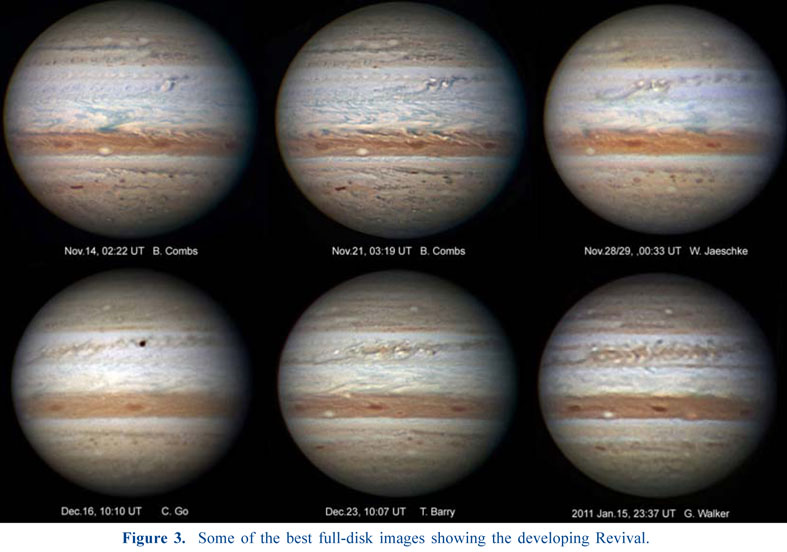 A Revival of Jupiter’s South Equatorial Belt (SEB) is an organised disturbance on a grand scale. It starts with a single vigorous outbreak, from which energetic storms and disturbances spread around the planet in the different zonal currents. The Revival that began in 2010 was better observed than any before it. The observations largely validate the historical descriptions of these events: the major features portrayed therein, albeit at lower resolution, are indeed the large structural features described here. Our major conclusions about the 2010 SEB Revival are as follows, and we show that most of them may be typical of SEB Revivals. 1) The Revival started with a bright white plume. 2) The initial plume erupted in a pre-existing cyclonic oval (‘barge’). Subsequent white plumes continued to appear on the track of this barge, which was the location of the sub-surface source of the whole Revival. 3) These plumes were extremely bright in the methane absorption band, i.e. thrusting up to very high altitudes, especially when new. 4) Brilliant, methane-bright plumes also appeared along the leading edge of the central branch. Altogether, seven plumes appeared at the source and at least six along the leading edge. 5) The central branch of the outbreak was composed of large convective cells, each initiated by a bright plume, which only occupied a part of each cell, while a very dark streak defined its western edge. 6) The southern branch began with darkening and sudden acceleration of pre-existing faint spots in a slowly retrograding wave-train. 7) Subsequent darker spots in the southern branch were complex structures, not coherent vortices. 8) Dark spots in the southern branch had typical SEBs jetstream speeds but were unusually far south. This suggests either a complex vertical structure of the SEBs jet, or a real acceleration westwards on the south flank of the jet. 9) Part of the revived SEB became overlaid with orange, methane-bright haze.

Introduction
The SEB Revival is the grandest meteorological phenomenon to be seen on Jupiter, but only occurs at irregular intervals. Since the modern era of high-resolution imaging began, observers and scientists have looked forward to an opportunity to investigate one in detail. The Revival that began in 2010 has been better observed than any before it.

As described in our previous paper, sometimes the usual large-scale convective activity in the SEB ceases, the disturbances on the SEBs jet disappear, and the belt begins to brighten. This is an SEB Fade, and is inevitably terminated by a SEB Revival. The Revival always begins at a single longitude, which becomes a persistent source region, and three ‘branches’ stream out from it in the central, southern, and northern parts of the SEB. The southern and northern branches follow the rapid jets which bound the SEB: the SEBs retrograde jet (westwards) [see Footnote 1], and the SEBn prograde jet (eastwards). The typical pattern has been described from the 14 SEB Revivals from 1919 to 1990, and the following introduction is largely quoted from Rogers (1995), ch. 10.3.

The Revival always begins when a very dark spot or streak appears across the latitudes of the SEB. Often it is associated with a brilliant white spot on its p. side; sometimes the white spot has been recorded a few days before the streak, in the southern half of the SEB (13-17°S). It is possible that the white spot always appears first, but visual observers were less sensitive to bright than to dark features. There is usually no visible precursor at the source longitude, but two Revivals appeared adjacent to small dark slow-moving spots on SEB(S).

From the source point, intense disturbance and/or dark belt material then spreads from the source in three currents or ‘branches’…