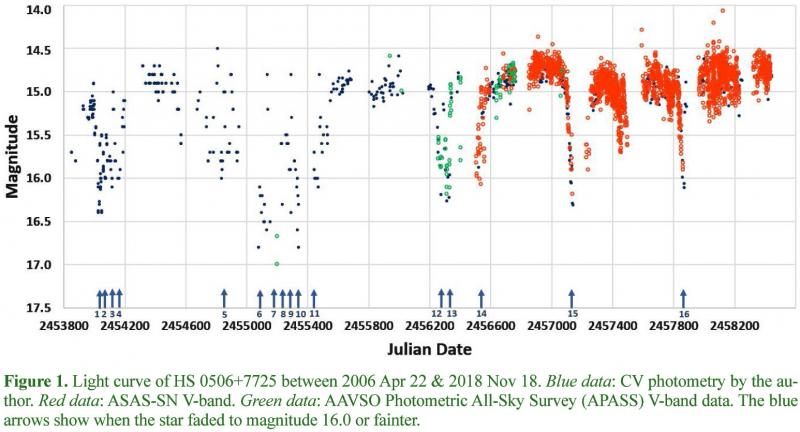 Cataclysmic variables (CVs) are semi-detached binary stars in which a white dwarf primary accretes material from a secondary star via Roche lobe overflow. The secondary is usually a late-type main sequence star. In the absence of a significant white dwarf magnetic field, material from the secondary is processed through an accretion disc before settling on the surface of the primary.

In CVs with high mass transfer rates the accretion disc becomes thermally stable. Such systems are called nova-like stars, because they lack the outbursts characteristic of dwarf novae. Among nova-like stars, there exists a small group known as VY Scl stars, which exhibit pronounced low states in which the system fades by up to five magnitudes at irregular intervals. These low states are due to the temporary reduction or cessation of mass transfer from the secondary star to the white dwarf primary. It is thought that the accretion flow is disrupted when a starspot on the secondary drifts across the point where the accretion stream leaves the star.

HS 0506+7725 was identified as a nova-like CV star during follow-up observations of optically selected CV candidates from the Hamburg Quasar Survey (HQS) by Aungwerojwit et al. (2005). Its orbital period of 212.7 ± 0.2min (0.14771d; 3.5450h) was determined from radial velocity and photometric variability studies.

HS 0506+7725 was characterised by strong Balmer and He emission lines, short-period (~10−20min) optical flickering, and weak X-ray emission in the ROSAT All Sky Survey. The relatively narrow emission lines and the low amplitude of the radial velocity suggested a low inclination. The detection of a deep low state (B~18.3) identified HS 0506+7725 as a member of the VY Scl subclass.

In 2006, Prof Boris Gänsicke (University of Warwick), whose team had characterised many of the HQS CVs including HS 0506+7725, suggested that the author might like to carry out long-term photometric monitoring of the star. The results of this 12-year study are presented here.