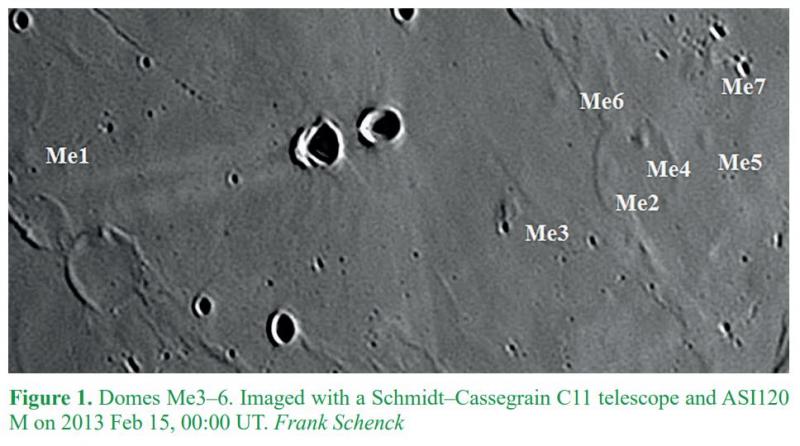 In a previous paper,1 Lena et al. (2017) have described three domes in Mare Fecunditatis, termed Messier 1–2 (Me1 and Me2) and Goclenius 1 (Go1), as well as their geological setting. In this paper we examine the morphometric characteristics of a further five domes, termed Messier 3–7 (Me3–7) and three lunar cones (Cones 1–3). A telescopic image of these volcanic constructs, obtained with a CCD camera, is shown in Figure 1. Associated topographic profiles and 3-D reconstructions of each examined feature were extracted from the LOLA DEM and GLD100 datasets using the QuickMap Lunar Reconnaissance Orbiter (LRO) global basemap (target.lroc.asu.edu/da/qmap.html). The 3-D reconstructions and profiles of the examined domes are shown in Figures 3 & 4.

Spectral analyses are included on the calibrated and normalised Clementine ultraviolet/visible (UVVIS) reflectance data,2 as well as data from Chandrayaan-1’s Moon Mineralogy Mapper (M3) and the LRO Diviner Lunar Radiometer Experiment which is used to characterise the Christiansen Feature (CF), directly sensitive to silicate mineralogy and bulk SiO2 content.3 The domes described in the current study are characterised by medium-Ti content basalts of about 4–6wt% TiO2. Spectral data display a typical high-Ca pyroxene signature of basaltic composition (Figure 5). The morphometric and spectral properties of the examined domes are reported in Tables 1–2.

In Figure 1, the elevation of the structures Me3–7 is very apparent and to the west of Messier crater another lunar dome is detectable, which is termed Me1.

The LRO WAC (wide-angle camera) image M117161873MC (Figure 2) displays the domes termed Me2 and Me4–6. In this image the steeper dome Me4 is prominent, as in the telescopic CCD imagery shown in Figure 1. 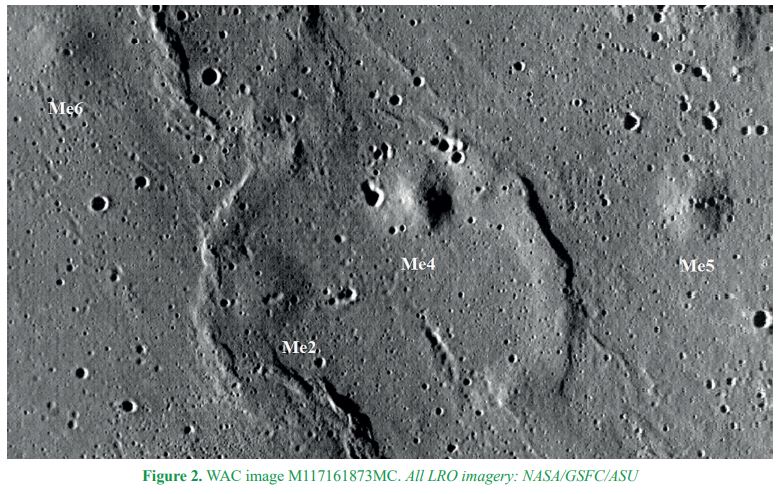 Class A domes are small, shallow and formed by high-TiO2 lavas of low viscosity, erupting at high effusion rates over very short periods of time, resulting in edifices of low volume.

Class B domes consist of lavas of intermediate-to-high viscosity and moderate TiO2 content, erupting at low-to-intermediate effusion rates. If the effusion process continues over a long period of time, steep flank slopes and high volumes may occur (class B1), while short periods of effusion result in shallower edifices of lower volume (class B2).

Class C domes are formed out of low-TiO2 (class C1) or moderate-to-high-TiO2 (class C2) lavas, building up edifices of large diameter but shallow flank slope. These shapes are due to low lava viscosities and high effusion rates.

Class E domes represent the smallest volcanic edifices formed by effusive mechanisms (diameter D < 6km). In analogy to class B the class E domes are subdivided into subclasses E1 and E2, respectively denoting the steep-sided examples with a flank slope larger than 2°, and the shallow edifices of this class.

Class G comprises the highland domes, which have highland-like spectral signatures and high flank slopes of 5–15°, represented by the Gruithuisen and Mairan highland domes.

Class H comprises small domes such as the Marius hills, with D < 6 km assigned to subclass H1. Domes of subclass H2 with D > 6 km and slopes < 5.5° morphometrically resemble the steep domes of class B1, but their irregular shapes indicate a formation during several effusive episodes. Domes of subclass H3 have diameters comparable to those of monogenetic class B1 domes, but their flank slopes are all steeper than 5.5°.

An interesting observation in the area under study is of the presence of ring moat domes (RMDs). These structures have been identified as widespread on the maria and are thought to be volcanic in nature,10,11 possibly involving the extrusion of magmatic foam. They can be interpreted as tumuli or squeeze-ups. Tumuli are humps a few metres high on a lava surface and are formed when the pressure variations within fluid lava are concentrated at one point, pushing the surface up. If the curvature becomes too extreme the crest of the tumulus can fracture. The squeeze-ups are similar to tumuli, but the crust is broken and viscous lava has forced a passage similar to the intrusion of a dike.

A number of RMDs associated with the Messier domes and surrounding mare surface were identified. Two fairly typical RMDs within the study area were analysed and found to have a spectral signature of a basaltic composition (Figure 9), with two absorption bands at 970nm and 2,200nm. Based on a similar PCA to that applied to domes in general,6 we have identified a new cluster of these small structures and introduce another new class into the classification scheme, termed class L (Figure 6).

We interpret Me3 as probably originating as a result of a magmatic intrusion. Intrusions are subsurface concentrations of magma that have locally uplifted the mare but do not erupt; a mechanism reported for terrestrial laccoliths has been described in detail by Pollard & Fletcher (2005).12 The dome Me3 matches the properties derived for a putative intrusive dome belonging to group In2.4,6

Morphologically, Me3 can be divided into a northern circular structure approximately 6.5km in diameter and a more irregular southern one (Figure 8).

The northern unit appears to be a ghost crater which has been modified by subsurface magmatic intrusion; this is contained within the crater rim and has erupted at the surface to produce Cones 1 & 2. This unit has a number of other volcanic features associated with it as well as the cones.

To the east, a small break-out flow of possibly more viscous lava has either breached the crater rim or exploited a topographic low to flow for about 1km onto the mare surface (Figure 9). The flow is wider (1.5km) than it is long, indicating viscous or relatively cool lava. The source of the flow could be Cones 1 or 2, but an alternative origin could be a line of three apparently rimless pits (~50–70m diameter) running N–S across the ghost crater, as well as a further two similar pits adjacent to the north-eastern rim.