Maria (pronounced ‘Mar-eye-ah’) was born on 1818 August 1 on the island of Nantucket, off the north-east coast of the USA, near Cape Cod (Massachusetts). The hardship caused by the War of 1812 between the United States and the British had ended in 1815 and the whaling industry on the island had been booming since the seafarers of Nantucket were no longer in danger of attack. Most of the men in the population of around 7,000 went to sea while the women were accustomed to taking charge of affairs at home.

Maria’s parents, William and Lydia, belonged to the large Quaker community on Nantucket. Their formal religious discipline enshrined a duty to educate both girls and boys and to teach science. Lydia had been a librarian and was a prolific reader. William was an intelligent and enterprising man who had chosen to marry rather than take up a place to study at Harvard College. He did not follow the seafaring life, but instead engaged in a variety of occupations in support of the community as the opportunity arose, including being a teacher for several years. Throughout his life he was passionate about astronomy. According to Maria’s sister Phebe Mitchell Kendall (1896), he gave his nine children the impression that studying astronomy was the most important thing in the world.1

Astronomy was indeed widely regarded as important on Nantucket for practical reasons. Navigation, which was necessarily done by observing celestial objects, was an essential skill in a seafaring community and the chronometers carried by the whaling ships for navigational calculations needed to be kept accurate. The fundamental reference frame for measuring time, the rotation of the Earth, could only be tracked by systematically observing the positions of stars. At the peak of the whaling industry in the 1840s, William Mitchell became the ‘rater’ of all the chronometers for the entire fleet of over 90 ships, which entailed astronomical observing whenever it was clear. In later life, Maria told Julia Ward Howe (1884) in an interview, ‘In Nantucket people quite generally are in the habit of observing the heavens, and a sextant will be found in almost every house.’2

So, as a young girl, Maria learned how to use a sextant and make timings with a chronometer. In 1831, a central annular eclipse of the Sun was visible from Nantucket. The Mitchell household made preparations to observe it in order to determine the longitude of the house. A window was taken out of the parlour and a telescope mounted in front of the space created. The eclipse was timed by the 12-year-old Maria and noted by William. We know this because Maria later annotated William’s observing notebook to explain her role.

Maria also learned at home, in her back yard, how to make telescopic observations. The Mitchells’ first telescope was described by Phebe as a Herschelian reflector ‘of great simplicity’, but William later bought a 7cm (2¾-inch) refractor by Dolland, which Maria used throughout her life for sky-sweeping.

Up to the age of 16, Maria attended school, where her exceptional talent for mathematics became apparent. Her father was among her first teachers. After leaving school, she became a teacher herself for two years but was then recruited as the librarian of the Nantucket Atheneum. Since the Atheneum was only open to the public in the afternoons, Maria had time to herself to make use of the library. She studied the English translation of Laplace’s Mécanique Céleste by the mathematician Nathaniel Bowditch, who was a friend of her father, and Gauss’s Theoria Motus Corporum Coelestium, which she read in the original Latin. 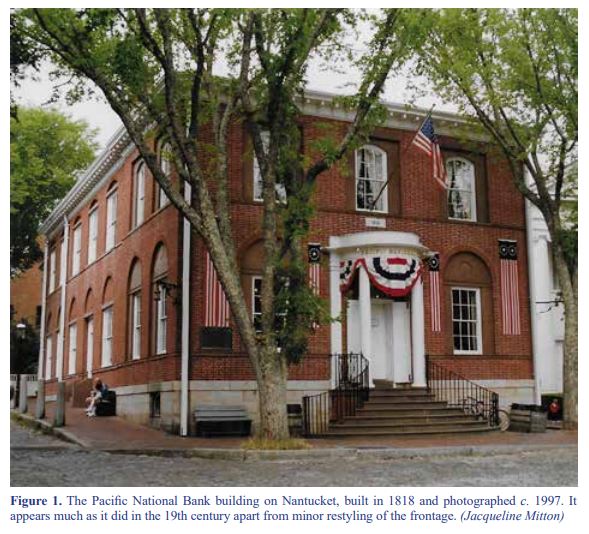 In 1837, William was appointed cashier at the Pacific National Bank and the family moved into spacious living quarters over the bank. On the roof was a wide boardwalk, a common feature of Nantucket architecture. William constructed a small observatory on the boardwalk to house some instruments, while other pieces of equipment were set up in the back yard. Maria’s brother Henry, who became a leading hydrographer and was one of the founders of the National Geographic Society, recalled that the Mitchells were loaned a variety of instruments by the State, by West Point Academy and by the Coast Survey, including transit instruments and an equatorial telescope.3 Maria habitually used the Dolland refractor on the boardwalk for regular sky-sweeping. According to Henry Mitchell (1890), the routine observations carried out by William and Maria included Moon culminations and occultations, transit times of stars across the prime vertical, and the positions of the planets, sunspots, meteors and aurorae. Later, using Smyth’s Celestial Cycle as their reference work,4 they added nebulae and double stars to the programme.

By her early twenties, trained by her father and with several years of practical experience, Maria was solidly grounded in making visual astronomical observations. To those skills she had added by personal study a mastery of mathematical celestial mechanics. Furthermore, she had been introduced by her father to a network of the most eminent men (and they were all men) working in astronomy, mathematics, surveying and instrument-making in the north-eastern United States.

One of William Mitchell’s closest associates was William Cranch Bond (1789–1859). Bond was an expert clockmaker and keen amateur astronomer from near Boston. He was persuaded in 1839 to take his skills and his own instruments to Harvard College where he acted as the unpaid ‘astronomical observer to the university’. Together with the mathematician and astronomer Elias Loomis (1811–1889), Bond helped William set up his Nantucket observatory. He was ultimately appointed as the first Director of the Harvard College Observatory in 1846. His son, George Philips Bond, was also an astronomer and succeeded him as Director. The close links between the Mitchells and the Bonds proved fruitful for both. In their history of Harvard College Observatory, Bessie Jones and Lyle Boyd (1971) declare, ‘It is fair to say that she [Maria Mitchell] owed to her close association with the Bonds not only the beginning of her career, but its later distinction.’5 But it may equally be said that Harvard profited from its association with Maria. As social scientist Renée Bergland (2008) put it, ‘It took Maria Mitchell’s discovery to bring American astronomy onto the world stage.’6