Maurice Victor Gavin was born in Parsons Green, Fulham, London on 1934 October 18, the youngest of six children of Emmeline and Thomas Gavin. The Second World War began just before Maurice started his schooling. Although the war disrupted his education he was able to attend a local school. He was always inquisitive, and attentive about the world around him…. 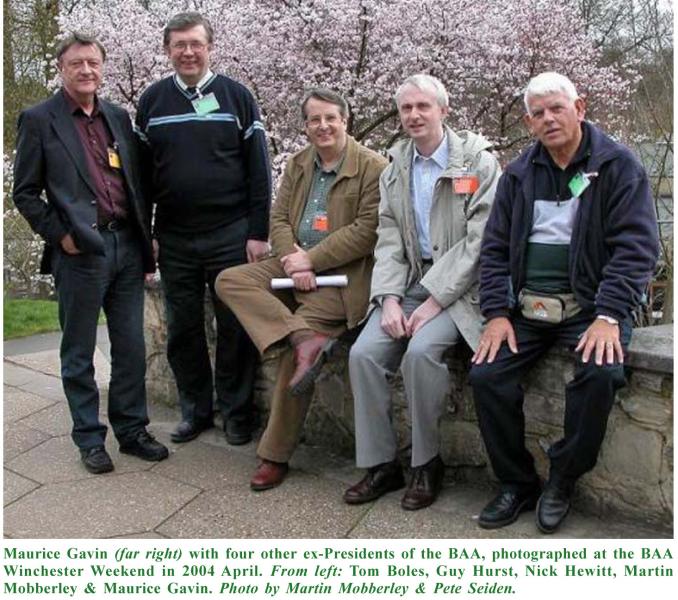 He gave many talks to members of the Association and astronomical societies over the years, describing the techniques and equipment that he was using to encourage others to follow suit. He attended many meetings of the Association and could regularly be seen in deep discussion with members offering help and advice.
Maurice was awarded the Merlin Medal and Gift by the Association in 2009 in recognition of ‘a notable contribution to the advancement of astronomy’, citing in particular that he was ‘always the first to encourage and motivate others to develop their skills by demonstrating and communicating his work and achievements’.
Maurice was also a member of TA (The Astronomer). He submitted many images to the magazine, and gave several talks at TA AGMs ranging from observing the planets, deep sky, spectroscopy, computing and imaging.
In the early 1970s Maurice converted the garage at the bottom of his garden into an observatory and installed a 450mm Newtonian telescope. The optics he obtained from America but the rest of the telescope and the mount were home built. The Guildford to Waterloo railway passed not far from the observatory which caused some vibration when trains went past, so Maurice pinned a copy of the train timetable to the wall of the building so he knew when not to take images. The observatory was clearly visible to those travelling past in the trains and over the years became a recognised landmark on the line.
Computing was another great interest for Maurice. In the early 1980s he wrote a book (ZX Spectrum Astronomy) describing how amateurs could benefit from using emerging computer technology. This encouraged many to try it for themselves. Also in the early 1980s Maurice set up a publication for amateurs called Apex (Astro-computing Program Exchange), containing computer programs provided by himself and other contributors. This had a circulation of about 300. During the time that it was published it provided an insight into using this new technology for astronomical means and encouraged amateurs to start using computers.
In later years Maurice was active on various internet forums where he was known as Nytecam. Over the years he always embraced developing technology and encouraged others to do the same. To this end in the 1990s he constructed a smaller observatory adjacent to the first and installed a computer-controlled 300mm SCT. When electronic imaging came along Maurice was keen to experiment with various cameras and equipment and by doing so motivated and encouraged others to follow suit.
At the time Maurice was also one of only a few amateurs using and developing techniques in spectroscopy. He was the first amateur to obtain a spectrum of supernova 1966bu in M96, and in 1998 he obtained a spectrum of Wolf-Rayet star HD1921163 in Cygnus. He obtained images and spectra of several quasars including Q1226+23 (2C273) and Q0014+813, demonstrating that the spectral lines were highly redshifted. In 2011 he discovered an extragalactic supernova, 2011az in IC3862, one of only a very few British amateurs to have done so.
Maurice Gavin was a man who showed infinite patience with newcomers, giving help and encouragement, and inspiring many others to follow in his footsteps. He was a good public speaker and liked to present to his peers at astronomical events and meetings, sharing knowledge and enthusiasm for deep sky observing, spectroscopy and imaging.
Maurice made a highly significant contribution to the field of amateur astronomy and will be greatly missed by all who knew him.