Me and my arrow 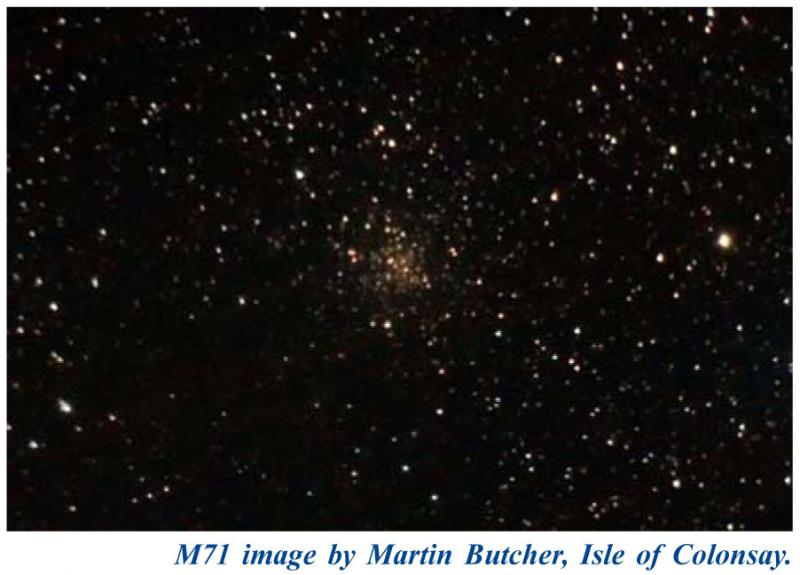 The constellation Sagitta is one of the smallest by area (third smallest in fact), but has a wealth of attractions for the deep sky observer. Sagitta, the arrow, is a constellation that does really look a bit like its name – nestled between Vulpecula, Delphinus and Aquila.
There is just the one Messier object, M71, which is rather under-observed in the Deep Sky Section archives. M71 seems to be a rather strange object – some list it as an open cluster and some as a globular cluster. It is generally recognised now as a globular, but it does have interesting properties. For example there are no RR Lyrae stars in the cluster – these were once known as ‘cluster variables’ because of their ubiquity in globulars. The absence of RR Lyrae stars has also made distance measurement difficult (they are used as standard candles in the distance ladder). Modern research places M71 about 12,000 light years distant with a relatively young age of 9 to 10 billion years. While many globular clusters are much older, this leads to interesting questions about how M71 might have been created, and how, in general, globular clusters come into being.
It is a struggle to find images of any of the other deep sky objects in Sagitta – but there are quite a few interesting things here. 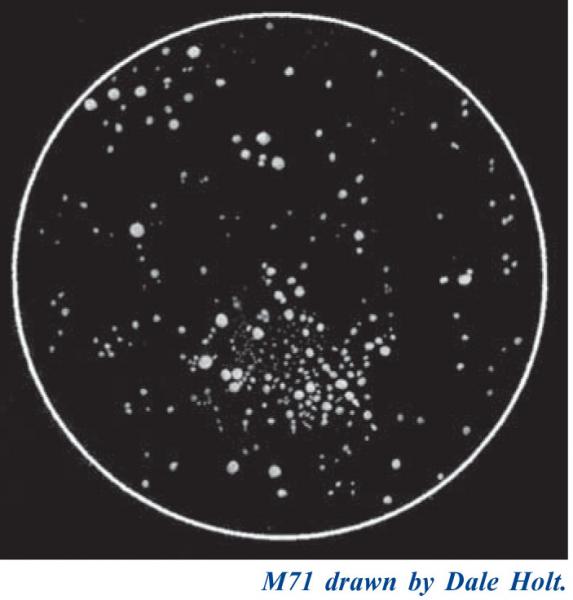 Harvard 20 (H20) is an open cluster of about 30 stars. Although there are a couple of ‘bright’ magnitude 9 stars the majority are mag 12 or fainter. Probably at least a 15cm (6-inch) aperture telescope will be needed to see this cluster, which has a triangular appearance.
Sagitta, being located in the rich star fields of the Milky Way, is a good hunting ground for planetary nebulae, and there are five to be found here.
NGC 6886 is the easiest on view in the constellation, though still pretty tiny at around 9 arcseconds in diameter and mag 11. In large scopes it might show as a blue/greenish star, but a substantial magnification (´400) might be needed to start to show that it is not a star. It has a 16th magnitude central star which is pretty difficult.
NGC 6879 is also mag 11 but only 5 arcseconds, and similarly IC 4997 is mag 11 and 2 arcseconds. It seems unlikely these will be resolved visually, but use of an OIII filter or a prism might reveal their ‘planetary’ nature.
Pushing the limits of visibility are Abell 59 and Abell 63 – both are listed as mag 16 but are quite large (compared to the NGC PNes here) making them difficult with even a large telescope, 400mm (16 inches) aperture or more. However being larger on the sky should make them more accessible to imagers.
A real challenge for imagers will be the nebula around the star FG Sagittae. In its dying days this Wolf-Rayet is throwing off its outer atmosphere as a planetary nebula forms. The nebula is rather small and faint in comparison to the star – but a project that imagers might like to tackle. Let me know how you get on.
Double star observers will like to look out for Zeta Sagittae and Theta Sagittae. Zeta has 5th and 9th mag components separated by about 8 arcseconds, while Theta is made up of 6th and 8th mag stars separated by about 12 arcseconds.
So a great deal of delights in this less visited place – please do spend a little time there this autumn.