Meeting of the Comet Section

The Northampton Natural History Society hosted the first Comet Section meeting for several years in the Humfrey Rooms, Northampton on 2013 May 18. The meeting was arranged by Denis Buczynski and Nick James and our hosts laid on plenty of tea and biscuits (including home-made shortbread stars) to aid discussion during the breaks.

Denis opened proceedings by paying tribute to Roy Panther, discoverer of comet 1980 Y2, who joined us for the morning session. Jonathan Shanklin then introduced the work of the Section, and explained that one of its remits is to produce scientifically useful observations. In most cases, it is up to the observer to reduce their own observations and submit these in the correct format but help is available with this process.

Denis then focused on wide field imaging, which is used to put a comet in a scenic setting, or to follow what are often rapidly moving features in the ion tail. Wide field images can also provide better total magnitude estimates, as does using the lowest power for visual observations. Guy Hurst elaborated on visual observation, and stressed that a simple written description was still a valuable contribution as this often captured information that was lost in numeric codes. 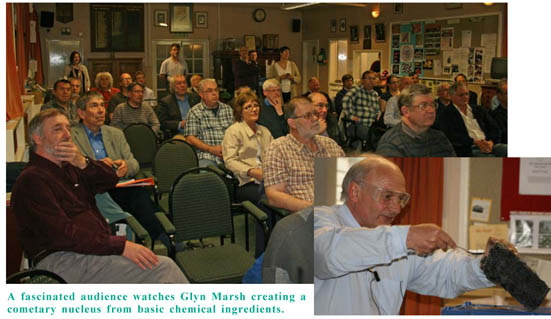 Glyn Marsh concluded the morning session with a spectacular demonstration of comet cookery (watch the video on the BAA website at the address given below!).

Robin Leadbeater began the afternoon by showing that taking low resolution spectra of comets could be accomplished with relatively simple equipment, but that better resolution required more expensive instruments. These observations help to classify comets, and he showed that 2011 L4 and 2012 F6 had very different spectra. With all the media excitement about 2012 S1 (ISON) it is important to understand comet lightcurves and Nick James explained the theory and practice of obtaining good photometry. Roger Dymock then showed how to extract visual equivalent magnitudes from electronic images. This would allow the extension of visual lightcurves to much fainter comets.

A full write-up of the meeting will appear in the next edition of the Section newsletter, and audio records and slides for each talk are available on the BAA website at www.britastro.org/cometmeet2013. In about 12 months time I hope to organise a workshop style meeting, where members can work through image analysis techniques with mentors on hand.