Meeting of the Radio Astronomy Group and Meteor Section, 2015 October 31 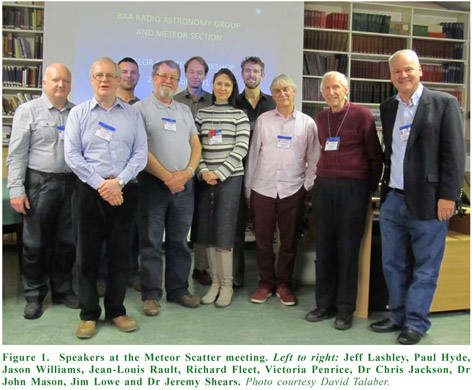 This was a workshop event covering the use of radio backscatter techniques in the observation of meteors. The event was well attended with all fifty tickets sold in advance of the day.
Dr John Mason, Meteor Section Director, opened proceedings by recounting the work of Bernard Lovell at Jodrell Bank in 1946. Lovell suspected that meteors reflected radar signals and had enlisted the help of the BAA and Dr Mason’s early predecessor, J. P. Manning Prentice. As well as educating Lovell in meteor science, Prentice would shout out visual observations whilst Lovell watched the radar screen inside his trailer. Prentice suggested observing the forthcoming Giacobinids and in the early hours of 1946 October 10 the sky above Jodrell Bank exploded with activity, with the oscilloscope screen drowned out by radar returns. Dr Mason was not aware of any BAA event covering radio meteor scatter since that day, making this a truly historic occasion.
Dr Mason concluded by introducing Dr Jeremy Shears, the incoming BAA President, who welcomed the attendees and thanked in particular the committee of the Radio Astronomy Group for organising the event.
The keynote speaker for the workshop was Jean-Louis Rault, head of the Radio Astronomy Commission of the Société Astronomique de France, and of the Radio Commission of the International Meteor Organisation. Jean-Louis described the importance of meteors in studying the make-up of the solar system, in high altitude atmospheric and ionospheric research, and in providing highly-resilient commercial and military communication links. It was also important to understand their consequences for space hardware, from satellites to space stations. He provided examples of meteor observations and the work being done in correlating these by the IMO and Radio Meteor Observing Bulletin.
Radio observations reveal much that we do not understand about the physical processes going on in the plasma created by the meteor, such as the enigmatic ‘corkscrew’ echoes. Other observations suggest that meteors modify the ionosphere, producing changes in the propagation of VLF and HF radio signals. He noted that, over several centuries, there have been many reports of audible effects coincident with the sighting of fireballs, something that seems impossible for an event over 80 km from the observer, raising the question of whether meteors radiate very low frequency (VLF) radio waves.This is a difficult phenomenon to explore as can be seen by the excellent work carried out by Dr David Morgan in his papers on the BAA RAG website.
Finally Jean-Louis noted the potential for Pro-Am collaboration, exemplified by the BRAMS project in Belgium and the FRIPON project in France. The latter aims to identify the likely landing area for meteorites using video cameras to establish trajectories, and then to calculate the orbit of the parent stream using the velocity information gained from radio observations.

Dr Chris Jackson described how he has been using radio astronomy in his work with the Engineering Development Trust, which provides young people with experience in science, technology, engineering and mathematics. Pupils at Ratcliffe College have constructed meteor scatter receivers and used them to collect and analyse data, exercising their abilities in project management, team-working, construction and the presentation of results. He provided a brief introduction to the basics of meteor science before explaining how the GRAVES radar system in France can be used to illuminate the sky so that radio reflections from meteors can be observed. He described the construction of a receiving station, based upon articles published in Sky at Night magazine and the papers produced by Dr David Morgan, all of which are available from the RAG website, before displaying some of the observations, including false detections due to reflections from the Moon and the International Space Station. Chris has also been working with local astronomical societies and the intention is to develop lower-cost receivers to reduce the entry barrier for newcomers.
Paul Hyde’s presentation described the use of the Spectrum Lab application to display radio events and to capture data for further analysis. As with all applications using the Fast Fourier Transform, you have to understand its limitations to avoid being misled by the results. The FFT can introduce artefacts which can be mistaken as meteors by the unwary, and using the wrong settings can result in false readings and the loss of perhaps 25% of meteor events. He showed how multiple ‘instances’ of Spectrum Lab can be run at the same time, allowing a comparison of differing measurement techniques. The speaker provided examples of various phenomena that generate false meteor detections, significantly distorting the true activity profile and making it essential to check logged events against a visual record. It should be possible to develop a system that will enable observers to do this within 10 minutes for a normal day’s activity.
Victoria Penrice then introduced Scatterthon, a software application being developed to help observers both ‘cleanse’ their data to improve accuracy, and then to display the results in various formats to help analyse what’s going on. (continued…)

(Login or click above to see the full article in PDF format).