Mutual phenomena of Jupiter’s moons in 2021

This year, prospects for observing Jupiter from the northern hemisphere are much improved, as the planet is further north than it has been for several years. The planet will climb as far as 11.6°S in June, though sinking back to 13.5°S at opposition on Aug 19/20.

Also this year, the Jupiter system is edge-on to the Sun and Earth (with equinox on May 2), so the Galilean moons sometimes occult and eclipse each other – the ‘mutual phenomena’. Predictions have been posted by the French IMCCE (Institut de Mécanique Céleste et de Calcul des Ephémérides, operated within the Paris Observatory in conjunction with the Bureau des Longitudes and research institutions). They have also initiated an observing campaign. All the information is at bit.ly/2Ok8IfJ, which links to ephemerides at bit.ly/3elYOF4.

It is all in English, although ‘phemus’ is the French shorthand for phénomenes mutuels.

You can search their listing for phemus observable from your location. You can also make visualisations of them using WinJUPOS (Tools > Ephemerides > Graphics).

Unfortunately, only a few are visible from the UK. The table shows the IMCCE predictions for Greenwich, excluding grazing and penumbral events. North European latitudes are disfavoured because of the planet’s still-southerly declination and because most of the events occur before midsummer, so the planet is still low above the horizon before sunrise. Observers further south, of course, will have many more opportunities.

Of the events in the table, one is an occultation and six are eclipses. Note that the last four events have long durations, between 50 and 125 minutes (including penumbral phases). This occurs when slow-moving Ganymede casts its shadow on faster-moving Io or Europa while they are in the approaching or receding part of their orbits. The best eclipse to observe may be the total eclipse of Io on May 29. On Aug 1, Ganymede moves partially in front of Europa for over two hours, but then moves back again due to the tighter curvature of Europa’s orbit. On Aug 8/9, Ganymede’s shadow sweeps slowly across Europa in the evening (when the system has only just risen for the UK), then back again seven hours later.

These are satisfying events to observe visually, and accurate photometric timings of the eclipses can be submitted to the IMCCE to check the accuracy of the orbital elements. Observers for whom Jupiter is at high altitude may also try to obtain resolved videos of the phenomena, as several observers did successfully during the last series six years ago. 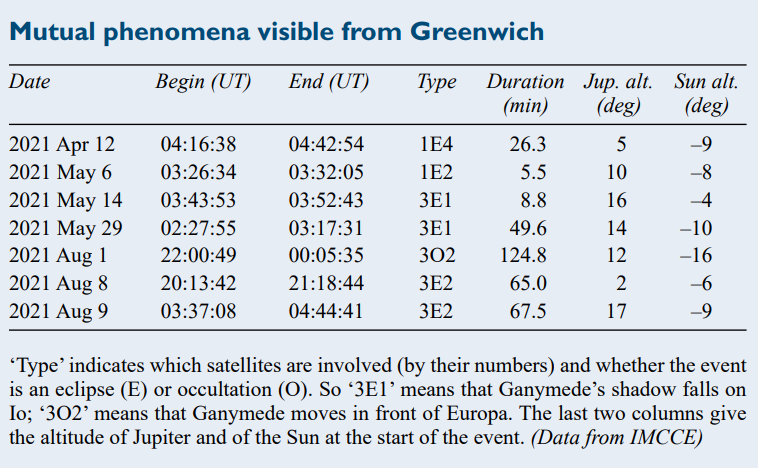