In 1610, the first detection of sunspots by telescope marked the start of the ‘longest scientific experiment still ongoing’.1 Earlier sunspots were occasionally noticed by naked-eye observation; this occurred mainly in China, where they were noted along with other astronomical and meteorological phenomena by royal astronomers – forming ‘one of the longest series of direct physical observations that the world possesses’.2 Similar, but fewer, reports have been found in Korean, Vietnamese and Japanese histories.

Modern researchers have critically examined some 220 East Asian reports in detail, and found about 150 that are probable sunspot observations, the earliest of which is from 165 BCE.3 Sporadic and crude in comparison with modern telescopic data, these reports have nevertheless been valuable in improving our understanding of historic solar activity. For example, one study has identified the ~11-year Schwabe cycle and ~80–90-year Gleissberg cycle in the historic Chinese records, while another has found possible evidence of the ~210-year Suess cycle.4,5 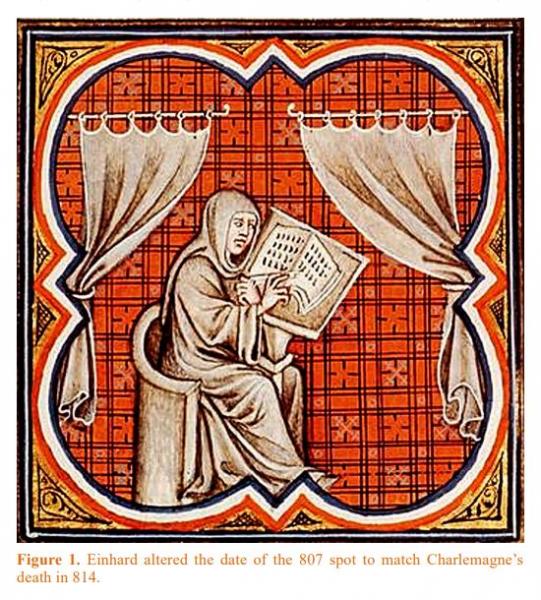 Fewer written accounts originate outside East Asia; those that do are mainly from Europe. However, these ‘western’ records have received much less critical attention than those from East Asia, and many false reports are in circulation. For example in 1978, Wittmann published an analysis of the historic length of the solar cycle,6 in which – along with East Asian data – he listed 25 western reports of naked-eye sunspot observations, of which 13 can be shown to be false. However, nearly all of these were used in his statistical analysis.

Wittman & Xu’s 1987 catalogue improved matters, listing only seven western reports before 1610.7 Nevertheless, as this paper will show, a number of other western reports that are either bogus, or unrelated to sunspots, are still quoted by leading authorities.

A literature search reveals 54 western reports from before 1610 that have been claimed or suggested as naked-eye sunspot observations. Among early examples of such claims are four cases (in the years 535, 626, 807 & 1607) noted by the French astronomer Jérôme Lalande in 1771.8 In 1850 the German polymath Alexander von Humboldt cited these and a further five reports.9 In 1881 the German-Swiss astronomer Hermann Fritz published a short catalogue listing 15 supposed cases of western sunspot observations, which he set alongside more than 40 cases from China.10 By 1900 some 20 western reports were being claimed as sunspot observations. The number continues to grow, the literature containing 13 new claims within the last 25 years. Nevertheless, the majority of the 54 cases have received no critical scrutiny. This paper therefore aims to identify probable pre-telescopic western reports and to document the reasons for questioning or rejecting each of the remaining cases.

This paper looks only at reports before 1610, but naked-eye observations did not halt with the invention of the telescope; indeed reports continue to the present day. Modern studies of observational limits of the (protected) human eye help us to gauge the possible extent of sunspot development associated with ancient observations.11–13 Similarly, studies of the timing of modern naked-eye observations with respect to the ~11-year solar cycle help in estimating the timing of past cycles.14 For an interesting wider perspective on naked-eye sunspot observations, the reader is referred to Vaquero & Vázquez (2009).15

None of the 54 reports are scientific in the modern sense. Very few were written in English, so before any assessment can begin, accurate translations are required. Published translations have been used where available, but have also been checked where possible. Where the translations are the author’s, this is noted.

The paper begins by setting out criteria for assessing the reports and then the scoring and dating system that is used to classify each case. The results are then presented; first, reports that are of probable sunspots; and second, all the others. A brief ‘Discussion’ section follows, in which an apparent match between the timing of western reports and those from East Asia is revealed, and candidate cases of geomagnetic storms are noted. The ‘Conclusions’ section includes a full summary table of all 54 cases in chronological order.