On Jul 1, Dr Richard McKim stepped down as Director of the Mercury & Venus Section and it is with great pleasure that I have taken over from him. My first task as Director is to officially thank Richard for all of his hard work over the last 15 years. I have inherited from him a healthy and vibrant Section, with all recent observations of Mercury and Venus written up in a number of reports published in the Journal.

It is a great honour for me to take on the Directorship, for a number of reasons. Firstly, the Mercury & Venus Section was the first one I ever wrote to when I joined the Association back in the 1990s. Richard Baum was then Director and I still recall his letter, welcoming me to the BAA and encouraging me to make a start on observing Venus – which I have now been doing seriously for many years! My late friend and mentor Sir Patrick Moore was also a director of the Section, from 1955–’63.

For those of you who don’t know me, I am by profession a theoretical physicist at the University of Leicester and over the years I have done outreach work in the form of the TV programme The Sky at Night. I have also written various books and magazine articles about space and amateur astronomy over the last few years. You might describe me as somewhat ‘old school’, in that I am primarily a visual observer of the Moon, planets and a number of variable stars. My drawings are frequently posted on my ‘Member Page’, on the BAA website.

These are exciting times to be an amateur astronomer. Telescopes and imaging software routinely allow amateurs to make observations that in previous years would only have been possible using professional telescopes and space missions. Many of our members routinely capture surface detail on the moons of Jupiter, chart in intricate detail the progress of Martian dust storms and provide excellent photometry on comets and variable stars. Quite recently, we have seen our members branch into spectroscopy and the search for (and monitoring of) extrasolar planets. Clearly we have a lot of talent in the BAA! 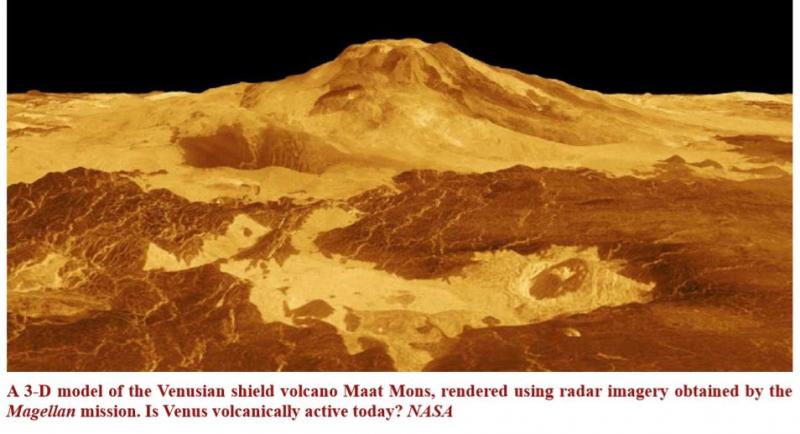 So what about the inner Solar System? Venus, I think, should be of particular interest to amateurs. Some dismiss the planet as a rather bland world, difficult to observe and a considerable challenge owing to its close proximity to the Sun. In fact, nothing could be further from the truth.

While it takes some skill to observe Venus, there is plenty of work for the amateur to do. Many planetary scientists believe Venus to be an active world; there is tantalising evidence from spacecraft data that active volcanism may continue today. In the previous edition of the Journal, Richard discussed fascinating observations made by A. Wesley and P. Miles in 2017, which appear to show bright surface features in infrared (IR). One interpretation is that some of these may be active volcanoes.

Even though there have been a number of space probe missions to Venus, we still don’t have any images of active Venusian volcanoes. Given recent advances in telescopes and IR filters, I believe that imaging any active volcanoes on the night side of Venus is a task which members of our association are well equipped to undertake, and I am keen to see the Section pursue this program.

There is plenty for the visual observer to do. One of the aims of the Section is to investigate the ‘phase anomaly’ – the observed phase of Venus is slightly less than the predicted phase. This was first observed in 1793 by Johann Hieronymus Schröter.

Both imagers and visual observers can record the elusive cloud features in the upper atmosphere, and when there is a good correlation between successive images and drawings these can be used to determine rotational periods of the planet’s atmosphere.

The inner planet Mercury is a difficult object to observe, but a number of dedicated observers frequently capture detail on its scorched surface. The BepiColombo mission arrives in 2021 October and will make a detailed study of this enigmatic world. No doubt it will reveal all manner of wonders and collaboration with amateurs may be helpful.

Here to support your endeavours

Next year I am putting together a Section Meeting in York, with the help of Hazel Collett. I also plan to start a Section Newsletter, with the aim of keeping members up-to-date with the most recent observations of Mercury and Venus.

Whether you are an experienced planetary observer or just starting out in astronomy, I am sure you will find the planets of the inner Solar System fascinating targets. The Section is here to support you in your endeavours and I welcome any observations you have, whether they be images or drawings.

If you have questions or suggestions, you are welcome to contact me at the e-mail address below. I look forward to hearing from you and working with you in due course!