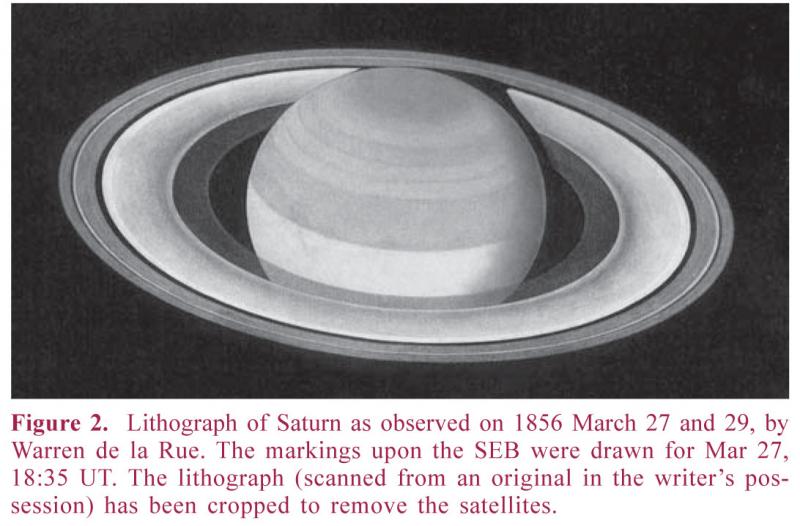 In the 2015-’16 Report of the Council (Journal, 126(5), 298 (2016)) the Archivists mentioned a donation from the family of the late G. E. Satterthwaite. This included several old BAA publications, including a good number of Jupiter Memoirs, and some rare photographs of famous members. We also acquired some old Jupiter notebooks of Major P. B. Molesworth dating from the early 1900s, previously thought lost, a painting of Saturn by N. E. Green from 1883 December (which I realised was published in our Journal (7, 239 (1897)) by Green himself) and another drawing by him of Jupiter, undated, showing the Great Red Spot. These are now in our archives.

There were a number of other original observations which the writer recognised as having been published by the RAS, either in their Memoirs or Monthly Notices, and it was thought proper that these should be given to the RAS. This was done on November 30. Specifically these were as follows:

– A set of six sheets of drawings of Jupiter with and without satellites, in 1843 and 1867, by J. Henry Griesback;

Three observations by Warren de la Rue are also of great interest, for I do not believe they were ever published, nor are they listed in the catalogue of RAS Archives published by Dr Jim Bennett (Mem. R. Astron. Soc., 85 (1978)). The RAS possesses other de la Rue archives, including a collection of his ground-breaking lunar and Jupiter photographs, so these observations were also handed to the RAS, but I would also like to share them with BAA members: see Figure 1. All were made with de la Rue’s 330mm (13-inch) Newtonian. He published a few lithographs of Mars, Jupiter and Saturn within his lifetime, and I have reproduced his well-known Saturn drawing in Figure 2. In volume 1 of his classic work La Planète Mars (1892), Camille Flammarion publishes the two Mars lithographs of 1856.

Finally here is a less familiar portrait of Warren de la Rue that I found when browsing a bound volume of The Science Monthly for 1884 (Figure 3).

Richard McKim, Archivist(Login or click above to view the full illustrated article in PDF format)