Well placed in the late-summer night sky, Aquila is the mythological eagle that carried the thunderbolts of Jupiter. One of our oldest constellations, with a history dating back to the Babylonians and Sumerians, it lies on the celestial equator among rich Milky Way star fields and is a wonderful area for sweeping with binoculars on a warm summer night.

Often overlooked by observers in favour of neighbouring constellations Cygnus and Lyra, Aquila contains many objects of interest, although none of them are particularly ‘stand-out’ and, perhaps surprisingly, there are no Messier objects within its boundaries. There are plenty of open star clusters to enjoy, but perhaps not as many as might be expected due to the numerous dark nebulae in the region that block their light. One intriguing dark nebula is catalogued as Barnard 142/143 and is more commonly known a ‘Barnard’s E’. It really does look like a capital letter E in images and if you are observing from a very dark location, part of the E can even be detected in binoculars.

In addition to open clusters there are a few globular clusters and a bright-ish spiral galaxy, NGC 6814, but where Aquila really excels is in the number of planetary nebulae it contains. Nineteen are listed in The Night Sky Observer’s Guide, Vol. 2 (Willmann–Bell, 1998) and one that deserves to be better known is NGC 6751. It was discovered by the German astronomer Albert Marth in 1863 July while he was working in Malta as William Lassell’s assistant, using Lassell’s 48-inch ƒ/9 speculum-mirrored reflector.

NGC 6751 lies at RA 19h 5.9m and Dec. –6°, which puts it roughly one degree east-south-east of the 4th-magnitude red carbon star 12 Aquilae (which forms the eagle’s tail) and in a field rich with 10th to 13th magnitude stars. Lying at a distance of some 6,500 light-years, its age is estimated at around 3,000 years. None of the planetaries in Aquila are particularly bright and NGC 6751 only shines at magnitude 11.9 (although I always think it appears brighter than this). Nevertheless, it is surprising that its small 20-arcsecond disc was missed by the Herschel family.

Spectrographic studies carried out in 1986 confirmed it as a planetary nebula and showed a bipolar mass outflow from the central dying star. This magnitude 15.4 star is extremely hot, with a temperature of around 100,000K. Images from the Hubble Space Telescope (HST) and the Gemini South telescope in Chile have shown a faint nebulous envelope outside the main nebula, with additional ionised filaments extending into space. Stunning images from these two telescopes are available online. The HST image shows the main nebula in great detail, and with its multiple spoke-like features within a distorted outer rim, it is easy to see why it has become known as the Dandelion Puffball Nebula. The Gemini South image shows less detail in the main nebula, but more in the expelled outer envelope. Some of the outer filaments which are well away from the main envelope are probably related to the dying star’s expelled outer atmosphere, while others are thought to be due to ionisation of the local interstellar medium.

Images of the planetary have been received by the Section from David Arditti, Andrea Tasselli, Dale Holt, Fred Stevenson and, more recently, Peter Goodhew. David Arditti imaged it from his home observatory in Edgware, Middlesex in 2008 July using a Celestron C11 and Artemis 285 CCD camera. The exposure was 15×30s in H-alpha and OIII. North is up in his image and the width is 10.2 arcminutes. David commented on the lack of amateur photographs on the Internet when looking for images to compare with his own. He also observed the planetary visually with his Celestron C14 under a magnitude 4 sky, but saw little detail and was unable to see the central star; a light-pollution reduction filter showed no improvement. 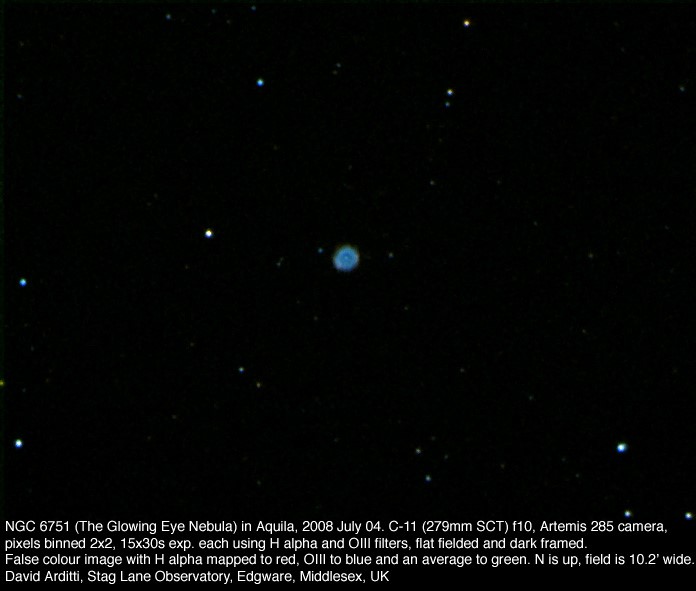 Dale Holt observed the planetary in 2011 September using a Watec 120N video camera coupled to his 505mm Newtonian; he sketched it off the monitor screen. He also observed it through his 153mm refractor and remarked that, surprisingly, the nebula revealed little if any extra detail through the larger telescope compared to the smaller refractor. He summarised his observation by referring to the nebula as a small Eskimo-type planetary (NGC 2392), with a bright central star.

Andrea Tasselli’s wide-field image (see start of article), taken in 2012 through his Intes-Micro M809 8-inch ƒ/10 telescope and SXV-H9 camera, shows the small disc of the nebula nestled in the rich surrounding star fields of Auriga; many of the stars form interesting asterisms of chains and convoluted patterns.

Fred Stevenson imaged the planetary in 2012 June using his 14-inch Meade SCT at ƒ/6.3, coupled to a Meade DSI Pro III camera. The exposure was a total of 68 minutes of narrowband imaging using Astronomik filters (CLS, H-alpha, OIII and SII). Considering the planetary only has a diameter of around 20 arcseconds, Fred’s image shows a lot of structure and hints at what can be seen in professional images.

Peter Goodhew’s superb image was obtained from his twin-telescope set-up in Spain in 2021 May. This shows just what is possible to achieve nowadays for a skilled amateur equipped with excellent equipment and a good observing site. The telescopes were APM TMB LZOS 152 refractors coupled to QSI 612WSG-8 cameras, and the total integration time was 20 hours through a variety of Astrodon filters. The field width is 7.2 arcminutes.

Visual observers with telescopes in the 25cm class will have no trouble in locating the planetary, but unless the seeing conditions allow high powers to be used, they may struggle to see any detail in it. I observed it under a magnitude 5.2 sky with my 14-inch (35cm) Darkstar Dobsonian, both with and without an OIII filter. Without the filter it appeared as a very fuzzy filled-in disc, with a poorly defined outer rim. The magnitude 15.5 central star was not seen. The OIII filter showed no extra detail, although the planetary did appear brighter and slightly larger.

If you observe this planetary nebula, or any of the others in the constellation, do send your observations/images to the Deep Sky Section or post them on the BAA website.