NLC and aurora in the summer sky

Following an early and active start to the NLC season on 2013 May 22/23 and a continuation of this activity, especially into the earlier part of June, the beginning of July showed a revival from the quieter second half of June with good displays on June 30/July 01, July 01/02 and July 04/05. There was a steady flow of sightings throughout July with well observed outbursts on the nights of July 17/18, 18/19 and 20/21. 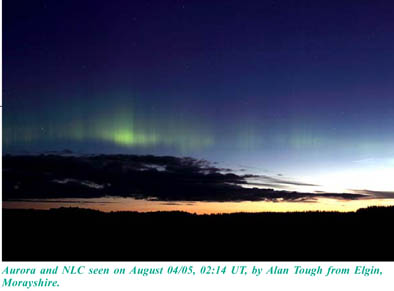 Sightings continued into early August, seven reports being received of the Aug 02/03 display, and the season rounded off with a fine display of NLC and aurora together on Aug 04/05. This unusual occurrence was reported by 13 observers and several interesting and valuable images were taken (see cover) together with a superb video of most of the night’s activity made by Maciej Winiarczyk in Thurso. There has been debate for many years about the effect of the energy creating the aurora on the presence of NLC. It is certainly true that this is an uncommon event at the latitude of the UK and most of Europe, but perhaps this is simply because auroral displays are difficult to see in the bright summer evenings when NLC appear. Another explanation may be that there seem to be fewer NLC at times of solar maximum when auroral displays are more common. A similar occurrence took place last year on the night of Aug 11/12 and the NLC which preceded the aurora seemed to disperse as the auroral display became brighter.

This was not the case on Aug 04/05 this year, as the pre-existing NLC remained visible during and after the auroral activity. Whether auroral energy increases the temperature of the mesosphere and prevents ice nucleation remains to be proven, but this may also depend on the level of energy producing the aurora. This may be determined by whether it is caused by an energetic flare or by a coronal hole, both being further modified by the direction and strength of the Bz. The aurora seen on 2013 Aug 04/05 was the result of a coronal hole high speed stream with the IMF producing a southerly Bz with a strength of –13nT. This resulted in the Kp rising suddenly to 5 at 17:35 UT on Aug 04.

The only reports of aurora during July were from Jay Brausch in North Dakota who saw displays on July 09/10, 11/12 and 14/15, and from an airline pilot, Adrian Anderson, who saw and imaged NLC with an auroral arc on July 13/14 at latitude 54°N and longitude 48°W. This simultaneous display of NLC and aurora was not reported from any other site. Jay Brausch and a number of observers in northern Scotland saw an arc and rays on Aug 15/16 following a solar wind stream of 700 km/s from a coronal hole which produced a Kp of 5.

For ground-based observers, the 2013 NLC season ended quite abruptly on Aug 04/05 but the AIM satellite CIPS images show ice in the mesosphere extending quite far southward for a number of days after that date. Unless there was extensive cloud cover over the UK and Europe it is surprising that there were no further reports of NLC, although Dr Peter Dalin of the Swedish Institute of Space Physics saw bright NLC on the evenings of Aug 10/11 and 11/12 from 67.8°N.

Despite the early end to the NLC season there has been a large number of sightings reported to the Director and to Tom McEwan’s website www.mcewan.co.uk/nlc. At the time of writing, a total of 414 observations has been received from 120 observers together with many images and a few videos and animations. NLC was seen on 7 nights in May, 28 in June, 25 in July and 3 in August making a total of 63. The most southerly sighting this year was from Somogy in Hungary at a latitude of 46.4°N. The table gives comparison figures for the years 2006–2013.

The Director thanks all those observers who have sent reports and images of NLC or aurora and also Tom McEwan who has quickly updated his NLC website throughout the season.