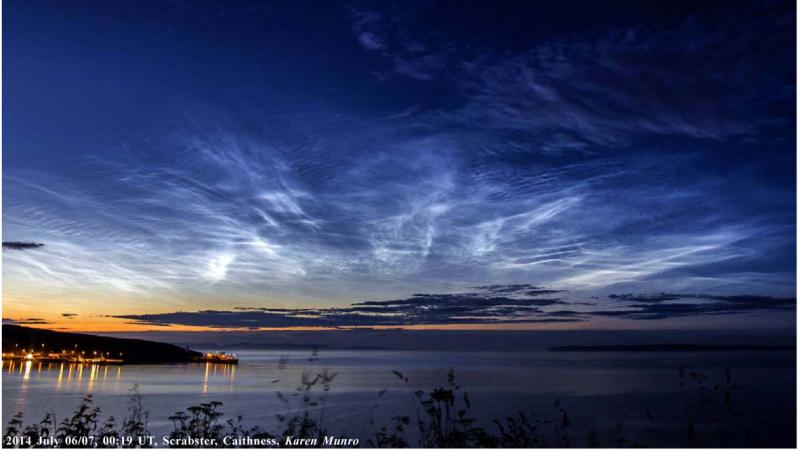 Noctilucent clouds (NLC) are seen and recorded by a large number of observers in the UK and more northerly latitudes of Europe. These upper atmospheric clouds occur usually between late May and early August when the temperature at the mesopause is at its lowest. Very low temperatures at the mesopause allow water to nucleate as ice round minute particles of dust at that altitude and these ice crystals grow as they fall and become large enough, at around an average height of 82-83km, to be visible. The amount of ice present at that height and the very low atmospheric pressure means that any sunlight reflected is relatively small, and will not allow the clouds to become visible until contrast with the background sky increases as the Sun sinks below the horizon. In summer months the Sun will reach the required dip below the horizon of 6°–16° between about 22:00UT and 03:00UT, and the clouds will be seen in a northerly direction although they may appear anywhere from west through north to east.
It has been reported on a number of occasions that NLC frequency is related to the solar cycle with the assumption that increased solar radiation at solar maximum suppresses NLC formation by not allowing the temperature at the mesopause to reach that required for ice nucleation. The past two solar cycles have shown this quite clearly with NLC reaching maximum frequency in years of solar minimum. This was well demonstrated in the recent years of low solar activity from 2006-2009. Since 2010, solar activity has been increasing and it is generally accepted that solar cycle 24 had two peaks, one in 2012 and a second and slightly higher peak at the beginning of 2014.
However, the overall activity of cycle 24 is believed to be the lowest since cycle 14, which peaked in 1907. Given previous relationships between NLC frequency and the solar cycle it would be expected that NLC frequency would have significantly reduced from 2010 to 2014, but the reduction in frequency found by observation does not show a marked decline. One explanation for this lack of fall in NLC frequency must lie in the low activity  level of solar cycle 24.
Observations received from the NLC seasons in 2013 and 2014 are presented in Tables 2 and 3. A small number of sightings was received from observers in USA and Canada. These have been included for completeness but the individual sightings and total number of these are shown in, and at the end of each table….