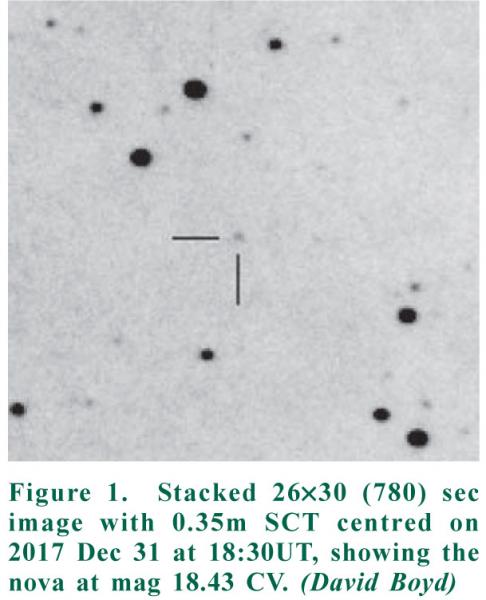 The recurrent nova M31N 2008-12a in M31, the Andromeda galaxy, has intrigued professional astronomers for some years. With a recurrence period of around a year it is, by a substantial margin, the most frequently recurring nova known. It contains a relatively massive white dwarf believed to be a likely candidate to become a type 1a supernova. Since 2008 it has been erupting fairly regularly in the second half of each year, with an average interval between eruptions of just under a year. Eruptions (to mag 18) only last a few days before fading back to quiescence at around mag 24. During each eruption the nova has been intensively observed with both ground and space-based instruments to try to understand its behaviour.
The professional community recruited a small nova monitoring group of amateurs who were willing to observe M31 every clear night. Their aim was to try to catch the next eruption as early as possible to maximise the scientific yield during its brief bright period. However the outburst predicted for 2016 mid-September did not occur until December 12.[1] As a result, the prediction for 2017 was only loosely between 2017 September and 2018 January.
Between 2017 August and December I observed the same patch of sky in M31 44 times in the hope of catching the early stage of an eruption. After sunset on New Year’s Eve 2017, the sky was overcast with a 20mph blustery wind and an almost full Moon. However there were some clear patches, so I thought it was worth a try. My first 60-sec exposures were all spoilt by wind shake so I reduced to 30-sec.
Of my next 54 images starting at 18:17 UT about half were steady enough to be worth stacking with Astrometrica. I knew from memory where the nova should be – I had studied that blank patch of sky many times. But it wasn’t blank this time. There was a distinct image at exactly the correct coordinates and Astrometrica told me it was mag 18.5. I checked my emails again. There was no announcement that an eruption had been detected. Was I the first to spot it?
At this point I needed a cool head. I checked the instructions sent to the monitoring group earlier in the year about what to do if you thought you had detected an eruption. I measured my stacked image with AIP4WIN to get an accurate magnitude for the nova, and then composed and sent an email announcing a suspected discovery to the group at 19:12 UT with an attached image (Figure 1) and waited. 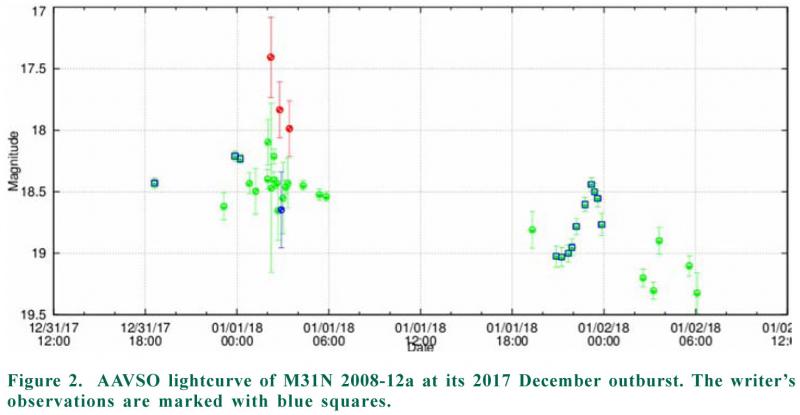 Within minutes Martin Henze at San Diego State University replied ‘Your jpeg looks good and detection is likely’. He asked for a FITS file to confirm the coordinates. Shortly afterwards confirmation of detection came from Kamil Hornoch at Ondrejov Observatory in the Czech Republic. Martin immediately issued an ATel (Astronomers’ Telegram) announcing the discovery.[2] He also triggered the Swift satellite to observe the nova.
Two hours later an ATel appeared saying that the 2m Liverpool Telescope on La Palma had obtained a spectrum showing Balmer emission lines similar to those seen in previous eruptions. My scope continued taking images into the early hours of New Year’s Day (while I welcomed in the New Year!). These showed the nova was still brightening. Later that day a group of Chinese astronomers announced they had obtained images at around 14:00 UT on December 31 which showed the nova fainter than on my discovery images. They had apparently not examined their images until they saw the ATel – a missed opportunity. Fortunately the following evening, January 1, was also clear and I recorded a further 3 hrs of photometry showing the nova had faded to mag 19, exhibiting short-term variability as it did so (Figure 2).
David Boyd
1    Boyd D., J. Brit. Astron. Assoc., 127(1), 9 (2017)
2    Astronomer’s Telegram #11116, http://www. astronomerstelegram.org/?read=11116