John Wall was born in Crayford, Kent on 1932 June 26. Within a year the family moved to Dartford where he spent most of the next 60 years of his life. He was evacuated to Launceston to avoid the worst of the blitz, returning to Kent in 1942.
John developed an early interest in astronomy, and telescopes in particular, while working as an apprentice for Vickers Engineering. His apprenticeship was interrupted by National Service with the REME in Malaya, but in 1953 he returned to civilian life and started grinding telescope mirrors and lenses of ever increasing size. About this time Dr Hugh Percy Wilkins was teaching an evening class at Crayford Manor House (CMH). John joined the class and impressed Dr Wilkins with his newly built refractor. 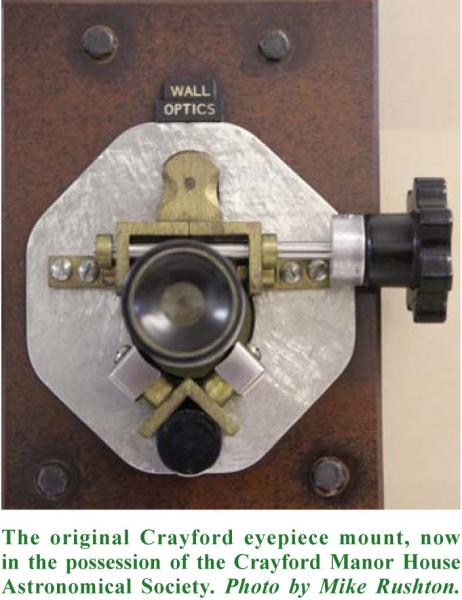 From then on there was no stopping John with his enthusiasm for novel telescope designs. He was always willing to make use of any materials that came to hand such as car axles for polar and declination axes. He realised while constructing these instruments that helical and rack-and-pinion focusers had their limitations. He then designed a novel mechanism with no backlash that involved mounting the eyepiece between four rollers and placing a focusing pinion between the top two. The design also enabled rapid swapping of eyepieces in the mount.
The publication of this design in the Journal (81(2) 118, 1971 February) after he joined the Association in 1969 revolutionised telescope focusers. He intentionally did not take out a patent, preferring to give the design to the astronomical community who took it up with enthusiasm, especially in the United States, where it became known as the Crayford focuser and was produced commercially. Throughout his life John built Crayford eyepiece mounts out of all sorts of materials including wood.
John’s first telescope for CMH was a twelve-inch (305mm) Newtonian reflector, which was subsequently replaced by a twenty-four inch (610mm) Cassegrain which did sterling service until the Manor House closed some six years ago. John found a new home for this instrument with York Astronomical Society.
In the meantime, John had been busy constructing a thirty-inch refractor, the lens of which he set up for testing using the lights of the QEII bridge at Dartford through his open window. He gave this telescope to the Hanwell Community Observatory. Even this was not his biggest project as he also constructed a thirty-two inch (813mm) reflector which when set up in his garden must have scared the neighbours. His workshop consisted of two sheds at the bottom of his garden which contained a lens and mirror grinding machine of his own design plus a lathe and large amounts of Dexion for structural support of the optical elements. He was much more of an instrument maker than an observational astronomer.
In 1970 he met Joyce Porritt, a zoologist, through the Crayford Society, and they quickly became a couple. Some thirty years later they moved from Kent to Coventry where John continued his telescope building, albeit on a smaller scale. Many BAA members will remember his attendances at the Winchester weekends where he would describe his latest attempt to build ever bigger telescopes with exotic folded optics. In later years he became too ill to travel to Winchester although he kept in touch with Crayford.
John died on 2018 January 27 at age 85.