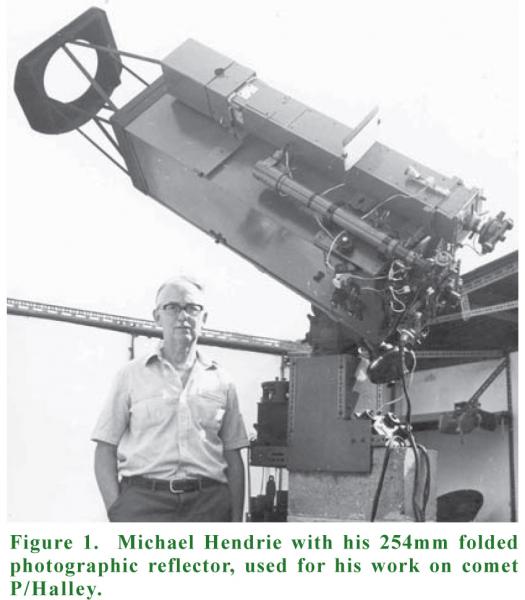 With the death of Michael Hendrie at the age of 87, the Association has lost one of the great classical astrophotographers, as well as a distinguished past Director of the Comet Section.

Michael James Hendrie was born on 1931 February 14, and was educated at Cranbrook School. He did not enjoy boarding, but received a sound education. He recalled being a fast runner in those days, and it was certainly a good way of getting into town in the limited leisure time available! There were workshops, too. Michael and co-author JV (who met in 1957) both held the view that despite having experienced in early childhood the ravages of World War II, the immediate post-war period, with its relatively dark skies, helped stimulate their interest in astronomy. Michael exposed his first astronomical photograph in 1950, aged 19, and his first comet photograph was of P/Schaumasse in 1952 taken from the parental home in Westcliff-on-Sea.

Michael joined the BAA in 1951. His first appearance in print, appropriately enough, was in the report of a meeting talk he gave when showing photos of Comet Honda 1955g. The following year, using predictions by M. P. Candy and Dr J. G. Porter published in the BAA Handbook, Michael was able to make an independent photographic recovery of periodic Comet Crommelin (designated 1956g; period 28 years) on the same night that it was photographed by L. Pajdušáková in Czechoslovakia.

Michael’s statistical analysis of comet discoveries formed an important early contribution to the literature (Journal, 72, 384-396 (1962)). Michael wrote or introduced a series of articles entitled ‘For the Beginner’, and in the mid-sixties acted as Assistant Editor of the Journal. Working in London, Michael would find it convenient to serve on the Council, also. For many years he used a 5-inch (125mm) refractor from the BAA Instrument Collection for his guiding telescope. This had once been used by the solar observer F. J. Sellers, and Michael recalled collecting it from an attic in Muswell Hill. To this equatorial he attached a large comet camera. Later he made a wide-field 10-inch (254mm) folded reflector for photographing P/Halley (Figure 1)…. (continued)