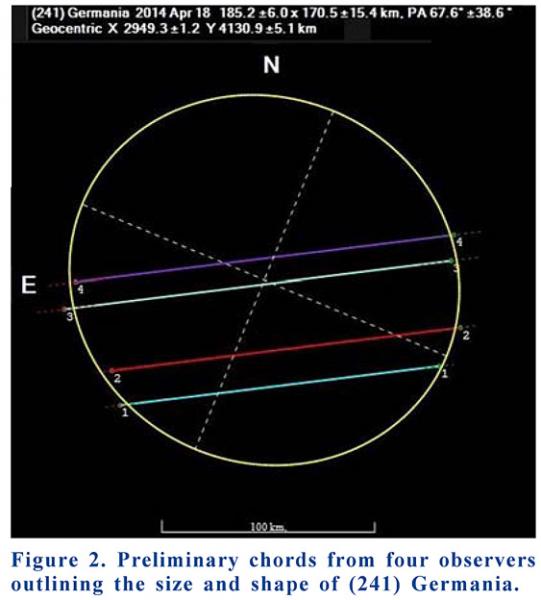 s predicted to occult an 11.8 magnitude star in Gemini, 2UCAC 38779497, on Friday 2014 April 18. The maximum length of disappearance of the star was expected to be 8.5 seconds for someone in the centre of the shadow.
The predicted track of the occultation passed NW to SE across the UK at 20:59 UT. An alert was sent to Asteroids & Remote Planets Section (ARPS) members, and a short article and link were placed on the BAA website. The intention was to engage potential observers, and several enquiries were received as a result.
The prediction, by Steve Preston, could be found at http://www.asteroidoccultation. com/2014_04/0418_241_32426.htm
It was expected that the target star could be seen visually in a 20 cm or larger instrument. This was generally not the case, since it became apparent that the published prediction gave a brighter magnitude than reality. A 20 cm Newtonian was just able to pick up the star by averted vision, and CCD images supported this. The star was nearer 12.5 V (not 11.8). This put the star outside the range of visual detection for most observers. Richard Miles indicated a 25 cm or larger telescope would be needed to monitor the brightness of the star visually with any certainty.
Four observers in the UK successfully monitored the appulse by video and CCD (Birtwhistle, Haymes, Pratt and Talbot) with Alex Pratt (Leeds) obtaining the only positive UK observation since he was close to the centre line with fair weather. David Pettitt’s planned observation was interrupted, and Phil Denyer suffered from cloud.
Four observers (Bulder, Winkel, Rutten, Dangl) posted results from continental Europe via the PLANOCCULT list server.
Some e-mail comments
John Talbot: It was fun watching the asteroid creep up on the star and I was convinced it was going to be a positive but it was a close miss here…
Alex Pratt: It’s been a long time since my last positive. I agree that the asteroid could be clearly seen approaching the star. I saved a couple of short videos during this time.
Tim Haymes: The asteroid and star merged, but there was no occultation for me. When I observed the star visually the previous day in a 20 cm x250, I found the target star was faint and visible only by averted vision.
Alex Pratt also noted the star looked fainter than the UCAC2 catalogue value used in the prediction. The UCAC4 catalogue gave 12.5V
Roger Pickard (VSS): You can get a pretty accurate V magnitude by using the formula in the JBAA paper by Dymock & Miles (JBAA 119(3), 2009) as long as you have the CMC-14 data. This you can download using Guide and I have a spreadsheet that does the conversion for you. The mag is then 12.87V
Results can be seen on the EURASTER. NET website. The four chords (see Figure 2) indicate the time periods when the star was hidden (occulted). This profile is based on the occultation durations and the geographical position of the observers, from their reports. The asteroid profile was generated with Occult 4 software and is preliminary.
Conclusion
The calculated dimensions of the asteroid from these observations are 185±6 x171±15 km which is in agreement with previous results of 184 km, and there was a path shift of about 50 km to the NE, with the occultation occurring about 9s earlier than predicted.
Tim Haymes, Asteroid Occultations coordinator, ARPS. [tvh.observatory@btinternet.com]