Observations of Mars & Saturn at the Lowell Observatory in 2018 July 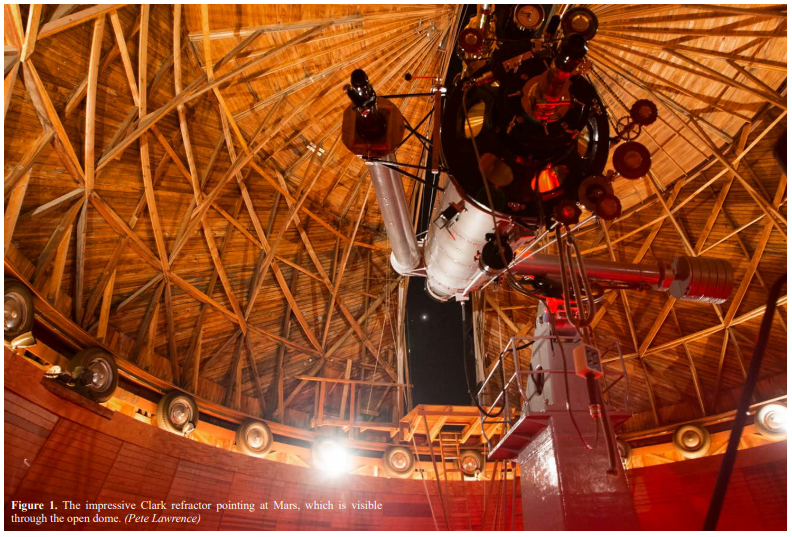 The 2018 perihelic opposition of Mars would be an excellent one for amateur astronomers. The planet would reach a large apparent diameter of 24.2 arcseconds, and would close to some 57.6 million kilometres from Earth. Opposition was due to occur on 2018 Jul 27, during which time Mars would reside in the constellation of Capricornus.1

For UK observers however, things did not look quite so promising: the planet would be very low down in the southern skies, barely rising above the treetops. The low altitude would also likely mean views of the planet would be through unstable air, exacerbated by the hot summer weather. With this in mind the authors decided to head south to the Lowell Observatory around the time of opposition, in order to observe under more favourable conditions. Abel contacted Bill Sheehan – a frequent visitor to the Lowell Observatory – and together with Elizabeth Dodd (the Lowell Public Program Scheduler), arrangements were made to use the observatory for five consecutive nights in 2018 July.

The Lowell Observatory, situated on Mars Hill in Flagstaff, Arizona, was established by Percival Lowell in 1894 with the primary ambition to study Mars, and in particular the canal network which had caught the imagination of astronomers and the general public alike. Lowell was born into a wealthy family on 1855 Mar 13 in Boston, Massachusetts. He attended Harvard University and in 1876 graduated with a distinction in Mathematics. After Harvard, he embarked on a semi-official diplomatic career in Korea. In fact, Lowell travelled extensively in the Far East and wrote a number of books about Japanese culture.2

During the Mars opposition of 1877, the Italian astronomer Giovani Schiaparelli made his observations of straight lines or canali on Mars and in doing so, ignited the Martian canal controversy which would last well into the 20th century. There is no doubt that Lowell quickly accepted the idea that a Martian civilisation had constructed vast canals on the surface of the planet: the last heroic effort (Lowell believed) of a Martian race trying to survive on their dying world.

On returning to the US, Lowell decided to dedicate the rest of his life to astronomy – in particular, to the study of Mars, with the aim of proving the reality of the canals. In 1894 he established the Lowell Observatory, which housed a 24-inch refractor manufactured by the famous telescope makers Alvin Clark & Sons (Figure 1).

The canal network was indeed a product of intelligent design – unfortunately the intelligence was Earth-based rather than Martian. Although doubt existed in a number of minds about the reality of the canals,3 it was the biologist Alfred Russel Wallace who showed that the Martian atmosphere was far too thin for liquid water to exist on the surface and concluded that ‘only a race of madmen would build canals under such circumstances’.4 Although we tend to think of Lowell and his canal networks as science-fiction relics of another era, we should remember that in establishing a large observatory which continues to be of service to science and public outreach he gave an enormous contribution to astronomy.

Perhaps less well known is the work done by Vesto Melvin Slipher at the observatory towards the end of Lowell’s life. Slipher used spectroscopy to show that a number of galaxies possessed recessional velocities. He also established the blueshift of the Andromeda Galaxy.5 Edwin Hubble would later make similar observations and conclude that the Universe is expanding.

After Lowell’s death the observatory continued to make many astronomical discoveries; as is well known, in 1930 Clyde Tombaugh discovered Pluto using the 13-inch astrograph telescope.6

The Lowell Observatory has expanded enormously since Lowell’s time; alongside the Clark refractor, the observatory operates a further 11 telescopes at a number of different sites. These include the Discovery Telescope (4.28m Ritchey–Chrétien) located in Happy Jack, Arizona.

Anderson Mesa Station is a dark-sky site located some 65km south-east of Flagstaff and houses an impressive number of instruments: the Perkins Telescope (180cm Cassegrain), the John S. Hall Telescope (110cm Ritchey–Chrétien), the Lowell Observatory Near-Earth Object Survey (LONEOS) 64cm Schmidt, and the Planet Survey Telescope.7 All of these telescopes allow the Lowell Observatory to continue a rather extensive research programme; recent discoveries include evidence of carbon dioxide ice on three satellites of Uranus and evidence of water vapour in extrasolar planet HD 209458b.8

The Observatory is acutely aware of its astronomical heritage and, as one might expect, it has an impressive outreach program. The Mars Hill site has a number of exhibitions and telescopes open to the general public; on any given day there are a number of activities the public can get involved in. There is viewing through the solar telescope and the Clark Telescope is open for public viewing in the evening (weather permitting).9 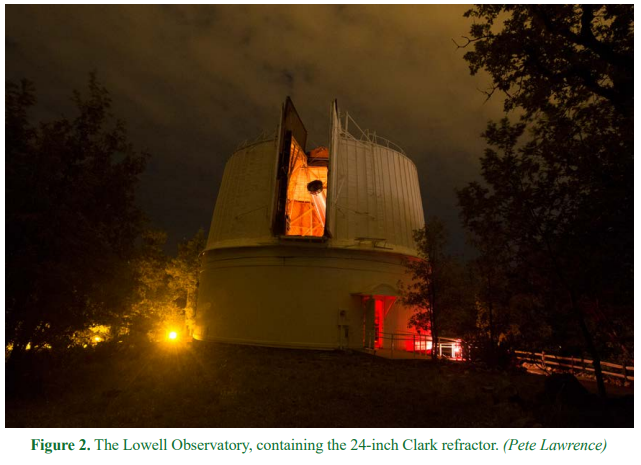 The Clark refractor has recently been refurbished and is a rather splendid sight as one enters the observatory (Figure 3) looking much as it would have done in Lowell’s time. The technical details of the Clark refractor are as given in Table 1.10

Flagstaff has of course expanded a great deal since Lowell’s time, but the city has made good provision for the observatory, especially when it comes to light pollution. In fact the Mars Hill site is rather dark – due largely to the lighting rules in Flagstaff, which prohibit unnecessary light and insist that all lighting is white and shines down onto the pavement. With its good location and its friendly openness to amateur astronomers, the Lowell Observatory is an ideal place to venture to when the bright planets are low in UK skies.