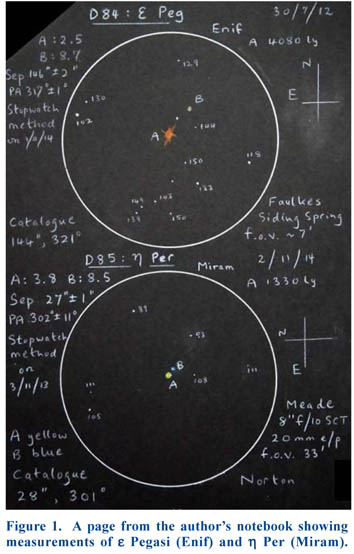 Observing the time it takes for two stars to orbit each other in a binary system is still the only direct way to measure the mass of a star – knowledge that is central to the study of how stars are born, live their lives and die. To this end, the measurement of the two quantitative parameters of these systems, their position angle (measured north, through east, from the primary star to the secondary), and separation, is a fascinating observational exercise. Orbits can then be determined for genuine binaries (not for optical doubles, of course) from these measurements made over many years. A cheap and engaging method of doing this is the stopwatch method described in the Journal, vol. 124(3), 2014 June.

In Figure 1, an image of e Pegasi (Enif) was taken by the author as part of a school educational session with the remotely-operated Faulkes 2m reflector at Siding Spring, which gives a field of view of 7 arcmins, and a sketch was made from the image. Enif is about 6000 times more luminous than the Sun, and of the two stars close by (all three making an optical system) the furthest one (labelled B in the sketch) was mentioned by William Herschel. He said it showed ‘an apparent pendulum-like oscillation in the same vertical as the main star when the telescope is swung from side to side.’ He suggested that the seemingly larger arc traversed by the small star was due to the greater time required for its faint light to affect the eye so the ‘reversal of motion is first perceived in the bigger star’ (Burnham’s Celestial Handbook, vol 3, p1372).

Enif was later observed visually by the author from his home in the UK and the position angle and separation were measured by the stopwatch method. Catalogue values are given for comparison purposes (from the Washington Double Star Catalogue). On the same page from the author’s sketch book is a drawing of h Per, also called Miram, with the stopwatch measurements given for that star as well. The two main yellow and blue stars have a common proper motion so they may be a binary system though their configuration is hardly changing.

Alternatively, observers wishing to take images at their telescope, can use a method the author has investigated using the free open-source software Aladin. A Jpeg image taken at the telescope can be submitted to astrometry.net. There the image will be imprinted with the RA and Dec of the field of view, provided there are sufficient field stars in the image to effect a fix, and returned as a FITS file (Flexible Image Transport System, widely used by astronomers for carrying data with the image). Aladin will then use the coordinate system to work out the separation and position angle.

The reticulated astrometric eyepiece is another, though expensive, method. With practice, accurate measurements can be made with this using various techniques.

Observations are welcomed by the Deep Sky Section in the form of images, sketches, measurements or descriptions. Suggested targets may be found in the Cambridge Double Star Atlas (Mullaney & Tirion, Cambridge Univ. Press, 2009) in which the two authors pick out their double star showpieces (both binary and optical). Observers are, of course, welcome to submit observations of their own favourite double stars.