Observing Gaia from launch to L2 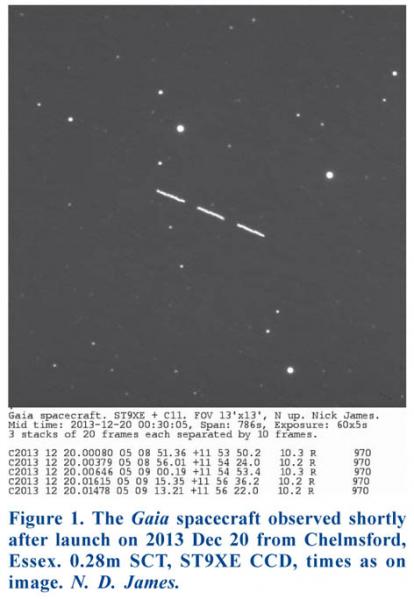 The ‘Global Astrometric Interferometer for Astrophysics’ or Gaia spacecraft was launched on 2013 December 19 and is now at its final location, 1.5 million km from Earth in the anti-solar direction, at the L2 Lagrangian point. Gaia is an ESA mission intended to perform extremely accurate astrometry on a billion stars.
In order to fulfil its mission goals the position and velocity of the spacecraft need to be known to a very high level of accuracy (around 150m and 2.5mm/s respectively). This can be achieved with standard radio tracking techniques augmented by dual-station Very Long Baseline Interferometry (VLBI) measurements but the latter are very expensive.
High precision optical astrometry from the ground can reduce the need for costly VLBI measurements as long as the astrometry can achieve milli-arcsecond precision.
In order to determine the likely magnitude of the spacecraft at L2 the ground based observation team requested photometry from amateurs as the spacecraft was on its way to its final destination. Immediately after launch it was expected that the spacecraft would be around mag 12, fading to 18-19 at L2.
I observed Gaia on the evening of the launch when it was 158,000 km from my observatory at Chelmsford. It was moving rapidly across the sky but was much brighter than I expected at magnitude 10.2 (Figure 1). On December 22 I imaged it again but it had faded to mag 18.2 even though it was still only 450,000 km away. The reason for the dramatic fade was that the 10m diameter sunshield had initially been reflecting sunlight directly back at us. In technical terms the Solar Aspect Angle (SAA) was zero degrees. By the second observation the spacecraft had been oriented to its operational SAA of 45° so sunlight was being reflected off into space and all we were seeing was light scattered off imperfections in the reflective material.
The fact that the spacecraft was already so faint meant that it was likely to be around mag 20-21 at L2. This was considerably fainter than expected and I assumed that I would be unable to observe Gaia at L2 since this would be too faint for my 0.28m telescope.
However, during commissioning, as is usual, a number of small problems were identified. One of these was a stray light problem that, if not resolved, could affect the limiting magnitude of the detectors on board. In order to characterise this, the mission team decided to slew the spacecraft through a range of aspect angles to see how the effects of stray light changed. So far there have been two of these events and in each case the SAA was reduced to zero degrees for a day and then returned to its nominal value.
Unfortunately, the actual slews took place during daylight as seen from Europe, but we did have the opportunity to observe the spacecraft when it was at an SAA of zero during the intervening night. I took the image shown in Figure 2 on 2014 March 6 when the magnitude of the spacecraft was 14.8. The next day the SAA had returned to 45° and the spacecraft was back to mag 20.5, beyond the range of my system.
At the time of writing analysis of the stray-light problem is continuing but the team is hopeful of a solution, perhaps operating the spacecraft at a slightly different SAA than originally planned.