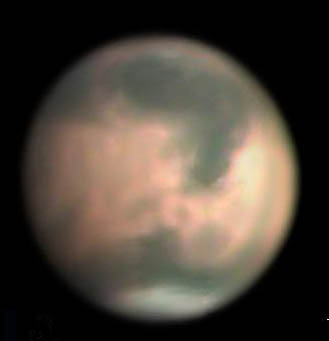 Mars will be at opposition on 2014 April 8 (with a seasonal date defined by Ls= 114°, corresponding to early summer in the martian northern hemisphere), with a diameter of 15.1 arcseconds, bringing the planet a little nearer than in 2012. Closest approach occurs on April 14 and the declination will be around 5°. The planet’s diameter is 6 seconds or greater between 2013 mid-December and 2014 October, so observations (if not yet begun) should start as soon as possible.

For seasonally comparable oppositions from the past, the 1950 and 1952 approaches (at Ls= 97° and 136° respectively) will serve us well in showing the planet close to the N. summer solstice and in N. midsummer, respectively.

From 1950 we offer some previously unpublished sketches from the notebook of Edward Collinson, then living at Felixstowe, who went on to become Mars Section Director from 1956-1979. Collinson (Figure 1) experienced some spells of superb seeing in the spring of 1950 and, although the opposition was aphelic, he later told the writer that he did his best Mars work during that year (Figure 3).

The BAA’s most prolific contributor at the next opposition of 1952 was Tsuneo Saheki (Figure 2), who lived at the time in Osaka, Japan. We have many of his original pencil sketches, and some are reproduced for the first time in this Journal (Figure 4) to show some of the changeable features to look for in 2014. Saheki had a tendency to show small details in the form of streaks, whereas Collinson was more conservative, and Figures 3 and 4 can be directly compared. Both observers placed the markings accurately.

The martian albedo features vary considerably over time due to shifting dust deposits on the surface. In the 1950s the planet looked rather different from how it does today. The IAU albedo map by G. de Mottoni also dates from that epoch, being based upon photographs obtained between 1941 and 1952. There was the very prominent Nepenthes curving out of the E. (or p.) side of Syrtis Major, running as far north as Thoth (or Nodus Alcyonius, the latter in a slightly different position some 10° E. of where it is today). Cerberus-Trivium Charontis was much more prominent than it is now: it has been faint since the mid-1980s.

In the old drawings there is also marked a very large development just E. of Utopia, which was known as Nodus Laocoöntis. Though not illustrated here, the features around Nilokeras were also subtly different from today, and Solis Lacus was much smaller. Future dust storms could modify these markings at any time: the Director has been waiting for the reappearance of Nepenthes for forty years – so far without success!

Although we can never predict exactly how the surface markings will appear, we can certainly anticipate white cloud and polar cap behaviour rather accurately, and as illustrations we refer readers to the images taken at the opposition of 1999, 15 years earlier. At opposition the planet will be experiencing early summer in the N. hemisphere (summer solstice being reached at Ls= 90°), and the decay of the N. polar cap will be well advanced. Look also for any rifts in the residual cap and outlying, recently detached parts.

There will be extensive white cloud activity, and it is an optimum time for imaging the equatorial cloud belt in blue light: telescopically, this begins to be prominent around Ls= 45°. Also expect to see several evening orographic clouds over the martian volcanoes.

Another interesting feature, described and illustrated in the second interim report on the 2011-’12 apparition is the onset of cyclonic clouds over Baltia (NW of Mare Acidalium) at the edge of the NPC. The seasonal onset of the N. polar hood will be observable in 2014: it does not occur simultaneously at all longitudes, and it may dissipate and reform before becoming permanent. The time to watch is around Ls= 160° (2014 mid-July).

Small scale dust activity may be seen at almost any time, but large scale activity is not likely to be witnessed before the S. spring equinox at Ls= 180° (2014 mid-August). Any such event should be reported at once.

Map resources, references to books and past reports as well as to the current Section Programme are all posted at our website.