OSIRIS-REx and the origins of asteroid Bennu 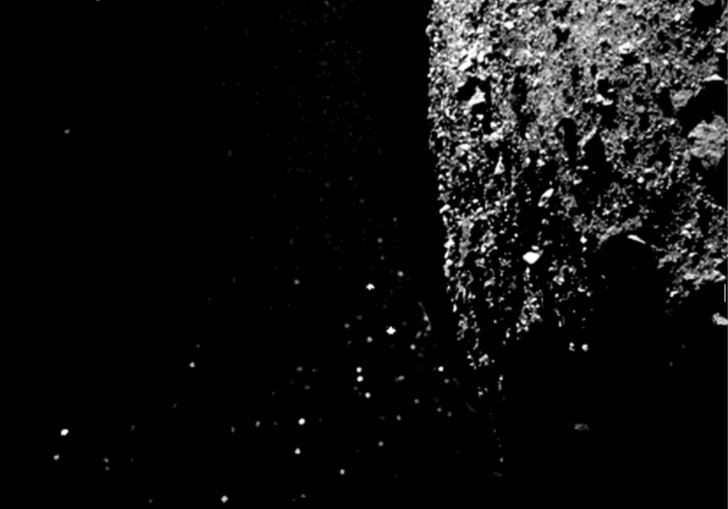 Centimetre-sized particles being ejected from the surface of Bennu, taken by OSIRIS-REx on 2019 Mar 19. NASA/Goddard/University of Arizona/Lockheed Martin

Small solar system bodies such as asteroids have a variety of possible origins. Some may be defunct comets that have essentially lost their volatiles, while others may have formed when fragments of material from the early solar nebula aggregated to form loose rubble piles.

Such fragments may have once been part of a much larger primitive body that broke up following collision and so by investigating rubble piles, we can study this early material. Examples are the rare carbonaceous chondrite (CC) meteorites such as Murchison, belonging to the CM group, which contain phyllosilicates indicative of extensive aqueous alteration, as well as an extraordinary range of amino acids which are organic components of life. 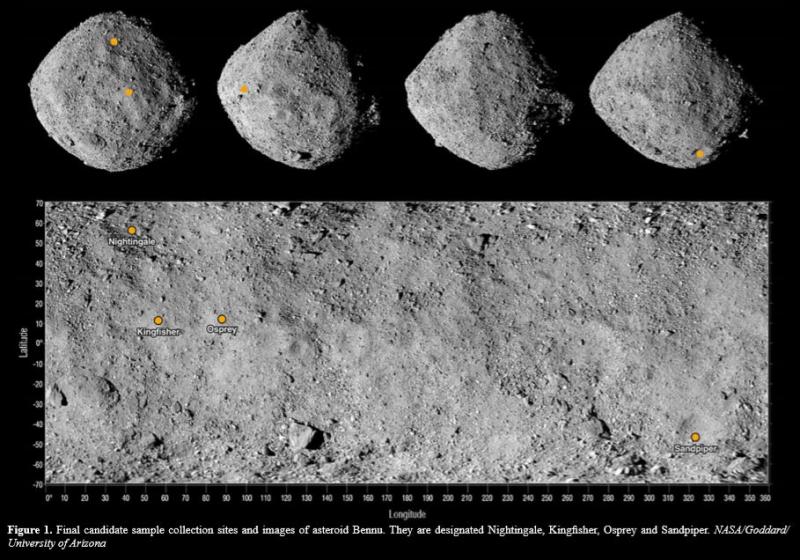 Dark asteroids belonging to the rare B-type group and CC meteorites reflect light similarly. B-types are generally found in the outer Main Belt, but a few are near-Earth objects, such as (101955) Bennu discovered in 1999. Bennu is therefore an attractive target for a space probe mission and NASA devised a mission named OSIRIS-REx, launched in 2016, to visit and sample material from this 500m-sized body. The acronym stands for ‘Origins, Spectral Interpretation, Resource Identification, Security and Regolith Explorer’.

OSIRIS-REx reached Bennu on 2018 Dec 3 and entered orbit at a distance of 19km, which was gradually reduced to just 2km. NASA expected the surface to be a lot smoother than found, so this has created challenges for the planned touch-down and sample collection in the latter half of 2020. Currently four landing sites have been selected, shown in Figure 1.

The sites differ appreciably: ‘Kingfisher’ is a relatively new crater with the highest chemically-bound water (OH) signature; ‘Osprey’ is located on a low-albedo patch with a wide variety of rocks; ‘Nightingale’ is abundant in fine-grained material with a large variation in colour; and ‘Sandpiper’ is situated between two young craters, in rough terrain. Minerals vary in brightness, with hints of hydrated minerals. 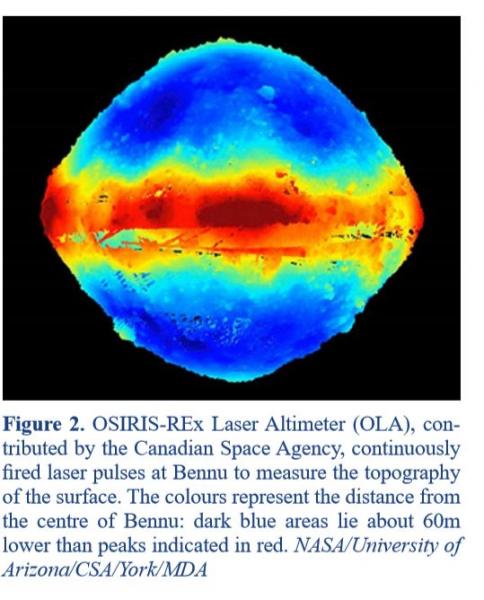 Note the unusual shape of Bennu, which exhibits an equatorial ‘ridge’ and rather pointed poles akin to a spinning top. This is a result of its relatively fast rotation rate (with a period of 4.29h), which over time causes some loose aggregates in the rubble pile to move away from the poles towards the equator, under the influence of centrifugal force. The colour-coded image in Figure 2 shows the departure of the surface from that of a sphere.

Bennu’s surface is strewn with light and dark boulders, the differences in albedo arising from composition, particle size, space weathering or some combination of these. The space probe carries two hyperspectral spectrometers for measuring mineralogy, chemistry and temperature. A three-micron band is evident, consistent with hydrated silicates, and its specific position at 2.74µm (microns) is similar to CM2 meteorites,1 such as the Murchison carbonaceous chondrite.

Fine-grained material appears to have been gradually dislodged and lost into space as pebbles and boulders migrated towards the equator. Surprising evidence that Bennu is currently active has been found from visual inspection of optical navigation images, which show an enhancement of the stellar background near the limb caused by the ejection of particles (see image at top of page).2

Mechanisms responsible for particle ejection include sublimation of volatiles, electrostatic levitation, dehydration and thermal fracturing or disintegration. Searches for cometary features along Bennu’s orbit and in the anti-solar direction had found no evidence of mass loss. Other searches for small natural satellites in orbit around the asteroid, using OSIRIS-REx’s cameras during the final approach phase, also failed to reveal the presence of objects larger than several centimetres. 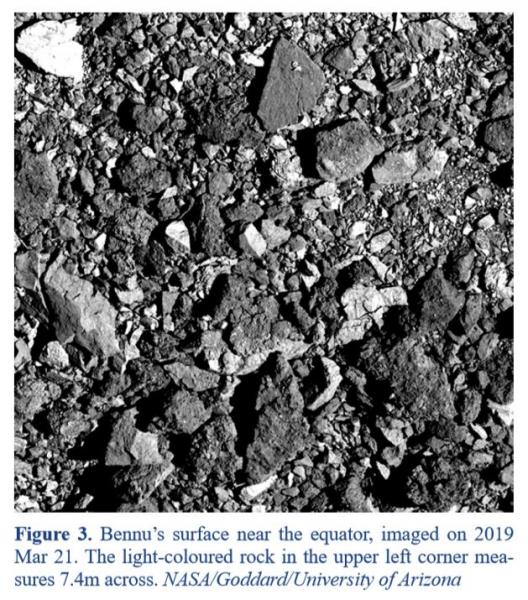 It is hoped that following a challenging landing manoeuvre in 2020, samples of 60g or more will be captured after contact with the surface, when a burst of nitrogen gas will blow regolith particles smaller than 2cm into a sampler head at the end of a robotic arm. A five-second timer will limit collection time to mitigate the chance of a collision. After the timer expires, the back-away manoeuvre should ensure a safe departure from the asteroid – a difficult task given that the probe has two large solar array panels!

Following a successful sample acquisition phase, the material will be stowed in its sample-return capsule, landing in a military testing area of the West Desert, Utah, USA on 2023 Sep 24.

I would like to acknowledge the contribution of BAA member Mike Miller who, in August this year – guided by OSIRIS-REx Ambassador, Dolores Hill – paid a visit to scientists including Carl Hergenrother (Associate Staff Scientist) working on the OSIRIS-REx project at the Lunar and Planetary Laboratory at the University of Arizona. Thanks Mike!