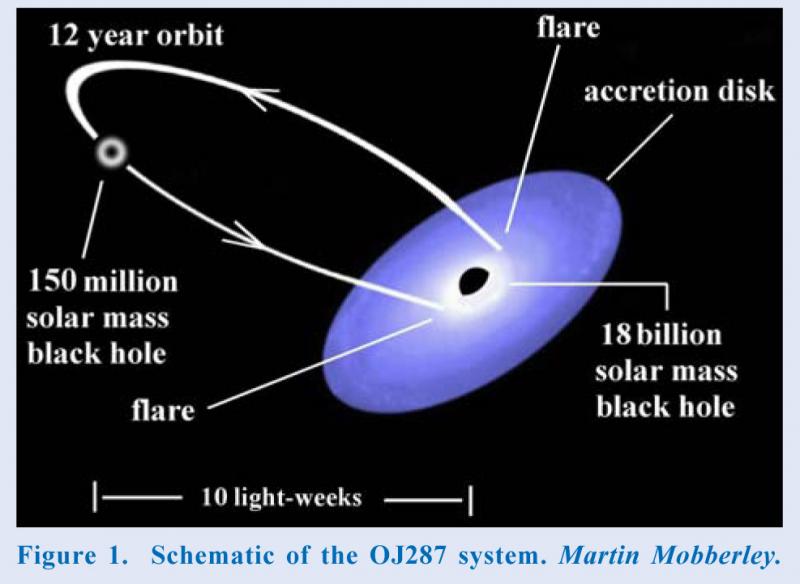 Lying just 3.5° east of the open cluster M44 in the constellation of Cancer, the quasar OJ287 has once again been keeping BAAVSS observers keenly interested over the winter and spring of 2015-2016. Unusually for a quasar, OJ287 undergoes semi-periodic outbursts bright enough to be seen with modest-sized telescopes. Data collected by both professional and amateur astronomers are proving to be of immense value to our study of these enigmatic objects, as well as adding to our knowledge of the recently discovered gravitational wave phenomenon.
A team of astronomers led by Prof Mauri Valtonen (University of Turku, Finland) has been making intensive studies of OJ287 since the 1980s, as well as investigating historical data going back to 1968 when it was first identified as a quasar. By analysing past and current data, they suggested in the 1990s that the outbursts we see are due to a binary black hole, a theory seemingly confirmed by their predictions of impact events during the secondary object’s orbit. The outbursts of 1995/’97 and 2005/’07 were both predicted by the team’s model.[1,2] Not only that, but the model suggests that the black holes are losing energy through gravitational waves, and will eventually merge within the next 10,000 years.
This black hole binary, which we see and record as a 14th magnitude variable star, is truly remarkable. Lying at a distance of some 3.5 billion light years, the system consists of a supermassive black hole of 18 billion solar mass, accretion disc and superluminous jet, as well as a less massive black hole of a ‘mere’ 100 million solar mass orbiting the monster primary in an orbit of around 12 years (Figure 1). As the secondary orbits the primary it interacts and ‘punches’ through the accretion disc twice in its orbit, resulting in a massive bubble of hot gas being expelled from the disc – these disc events are separated by around 2 years. The thermal radiation of the gas manifests itself into an increase in visible light which can be monitored as outbursts by modest-sized telescopes on Earth.
The predictions also account 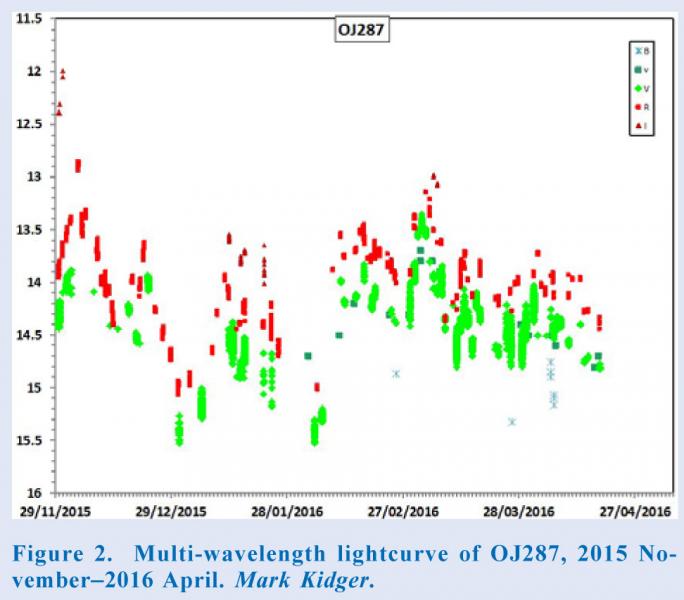 for an accurate spin measure for the primary black hole, as the orbit of the secondary is affected by the rate of spin from the primary. Predict the orbit, and calculate the spin of the binary. Valtonen’s calculations of the data reveal that the primary’s spin is around a third of that allowed by general relativity – a Kerr parameter of 0.313.
The last two outbursts of OJ287 (1995/’97 and 2005/’07) were well covered by BAA VSS and Deep Sky Section observers both visually and with CCDs, with the latter event in particular receiving excellent coverage from both BAA and The Astronomer (TA) observers.[3] The disc event of 2015/’16 has been less well observed, but visual and CCD data obtained from BAA observers David Boyd, Guy Hurst and Gary Poyner throughout the winter and spring period of 2015/’16 have been reported to Dr Mark Kidger (Herschel Science Centre, ESA) and Prof Staszek Zola (University of Warsaw), and have helped confirm the predictions made for the first impact. The outburst peaked on 2015 Dec 5, right on schedule (Figure 2). Analysis of the 2015 event has been published in the Astrophysical Journal,[4] with Boyd, Hurst & Poyner listed as co-authors of the paper.
The next disc event is due in 2019, but unfortunately this will occur very close to solar conjunction with OJ287 just 22° from the Sun when the outburst is predicted. How the data will be gathered at this near-impossible time is currently the topic of much discussion.
Gary Poyner