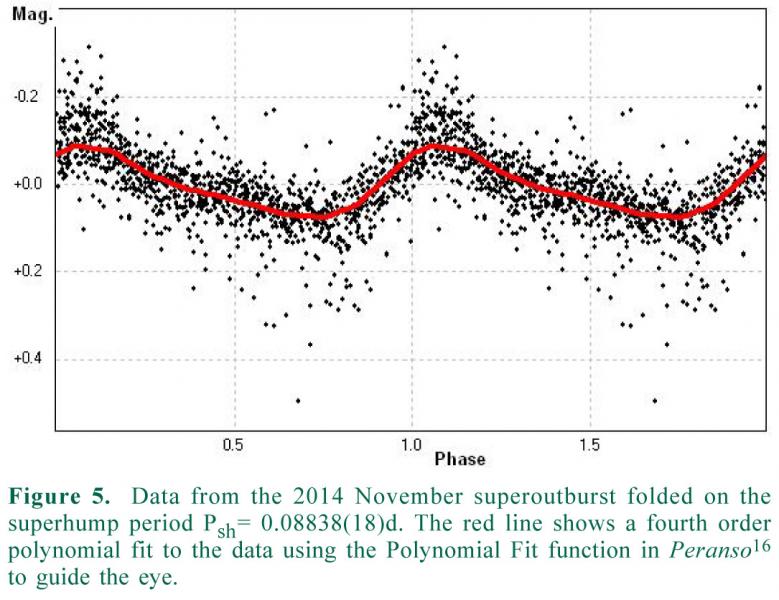 Dwarf novae are a class of cataclysmic variable star in which a white dwarf primary accretes material from a secondary star via Roche lobe overflow. The secondary is usually a late-type main-sequence star. In the absence of a significant white dwarf magnetic field, material from the secondary is processed through an accretion disc before settling on the surface of the white dwarf. As material builds up in the disc, a thermal instability is triggered that drives the disc into a hotter, brighter state causing an outburst in which the star brightens by several magnitudes.
Dwarf novae of the SU UMa family occasionally exhibit superoutbursts which last several times longer than normal outbursts and may be up to a magnitude brighter. During a superoutburst the lightcurve of an SU UMa star is characterised by ‘superhumps’. These are modulations in the light curve which are a few percent longer than the orbital period. They are thought to arise from the interaction of the secondary star orbit with a slowly precessing eccentric accretion disc. The eccentricity of the disc arises because a 3:1 resonance occurs between the secondary star orbit and the motion of matter in the outer accretion disc. For a more detailed review of SU UMa dwarf novae and superhumps, the reader is directed to references (1) and (2).
John Greaves identified CSS 121005:212625+201948 (hereafter CSS 121005) as a likely dwarf nova during his analysis of data from the Catalina Real-time Transient Survey (CRTS) operated as part of the Catalina Sky Survey (CSS). CRTS data show the star varying between 15.5V and fainter than 20.5V (Figure 1). Greaves noted that its colours reported by GALEX (Galaxy Evolution Explorer) were consistent with its being a CV and that both the Sloan Digital Sky Survey (SDSS; g= 16.73, r= 16.85) and the POSS/DSS survey had recorded the star in outburst.
He pointed out that the CRTS data show that it undergoes very frequent outbursts, being ‘in outburst as much as not’, and thus it might be an ER UMa-type dwarf nova. ER UMa stars are a small subgroup of SU UMa-type dwarf novae, which are characterised by very high outburst frequencies (~4 days) and short (19-48 d) supercycles (the time between consecutive superoutbursts). Greaves noted the similarity in the CRTS lightcurve between the ER UMa system RZ LMi and CSS 121005. Given the rarity of known ER UMa systems, Greaves advocated follow-up monitoring of the star to determine its outburst frequency and whether it undergoes superoutbursts.
CSS 121005 lies in Pegasus at RA 21h 26m 25.08, Dec +20° 192 46.34 (J2000.0). It is also catalogued as GSC2.3 N2NM002562, USNO-B1.0 1103-0582665, GALEX J212625.1+201946 and SDSS J212625.08+201946.3. SDSS Data Release 12 identifies it as a blue object, although no spectrum was recorded.
Monitoring of CSS 121005 began in 2012 October following Greaves’ announcement. This was intensified during 2014 as part of a campaign supported by the BAA VSS, and publicised via the baavss-alert email system and the BAA website with the aim of getting as complete a record of the lightcurve as possible. This paper presents the photometric results, including detailed analysis of several of the outbursts detected in 2014.