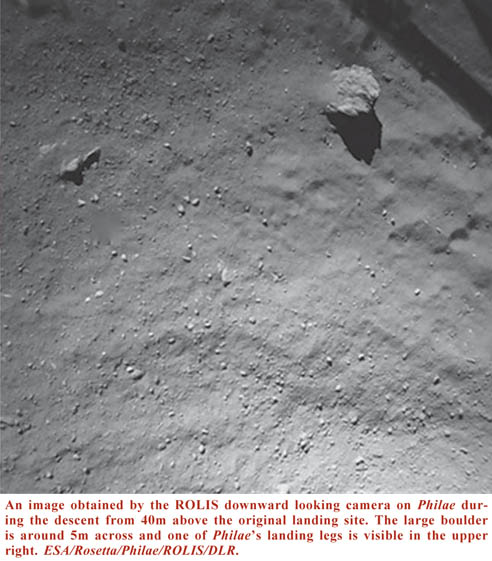 At the time of my report in the October Journal the Rosetta team had identified five possible landing areas on comet 67P and the spacecraft was just about to enter the Global Mapping phase. During this phase it orbited as low as 10km from the surface and obtained spectacular images of the 5×3km nucleus. These images showed a much more complex and rough surface than people had expected and this meant that selection of the landing site for Philae was particularly difficult.

The final site selected was on the smaller lobe of the nucleus. This was originally called site J but is now known as Agilkia, after a small island in the Nile where a number of the original Philae artefacts were moved during the building of the Aswan dams. In preparation for the landing Rosetta left the Global Mapping orbit on October 28 and transferred into a pre-delivery orbit which took it out to 30km from the nucleus.

[Login or click above to view the full article (PDF)]