Proposed memorial sculpture to honour the father of English astronomy 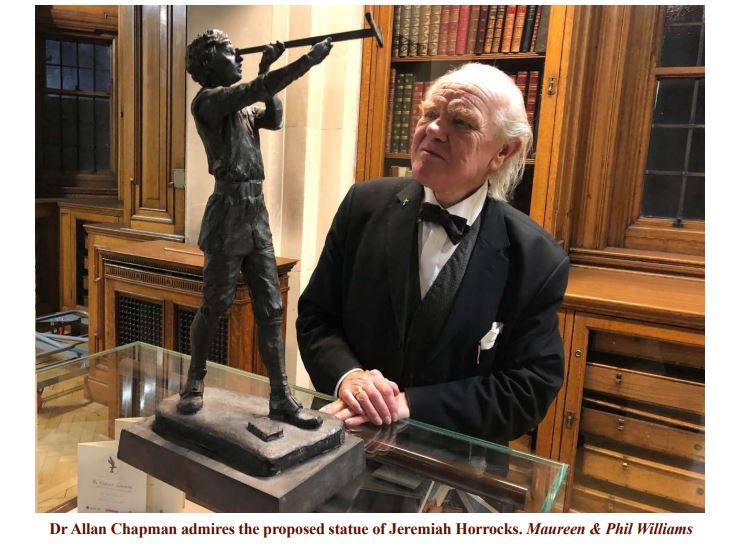 The 380-year-old story of a humble yeoman farmer’s son who, only just out of his teenage years, revolutionised our ideas of the solar system is a tale that sounds like fiction. Now the acclaimed Liverpool-born astronomer Jeremiah Horrocks (1618–1641) is the subject of an ambitious but well-overdue project to create at least one life-size bronze statue in his honour.

A group of local enthusiasts have formed a steering group and came together on Saturday, 2019 Nov 30 at the majestic Edwardian Hornby Library, at the Liverpool Central Library, to launch a crowd-funding campaign to raise over £150,000 for the creation and siting of two statues. One is to be located in Liverpool’s city centre, with the other to be placed in a planned new site at the campus of the University of Central Lancashire in Preston. The exact location in Liverpool has yet to be established, but the Preston campus already has an institute for mathematics, physics and astronomy named in honour of Horrocks, and is located just a few miles south of the Lancashire hamlet of Much Hoole. It was from here that Horrocks famously observed the transit of the planet Venus across the solar disc on 1639 Nov 24; he predicted this event of planetary mechanics at a notably young age and on the eve of the First English Civil War.

Horrocks is generally acknowledged as the link between the greats of orbital and observational astronomy (e.g. Galileo, Copernicus and Kepler) and Newton, Halley and others who followed. Horrocks sadly died in 1641, but if he had lived beyond his 22 years he could well have outshone Newton, who lived into his eighties. If Newton had died at such a young age, he would have been almost forgotten by astronomical history.

At a fundraiser launch event on Nov 30, I introduced speakers and supporters including Dr Allan Chapman, well-known Oxford historian of science and astronomy; Frank Cottrell-Boyce, writer and filmmaker; and talented Liverpool-based artist Philip Garrett who unveiled the proposed design in the form of a small statuette. This depicts the astronomer taking a stellar angular measurement.

Other speakers included Prof Andy Newsam of Liverpool John Moores University and Michaela Mitchell of Liverpool Life Sciences UTC. The latter gave details of an educational and public outreach programme, which instates Horrocks into the syllabus for local Merseyside schools, and uses him as a role model for future scientists and a standard-bearer for social mobility.

The statue project has strong support both nationally and locally – namely, from the local astronomical societies of Liverpool, Manchester, Salford and Preston. The project has received the endorsement and wishes of success from the Society for the History of Astronomy, members of the Heritage Committee of the Royal Astronomical Society, and British Astronomical Association.

Thanks go to the steering group, Liverpool AS, BBC Radio Merseyside and staff at Liverpool Central Library.

Gerard Gilligan, Chairman, the Society for the History of Astronomy