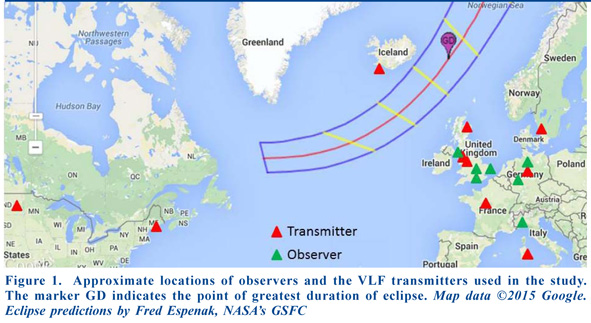 The solar eclipse event of 2015 March 20 provided an opportunity to observe how ultraviolet and X-ray emissions from the Sun affect the ionosphere, that layer of the Earth’s atmosphere above about 50km which is primarily created by these emissions. These high energy photons ionise the air’s constituent molecules to form plasma, a sea of disassociated electrons and positively charged ions which, in turn, interacts with radio waves. Such interactions are complex, including both absorption (i.e. attenuation of the signal) and refraction, driven by the frequency of the radio signal and the plasma density.
These effects follow a daily cycle but our Sun is also a variable star with its own 11-year period. Solar activity dramatically modulates the daily pattern, the most prominent effect at radio frequencies being the Sudden Ionospheric Disturbance (SID) events that occur nine minutes (the time it takes for the emissions to reach the Earth) after an X-ray flare erupts on the Sun.  (continued…)