One of the great joys of observing variable stars is the unpredictability in the way they behave. You can of course predict when the magnitudes of some stars will be rising or fading, but not by how much. Dwarf nova outbursts will catch you unawares, and red stars can surprise by how bright or faint a maximum or minimum will be.

But surely the most unpredictable of all the variables we observe are the RCB stars, named after the prototype ‘R’ in the constellation of Corona Borealis – the brightest and most famous member of this group.

Almost completely devoid of hydrogen and consisting of carbon, cyanogen and various metals, these type F–G supergiants are the rarest type of stars known. The unpredictable variations in magnitude are caused by clouds of dusty carbon ejected in random directions. If ejecta is directed in the line of sight for an observer on Earth, this has the effect of dimming the light received from the star. Over time the dusty clouds disappear, and the star returns to its normal level of brightness. This process might take weeks or years, and one never quite knows what to expect at the eyepiece when the telescope is directed at one of the 126 known RCB stars. 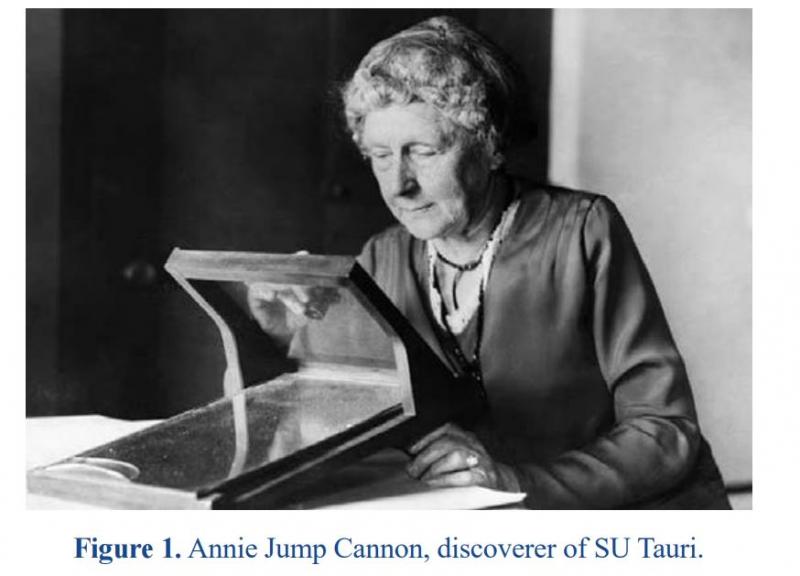 We are fortunate in the UK that the winter/spring sky allows us to observe one of the most active of these stars – SU Tauri. Discovered in 1908 by Annie Jump Cannon (Figure 1), SU Tau has been under constant observation by BAA VSS observers since 1962 (Figure 2). The maximum magnitude is given as +9.1 in the Variable Star Index of the American Association of Variable Star Observers (AAVSO),1 but the mean is closer to +9.5. The depths of minima range from magnitude +15.0 to below +19.0V (the record V-band low occurred in 2014 September at +19.12V, although a magnitude of +20.6TG had been reported in 2012 September).2

Much has been written recently of the record fading events that the prototype star R CrB has been experiencing since 2007, but SU Tau has been having its own fading experiences which have seemingly passed under the radar. In 2009 February, SU Tau began a fade which would take the star to a deep magnitude of +18.0 by 2010 January. A recovery to mean magnitude +10.6 by 2011 November was followed by a further fade to +17.4V by 2012 January. This was followed by two further short-duration fading events, before a deep low of +18.5C was recorded in 2014 December.

Unlike its precursors since this current active phase began, the recovery from the 2014 December low was seen to be long and gradual – some four years, peaking at magnitude +11.5 in 2018 December. There then followed a further fading to magnitude +15.0 by the end of 2019 March. When the field was recovered in the autumn sky in 2019, SU Tau had once again recovered to magnitude +11.5, and at the time of writing (late December), it remains around magnitude +11.0.

This means that SU Tau has spent (to date) 3,965 days or 10.8 years below maximum magnitude. This is the longest series of fading events without returning to maximum brightness seen since its discovery in 1908. 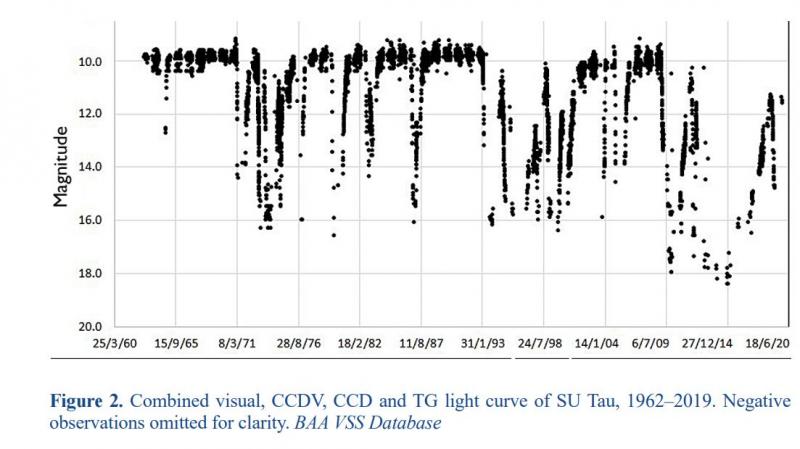 Observing SU Tau can be a frustrating experience. The field lies in an ecliptic constellation of course, which means we have periods each month when moonlight pollutes the surrounding sky and observing is made quite tricky if not impossible. We also have the Sun passing through Taurus in the summer months of May and June, resulting in seasonal gaps in the light curve. Despite this, SU Tau can be monitored from late August / early September through to the end of April, giving an eight-month window for us to monitor its behaviour.

As to when this record-breaking period of activity will end, we will need to keep looking closely to answer that question. One thing is for sure – this is certainly a star to keep your eyes (or CCD camera) on.

Finder charts for SU Tau and hundreds of other variable stars are freely available to download from the BAA VSS web page.

Keen-eyed visual observers may have noticed that the bright red supergiant star Betelgeuse (alpha Orionis) appears a little fainter of late. In fact, the star has been fading gradually since late summer 2019. According to the AAVSO International Database, visual observations show a decline from early August to present (2019 Dec 20) of 0.4 magnitudes to +1.5. V-band photometric data is a little more realistic, with a fade from +0.6V in August to +1.2V by Dec 18. This is close to the levels reached in the late 1970s, when Betelgeuse approached magnitude +1.5.

Betelgeuse is an SRC-type variable star (semi-regular), with a catalogued magnitude range of 0.0 to +1.3V and a primary period of 423 days. SRC stars have complex light curves, often with several periods ranging from 30 days to several thousand days. It is notoriously difficult to make a naked-eye magnitude measurement of the star, since its redness introduces heavy scatter into the light curve as each observer’s ‘red bias’ is different. The dearth of suitable comparison stars in the area adds to this problem.

It will be interesting to see at what brightness Betelgeuse will be when it leaves our skies during the spring.