RCB stars are extremely rare, hydrogen deficient, carbon rich giant stars whose luminosity varies in two ways – small amplitude pulsations, and much more dramatic deep fades of up to ten magnitudes; the latter are totally unpredictable. The fades are caused by the ejection of carbon ‘soot’ clouds, which obscure the star’s light if the material is ejected towards the observer. Minimum magnitude can last for weeks or many years before a recovery sets in, which is usually much slower than the initial fade. The prototype star in this class, R CrB, has been below maximum brightness since 2007 and has not yet returned to its normal magnitude of 5.8–6.0. The BAA Variable Star Section (VSS) have twelve RCB stars on their observing programme.[1]

SV Sge has been monitored by the Section since May 1988,[2] and an even longer dataset exists in the American Association of Variable Star Observers (AAVSO) database going back to 1938 (albeit with a 24-year hiatus between 1942–’66).[3] During this time, 13 fading episodes have been observed with a varying degree of depth, between magnitudes 12.0 & 16.5. 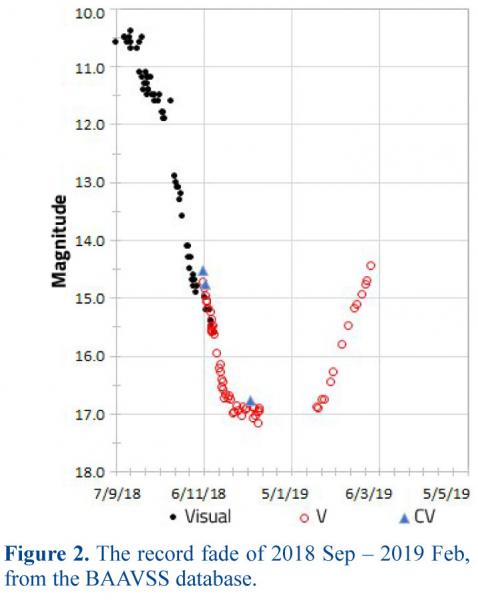 However, on 2018 Sep 28, BAAVSS observer John Toone reported to the Section alert group that SV Sge had faded from its ‘normal’ brightness of 10.5 to 11.4 in just a few days. Further visual and CCD observations by VSS observers then recorded the fade to magnitude 17.1V, before the field became extremely difficult to observe in the evening twilight. This exceeded the deep fade of 2004 April by 0.7mag.

To continue monitoring the fade and any possible recovery, Martin Mobberley booked time on several iTelescope instruments and continued to observe SV Sge when it became impossible to do so from the UK. Following a five-week gap from Dec 14 to Jan 22, Martin picked up the field again with iTelescope and recorded SV Sge slightly brighter at 16.9V. From this point, SV Sge began to recover slowly, reaching magnitude 14.44V by Feb 28.

The generally accepted official catalogue of variable star data is the AAVSO Variable Star Index (VSX).[4] Following a communication from the VSS, the data in the catalogue have now been changed to reflect the new low value recorded by BAAVSS observers.

RCB stars are however unpredictable, and although SV Sge is now recovering in brightness, we can’t be sure this recovery will continue. The star may pause or fade again before reaching maximum brightness. Observers are asked to monitor the brightness of SV Sge as often as possible over the coming weeks.