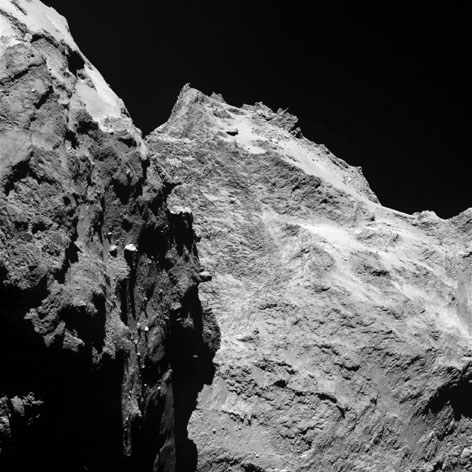 After over ten years in space and more than four orbits around the Sun the European Space Agency’s Rosetta spacecraft finally arrived at its target, Comet 67P/Churyumov-Gerasimenko, on August 6. On that day Rosetta executed a small thruster burn lasting 7 minutes that changed its velocity by 1 m/s and put it on the first arc of a triangular trajectory around the comet. This ‘orbit’ is not dynamically stable and needs a thruster burn at each vertex in order to maintain station with the comet, but it was the first time in history that a spacecraft had gone into orbit around an active cometary nucleus. The initial range to the comet was around 100km.
Rosetta carries a large number of scientific instruments but the imaging cameras have been the most prominent so far. There are two scientific cameras: OSIRIS-WAC, a wide angle camera with a field of view of 12°, and OSIRIS-NAC which has a much higher angular resolution and a FoV of 2.2°. Both cameras use E2V 2Kx2K CCDs. There is also a navigation camera, NAVCAM, which is operated directly by ESA and has an intermediate resolution. The release of images from OSIRIS has been limited due to an agreed scientific proprietary period but NAVCAM data has been released on an almost daily basis.
Early images from OSIRIS-NAC released unofficially in mid-July showed that the nucleus appeared to consist of two lobes, and there was speculation that 67P was two objects in close proximity – a contact binary. Later images taken after rendezvous (see front cover) show that it is more likely to be a single object, and that the ‘neck’ region has been repeatedly eroded by sublimation at each return to the Sun. The comet’s nucleus is around 5x3km in size and these images show an extraordinary amount of surface variation for such a small object.
Careful tracking of the spacecraft’s radio signal allows us to measure its trajectory very accurately and this leads to a very precise measurement of acceleration due to the nucleus’ gravitational field. Early results indicate that the comet’s mass is around 1013 kg (±10%) but this figure will be improved significantly over the coming weeks. More precise measurements will also enable characterisation of the distribution of mass (and hence density) within the nucleus. These results are not only scientifically important but they are required for navigation of the spacecraft as the range to the comet reduces over the next month or two.
At the time of writing (early September) Rosetta is transitioning into the Global Mapping phase. This lasts from September 10 to October 7 and the range to the comet will be reduced to 29km. At this distance it is expected that the spacecraft will be actively captured by the comet’s gravity and enter a true, approximately circular, orbit, although this will require continuous monitoring and correction. It should then be possible to reduce the range to 19km with Rosetta orbiting along the terminator so as to stay permanently on the Sunlit side of the nucleus. The most recent OSIRIS-NAC images have a resolution of around 1m/pixel (Figure 1).
The spacecraft is currently very healthy with everything operating as expected. Radio tracking, commanding and telemetry reception has been provided by ESA’s deep-space stations at Malargüe, Argentina, and New Norcia, Australia. In addition NASA DSN stations at Goldstone and Madrid have been used as required.
One of the main objectives of the mission is to deploy a lander, Philae, to the surface of the comet. The lander will be ejected from the orbiter in November and will travel to the surface with no ability to make course corrections en route. When it lands it will deploy harpoons to secure itself and will take images and make measurements of the comet. Potential landing sites are currently being considered as part of the mapping effort.
The selection of a landing site will be a compromise between engineering constraints (lander operation, data return and navigation) and scientific goals. A key constraint is that uncertainties in the navigation of the orbiter mean that it is only possible to specify a given landing zone in terms of an error ellipse with an area of around 1 km2. At the time of writing ESA have selected five potential landing sites, labelled A, B, C, J, I in Figure 2, but by the time you read this the primary option should have been announced.
Comet 67P has an orbital period of 6.5 years and is currently around 520 million km from the Sun. At this distance the nucleus is relatively quiet but OSIRIS-WAC has already imaged faint jets of material emanating from the ‘neck’ region.
From Earth the comet is currently a 20th magnitude object moving among the many stars of southern Sagittarius. Images using the ESO VLT telescope in Chile taken in mid-August (Figure 3) show a faint asymmetric coma consisting mainly of dust. This dust has been detected in situ by Rosetta’s Grain Impact Analyser and Dust Accumulator, GIADA. The first detection was made as early as Aug 1, when Rosetta was 814km from the comet. Further impacts from three more dust grains were detected on August 2, 4, and 5. From the measured momentum of the impacts, it was possible to estimate the sizes of the collected grains and the largest was about 0.35mm across.
From Earth, 67P could reach 9th magnitude in the morning sky in 2015 September. Before then it will be fascinating to follow the mission as the comet heads in towards perihelion in 2015 August. The latest results are available at the ESA website (blogs.esa.int/Rosetta) and I recommend that you visit it frequently.