Despite being one of the smallest constellations in the sky – only Crux and Equuleus are smaller – Sagitta is also one of the most distinctive and really does look like an arrow. Although the brightest of its ‘shape’ stars is only mag. +3.5 – with the others ranging between mag. +4 and +5 – it is still an easy object to pick out in the summer Milky Way from a rural location. It lies around 10 degrees south-east of Albireo (beta Cygni), the beautiful double star that forms the swan’s head, and from the UK it will be found around 57 degrees up in the southern sky towards the end of August.

Sagitta features widely in mythology and has been associated with many dastardly assassinations, from the arrow that Apollo used to slay the Cyclops, to the arrow that slew the Eagle of Jove. But, in a slightly less blood-thirsty guise, it has also been identified as Cupid’s arrow.

The premier and most popular deep sky object within its boundary is undoubtedly the globular cluster Messier 71. There are other treats within its confines that are well worth tracking down, including another globular cluster, but these will be much more of a challenge (certainly for the visual observer).

Charles Messier observed M71 in 1780 October and in his notes refers to it as being discovered by his observing colleague Pierre Méchain in 1780 June. He was unaware that it had already been observed by Johann Gottfried Koehler in 1775, and was probably discovered by the Swiss astronomer Jean-Philippe Loys de Chéseaux in 1746. Messier described M71 as ‘…very faint and [it] contains no stars. The slightest illumination causes it to disappear.’ M71 lies at RA 17h 53m 47s and Dec. +18° 46′ 45″, which puts it almost exactly between and very slightly south of the two stars gamma and delta Sagittae. Although Messier was unable to resolve any stars in M71, no one observing the cluster nowadays with a modern small telescope (say a 150mm reflector or 80mm refractor) should have that problem. Small binoculars will also show it as a misty patch. Because the globular is very open and lies in a rich region of the Milky Way, wide-field images will give the most aesthetically pleasing view.

For a long time there was uncertainty as to whether M71 was a very open globular cluster or a very dense open cluster. The problem concerned the lack of any central condensation, plus the absence of RR Lyrae-type variable stars that are commonly found in globulars. Latest photometric measurements, however, have detected a short horizontal branch in the HR diagram, characteristic of globulars, with the shortness of the branch being due to the cluster’s relatively young age (around 9 billion years). This young age also explains the absence of cluster variable stars and it is now generally considered that M71 is a globular, albeit one of the loosest, with a ranking of XII (the most open) in the Shapley–Sawyer concentration class.

M71 is a popular imaging target within the Deep Sky Section and a selection of images from the archive by Dale Holt, Andrea Tasselli, the late Maurice Gavin, and Nick Hewitt is shown here. Perhaps fittingly for a cluster buried in a constellation that represents an arrow, M71 presents a triangular or arrow-shaped appearance. This is very obvious in Andrea Tasselli’s image and Dale Holt’s sketch, while the wider-field images from Maurice Gavin and Nick Hewitt clearly show the cluster as a condensation among the rich background of faint field stars.

The brightest globular clusters visible from our latitude were discovered by Charles Messier and his co-workers and ended up in his catalogue with the famous M designation. The vast majority of the remaining clusters were observed by William and John Herschel, and were given NGC numbers by Dreyer when he pulled together lists produced by various observers in his epic 1888 catalogue. Except for the addition of a few IC globulars (an extension, twice, by Dreyer to the NGC), nothing else of significance was discovered until the Palomar Observatory Sky Survey (POSS) took place in the 1950s using the 48-inch Oschin Schmidt telescope on Mount Palomar. Examination of the Schmidt plates led to the discovery of many new objects, including 15 globular clusters. 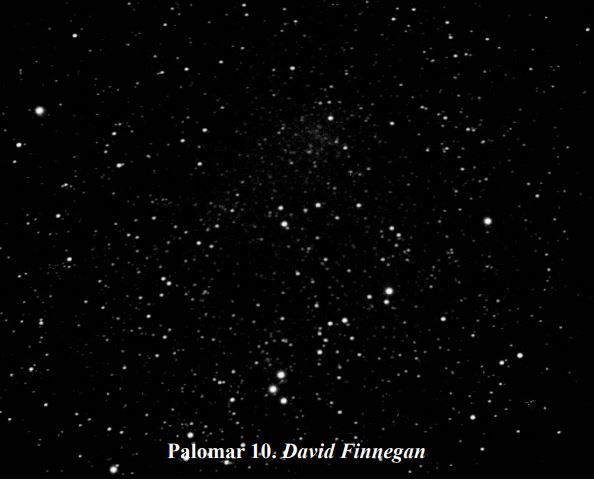 One of these, Palomar 10, was discovered in 1955 by the American astronomer Albert Wilson. Embedded in the Milky Way, the cluster is heavily obscured yet is recognisably a globular. Located within Sagitta at RA 19h 18m 2.1s and Dec. +18° 34′ 18″, it has a visual magnitude of +13.2 and like M71 is a class XII object. Appearing smaller than M71, it has a diameter of around 3.8arcmin compared with 7.3arcmin for its big brother, and lies at almost twice the distance at 20,000 light years.

Although one of easiest Palomar clusters to image, it is certainly not an easy visual target. There is a sketch by George Kepple in The Night Sky Observer’s Guide, Vol. 2 (Willmann-Bell 1998, ISBN 0-943396-60-3) made with a 17.5-inch (44cm) ƒ/4.5 Dobsonian from the USA, which shows the cluster as an unresolved haze but I am not aware of any visual observations from the UK. Anyone attempting the challenge will need a telescope in the half-metre class along with a night of exceptional transparency and stability – not common occurrences in the UK, unfortunately. Two images of Pal 10 have been sent to the Deep Sky Section and are shown here. One is by David Boyd (250mm ƒ/3.6 Newt.), who has imaged most of the Palomar clusters, and the other by David Finnegan (305mm ƒ/6.3 Meade ACF). These images confirm what a challenging visual object Pal 10 will be. 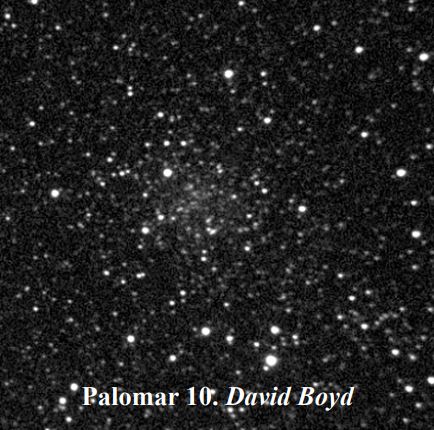 If spring, when our view is into deep space and away from the plane of the Milky Way, is galaxy hunting time then summer, when the Milky Way arches overhead with its glorious star clouds and nebulae, is planetary nebula hunting time. Although a small constellation, Sagitta contains three planetaries: IC 4997, NGC 6879 and NGC 6886. They are certainly not grand objects, but they are challenging without being too difficult and certainly worth a viewing. I have observed them all in a 14-inch (35cm) Dobsonian from a mag. +5 site. Unfortunately there are no images of these objects in the Section records.

IC 4997 was discovered on a photographic plate by Williamina Fleming in 1896 while working at the Harvard College Observatory. Williamina was from Scotland and moved to Massachusetts in 1878. She initially worked as a maid in Edward Pickering’s household before, realising her abilities, he appointed her to the observatory staff. She is remembered now for her work on the spectral classification of stars. IC 4997 (RA 20h 20.2m, Dec. +15° 45′) is a very young planetary, possibly only a few hundred years old, and although having a stated magnitude of +10.5 it has been shown to vary in brightness by around half a magnitude over a period of 20 years. Visually it will appear stellar, even at high power, and will really require blinking with an OIII filter to confirm its planetary nature.

NGC 6879 (RA 20h 10.5m, Dec. +16° 55′) is another stellar object, although fainter at magnitude +12.5. Discovered by the American astronomer Edward Pickering in 1883, it is an easy object to find and a relatively simple three-degree star hop from eta, the tip star of the arrow. An OIII filter will be essential to confirm its planetary nature, although large telescopes at high power may show a small (circa 5arcsec) disc with some central brightening.

Our final planetary in Sagitta is NGC 6886, discovered by the British astronomer Ralph Copeland (of Copeland’s Septet fame) from Dun Echt observatory in 1884. Located at RA 20h 12.7m and Dec. +19° 59′, it has a visual magnitude of +11.4. It is another easy star hop from the tip of the arrow, lying less than two degrees due east of eta. Although it has a quoted diameter of 6arcsec, this size is misleading as it includes the faint nebulous wings of material expelled by the planetary during its 1,500 or so years of expansion. Visually it appears as a slightly fuzzy star with a central brightening.

With its small size Sagitta is often overlooked by the deep sky observer, but because of its position in the Milky Way it is a constellation that contains more than its size suggests it should. A good observing guide (e.g. The Night Sky Observer’s Guide, mentioned previously) will show that in addition to the objects mentioned here there are also emission nebulae and open clusters to tempt the observer. Good hunting and do send your observations to the Deep Sky Section.