Sailing with the Argonauts

Puppis is an interesting constellation. Originally it was part of the huge southern constellation of Argo Navis (the ship in which the Argonauts sailed to the mythical land of Colchis in order to find the Golden Fleece), and one of the 48 constellations listed by Ptolemy in the Almagest. Astronomers of the 18th century, however, found its large size unwieldy and so in the 1750s the French astronomer and surveyor Nicolas Lacaille divided it into four separate constellations: Puppis, Carina, Pyxis and Vela. Puppis, the largest portion of the dismantled constellation, forms the ship’s stern and covers around 38° of declination.

Lying in the southern winter sky for UK observers, this large declination range unfortunately means that a large part of the constellation remains well below the horizon. For example, magnitude +2.9 tau Puppis has a declination of just over –50° so from mid-UK latitudes, where your theoretical horizon is around –38° and your more useable one –28°, it will never be seen. Zeta Puppis (magnitude +2), a brilliant blue-white star and one of the hottest and most luminous visible to the naked eye, is unfortunately also well below the UK horizon.

By now, and quite reasonably, you may be wondering why I am discussing a constellation that is mostly invisible from the UK. The reason is that the part of the constellation you can see contains some lovely objects. Lying in the faint winter Milky Way, where star clusters abound, it is an ideal region for sweeping with binoculars. Yet because so much of the constellation remains below the horizon, the whole of it largely gets written off by UK observers as not worth bothering with. This is just not the case. 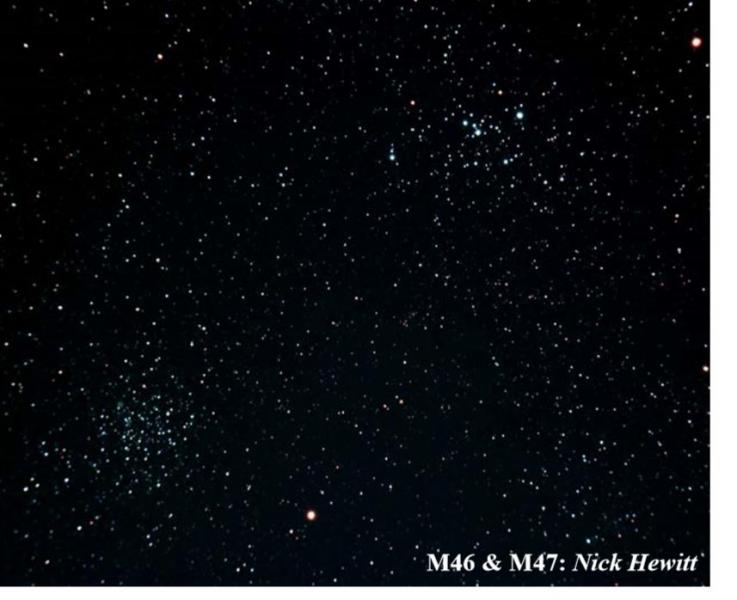 Comet hunter Charles Messier, observing from Paris in the 18th century, recorded three open clusters here: M46 and nearby M47 in 1771, and M93 in 1781. M46 (RA 7h 41.8m, Dec. –14° 49′) and M47 (RA 7h 36.6m, Dec –14° 29′) lie only 1.5° apart but are quite dissimilar clusters considering they are such close neighbours (they actually lie at vastly different distances). M46 is the richer of the two and a 150–200mm telescope will show what a glorious sight it is, with around 80-plus stars of 11th/12th magnitude over an area of 25arcmin. Through the eyepiece it always reminds me of M37 in Auriga, my favourite open cluster. Because of the faintness of the stars in M46, small binoculars will show just a hazy glow but it is still worth hunting down.

M47, on the other hand, is a much brasher cluster, and at magnitude +4.5 will be a naked-eye object for those observers heading to warmer climes and with dark skies during the winter months, or perhaps even visible from southern Britain if you have a good dark site with a clear horizon. With 60-plus stars ranging in brightness from 6th to 11th magnitude, it is a fine sight in small binoculars. A relatively young cluster, circa 60 million years in age, it lies much closer than M46 at around 1,700 light-years compared to 5,000 light-years for the former. Because the clusters lie so close together in the sky, they are both visible in the same binocular field – something that I always find a bonus.

One feature that ordinary binoculars will not show is an interloper in M46: the magnitude +11 planetary nebula NGC 2438. A William Hershel discovery of 1786 March, its position is thought to be a line-of sight-effect, with the planetary lying at about half the distance of the cluster. It is also considerably older than the cluster, with an estimated age of 300 million years. 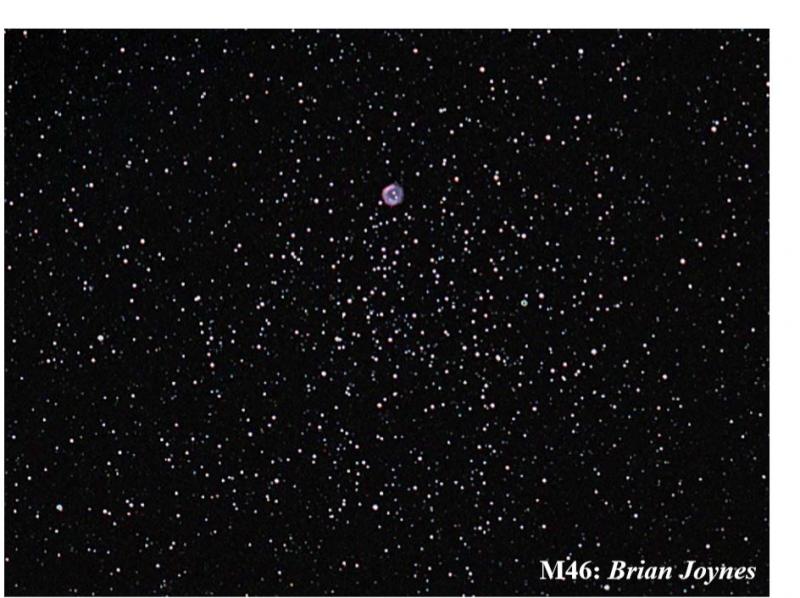 Visually, the appearance of planetaries varies considerably depending on telescope aperture. Large telescopes equipped with nebula filters, such as OIII, will generally show a much larger object since more of the expelled outer red-giant envelope becomes visible. In the case of NGC 2438, small telescopes will show a clearly fuzzy star while increased aperture and high power will show a small (~60arcsec) annular disc. The white-dwarf central star has a magnitude of +17.7.

Nick Hewitt photographed M46 and M47 from his observatory in Northampton in February this year, using a Starwave 70mm triplet and Canon 60Da camera. The exposure of 20×60s nicely framed both clusters together. M46 is to the lower left and M47 to the upper right of the image, shown here.

Differences between the two clusters are immediately apparent, with M46 displaying a mass of similar magnitude stars while M47 is more open with a wide range of magnitudes. One feature of M47 which is very noticeable visually – and can just be glimpsed here – is how many of the stars appear to be arranged in chains; a common feature of many open clusters.

The scale of Nick’s image is too small to show the planetary nebula in M46, but it can be seen well in the image shown here, taken in 2007 by the late Brian Joynes. Unfortunately, no details accompanied the image when it was sent to the Deep Sky Section.

The third Messier cluster in Puppis, M93, lies 10° further south than its two companions (at RA 7h 44.6m, Dec. –24°) so is not an easy imaging target from the UK. Those extra degrees of negative declination have a big effect on seeing quality and sky transparency. It has an integrated magnitude of +6.2, similar to M46. Estimating the diameter of open clusters in rich areas of the Milky Way is fraught with difficulty, but that of M93 is thought to be similar to the other two Messier clusters at 20arcmin. It is estimated to lie at a distance of 3,600 light-years.

Observing M93 visually in a 62mm Zeiss refractor, I found it a relatively easy target where it appeared as a thin wedge-shaped patch of mottled nebulosity, with faint stars visible with averted vision. It was very easy to see how Messier could have mistaken this cluster for a comet. In a large aperture, it is a stunning sight.

Despite its low declination, Grant Privett imaged M93 from his base in the West Midlands in 2009. He used a 250mm ƒ/4.4 Newtonian and Starlight Xpress MX7 camera, stacking 45×45s exposures. His image is shown here. The low elevation has clearly had an effect on the star images, despite much image processing by Grant.

Paul Downing also imaged this cluster, but from Houston, Texas, where the latitude was a healthy 30°N rather than the 52°N that Grant had to contend with. Paul used a Celestron C14 fitted with an ƒ/6.3 focal reducer and SBIG ST7 camera. The exposure was 5min, taken in 2000 December. The result is shown here. The wedge shape of the cluster, so obvious visually, can be well seen in Paul’s image (it is difficult to directly compare the orientation of Paul’s image with Grant’s, because of different optical configurations in the two telescopes used). 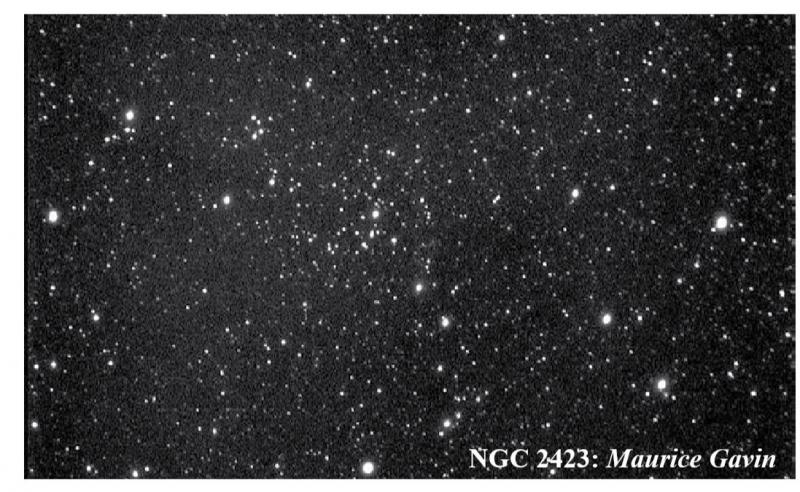 Returning north to a more sensible latitude, there is another cluster that is worth examining. NGC 2423 lies just over 0.5° north of M47, at RA 7h 37.1m, Dec. –13° 52′. Shining at magnitude +6.7, with a diameter of around 15arcmin it at first appears to be just an enrichment of the local Milky Way but, as Maurice Gavin’s image from 2008 shows, it is a clear independent cluster and hosts around 70 stars of 11th magnitude. Maurice obtained this 12×20s exposure from his observatory in Worcester Park, south-west London. He used his Meade ETX 70 and Starlight Xpress SXV-M9 camera.

There are numerous other clusters in Puppis accessible to determined observers, including a globular cluster (NGC 2298). But, at a declination of –36°, this is a real challenge from the UK.