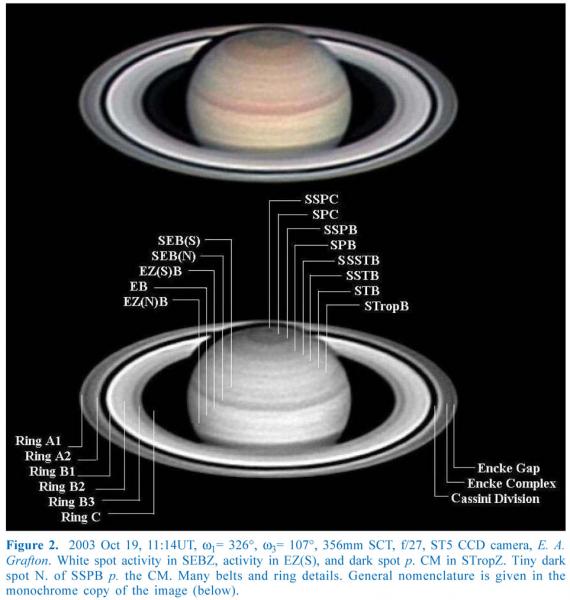 During 2003-’04, with Saturn at perihelion, the rings were fully open upon the south face allowing excellent views of the southern hemisphere and up to 12 belts. Since 2002-’03 there had been an obvious darkening of the S. Polar Region, though the existing lighter area in the centre of the S. Polar Cap had become more conspicuous. Spot activity was noted over a wide range of latitudes from the N. edge of the S. Polar Cap to the southern Equatorial Zone. White spots in the South Tropical Zone and South Equatorial Belt Zone continued from the previous apparition and showed similar drift-rates. The southern Equatorial Zone showed the same slow drift-rate that has been apparent since 1994-’95, and dark spots on the SEB(N) also exhibited a period slower than System I. The occultation of the star SAO 78867 by the rings and globe was witnessed by several observers in the UK and USA.

The period of the 2003-’04 apparition was defined by solar conjunctions on 2003 Jun 24 and 2004 Jul 8. Shortly after the earlier date, and before BAA observations commenced, Saturn arrived at perihelion on Jul 26. The planet came to opposition in Gemini on Dec 31 with the rings virtually fully open, and at declination +22°. At opposition the value of De equalled -25°.5, varying only from –24°.8 to -26°.3 during the period of observation from 2003 Aug 20 (Gray) till 2004 Jun 5 (Yunoki). Dr R. D. Bowen submitted a fine series of 48 visual observations, and Dr W. P. Sheehan was able to make a fine drawing with the Lick refractor (previously published in the Journal). New imaging contributors were numerous. Most of those in Table 1 sent images, but the number of visual observers and visual observations fell, especially in the area of intensity estimates (Table 2), even if their data were in excellent accord….(continued)(Login or click above to view the full illustrated article in PDF format)