During 2004-’05 the angle of opening of the rings fell slightly from the 2003 maximum to -22°.9 at opposition. The planet’s atmosphere was relatively quiet: white spot activity in the South Tropical Zone considerably declined, but the South Equatorial Belt Zone remained active, with two white ovals slowly converging in longitude. One SEBZ white oval endured for more than seven months, much longer than any such feature from 2003-’04. A small amount of activity was again recorded outside these latitudes, at the N. edge of the SEB and in the EZ(S), and the slow Equatorial Current of 1994-’95 onwards was still in operation. The reappearing N. hemisphere was bluish in contrast to the warm-tinted south. The disk of Titan was resolved by visual and imaging observations, and one image indicated a colour/intensity difference between the north and south hemispheres.

An Appendix presents a summary of all the rotation periods derived by members of the Saturn Section since 1891 and an analysis of wind speed by latitude, with a comparison with recent data from the Cassini mission. 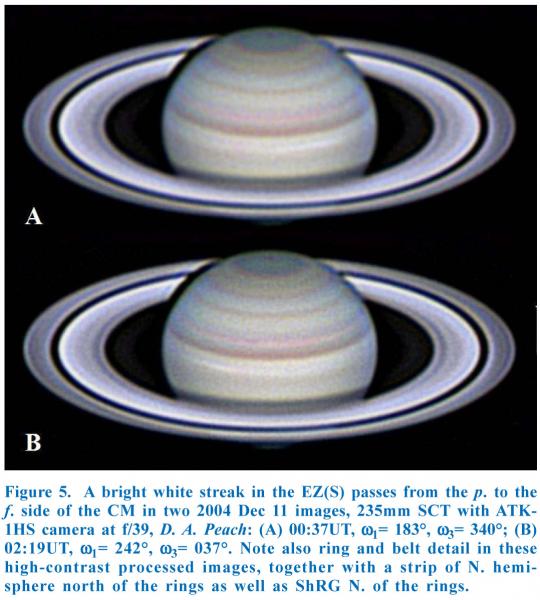 Introduction
The 2004-’05 apparition was very well observed, though the planet showed less atmospheric activity than in the previous apparition. Many images were obtained at visible, infrared, ultraviolet and methane band wavelengths. The decline in visual observation continued, but enough data were submitted for good average visual intensity estimates. The planet was at opposition in Gemini on 2005 Jan 13 (the previous opposition having occurred on 2003 Dec 31, so there was none in 2004), at declination +21°. Solar conjunctions occurred on 2004 Jul 8 and 2005 Jul 23. Our observers monitored the planet from 2004 Aug 15 (Gray) till 2005 Jun 9 (Yunoki). The rings had closed slightly, and at opposition the sub-Earth latitude (De) equalled -22°.9, having reached a minimum of -21°.7 in 2004 November. The value of De would rise to a temporary maximum of -23°.9 in 2005 March.

A short note about the Section’s work appeared in the report of Council, and Dr R. A. H. Paterson published a drawing of the planet made with the 32cm reflector previously owned by W. T. Hay. Online archives were maintained by the International Outer Planet Watch, the UAI, and the ALPO Japan (JALPON). High resolution imaging was achieved by numerous observers, and high resolution visual work came from Biver, Bowen, Gray, Hernandez and McKim. In 2005 Apr-May, Peach was able to secure some superb images during the first of his trips to Barbados. The spectacular success of the Cassini mission continued, the craft having arrived on 2004 July 1, and we saw the Huygens probe safely reach the exotic surface of Titan on 2005 Jan 14.  An apparition report was published by the ALPO.

The 2004-’05 apparition saw the completion of the second Saturnian year to be observed and reported upon without a break by members of the Association since its detailed post-WW2 programme was created by Dr A. F. O’D. Alexander in 1946. To mark this event, we present an Appendix containing all the reliable rotation periods measured by BAA members since the creation of the Section in 1891. (continued)